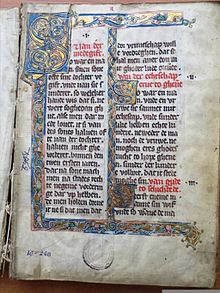 Bardewiker Codex of Lübeck Law, created in the city chancellery in Lübeck in 1294

The Luebian law (also Lübsches law ) was the law adopted by the imperial city of Lübeck , which became valid in over 100 cities in the Baltic Sea region . The law of the city of Lübeck itself is called "Lübeck law".

Statute and town charter of the Imperial Freyen and the Holy Empire City of Lübeck , first High German edition 1586

Heinrich the Lion granted Lübeck various privileges . This gave the city of Soest in 1160 . From this, the so-called Lübische law developed under the leadership of the council. The Luebian law combined the legal concepts from the Westphalian with the Holsteiner land law and adopted the basic rules found in the Baltic Sea area from the time of the Vikings and from the Gotland cooperative in Visby in the area of ​​maritime law . It was the only German city law that later resisted Romanization and retained its German legal origins until the end of the 19th century.

An early summary as a codex took place in 1294 at the instigation of the Lübeck Chancellor Albert von Bardewik in the Bardewik Codex . On behalf of Lübeck's mayor Tidemann von Güstrow , it was written in 1348 by the cathedral vicar Helmicus Thymmonis and then also called Tideman Güstrow's Codex . It was then revised in 1586 and first printed in High German by Johann Balhorn as Der Kayserlichen Freyen and the Holy Reich City of Lübeck Statuta and Stadtrecht . In terms of its constitutional content, Lübeck modified it only once through the Kassare Trial and the Citizens' Recess, and codified its approach.

It was valid in large parts of its distribution area until 1900, when it was replaced by the civil code .

Against decisions by cities with Lübischem law, the appeal was given to the Oberhof Lübeck as an appeal body.

Along with Magdeburg law, it is one of the most important city rights in Germany .