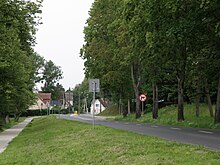 The city is located in Western Pomerania , about 32 kilometers southeast of Köslin ( Koszalin ) on the left bank of the Grabow . The Grabowtal forms a delightful landscape here. Near the city there are two former pagan Slavic pilgrimage sites , in the southwest the Holy Mountain and in the northeast the Varbelow Mountains , also the Twelve Apostles Mountains .

In the second half of the 13th century, the first German settlers, mostly from the Mark Brandenburg , came to the easily accessible ford across the Grabow . Wends had already settled there before them, and they stayed apart in their old living quarters even after the German town was founded. It was called Schidlitz by the Germans and remained independent until the end of the 19th century, although the two tribes mixed with each other over time. Pollnow is mentioned for the first time in the document dated July 13, 1307, with which the Brandenburg margraves Otto, Hermann and Waldemar Peter von Neuenburg confirmed the feudal rights to the place and the castle built in the course of the settlement. His son of the same name gave Pollnow town charter in 1312 . The town and castle were transferred to the diocese of Cammin in 1353 and henceforth belonged to the table goods of the diocese. In 1436 Bishop Siegfried Pollnow and the castle pledged to the Pomeranian Duke Bogislaw IX. Both remained ducal property until Duke Erich II gave the Pollnower Land to his Princely Councilor Peter von Glasenapp in 1472 in exchange for six villages in the Rügenwalder Land.

In 1550 the Reformation was introduced in Pollnow . In 1609, a city fire caused severe damage, the catastrophe repeated itself in 1656 and 1736. The city's first town hall was built in 1613. As a result of the Thirty Years' War , Pollnow was occupied by Sweden from 1537 to 1653 , after which the Brandenburg rulers ruled the country. In 1672 Peter von Glasenapp wrote the “Blue Book of Pollnow”, which also served as a historical source for the city in the centuries that followed. In 1773 Colonel Ernst von Wrangel took ownership of the town, which the family held until 1806.

When Prussia rearranged its district division after the Wars of Liberation in 1815, Pollnow was incorporated into the Pomeranian district of Schlawe ; since 1816 this belonged to the administrative district of Köslin . In 1819 the castle was purchased by Pollnow's citizens. In 1848 they inaugurated their new town hall and in 1852 a new church building was added to the old church tower. Pollnow was connected to the railway network relatively late, and in 1898 only to the Schlawer Kleinbahn. In 1903, when the line to Bublitz was opened, it was connected to the standard gauge network. Because of the poor transport connections, hardly any industry developed in Pollnow, only the branch of a Berlin textile factory was established there. In 1908 a power station went into operation nearby in Beßwitz.

Until 1945 Pollnow belonged to the district of Schlawe in the administrative district of Köslin in the Prussian province of Pomerania .

Towards the end of the Second World War , in mid-February 1945, the city was the only one in the Koslin administrative region to experience a bombing raid in which Soviet planes dropped around 30 bombs. Some houses were damaged by the bombing. Two German companies fended off the Soviet troops on the ground, but had to evacuate the city on February 27, 1945. The civilian population had been evacuated the day before. Numerous houses and the church suffered severe damage from the Soviet artillery. After the city was captured by the Red Army , the center was set on fire by Soviet soldiers and largely destroyed as a result.

Soon after the occupation by the Red Army, Pollnow was placed under Polish administration along with the whole of Western Pomerania . The German city of Pollnow received the Polish place name Polanów . In the period that followed, the returned residents were expelled .

There are partnership relationships with the Hessian town of Gedern and with the community of Rothenklempenow in Mecklenburg-Western Pomerania.

It ranks 38th in the voivodeship in terms of 9,230 inhabitants.

The municipality is traversed from south to north by the Grabowa ( Grabow ) river , which gives the landscape a very tranquil picture.

Neighboring municipalities of Gmina Polanów are:

The urban and rural municipality of Polanów comprises over 82 villages, which are grouped into the following 28 districts ( sołectwo ) :

This also includes the localities and settlements:

In the municipality is also the fulling mill .

Three provincial roads (DW) run through the municipality, two of which cross in the city of Polanów:

Polanów has not had a direct rail connection since 1945. It is ten kilometers to the next train station Przytocko ( Pritzig ) on the Piła – Ustka ( Schneidemühl - Stolpmünde ) line.

Before 1945 three railway lines met in the area of ​​today's Gmina Polanów, all of which were shut down after the war and largely dismantled:

Parishes in the Koszaliński Powiat