The Kashubian (older also the Kassubische, Kashubian kaszëbsczi JaZeK ) is a West Slavic language , the west and south of the area in Gdansk , according to estimates of about 300,000 Kashubians understood and actively of approximately 108,000 people as colloquial language is spoken. According to the European Charter for Regional or Minority Languages, Kashubian has had the status of a regional language in Kashubia since 2005 . Kashubian is an endangered language .

Kashubian is most closely related to the extinct Slovinian ; Kashubian and Slovincian, together with the extinct languages Pomoran (Baltic Slavic) and Polabian (Elbe Slavic, Drewan), form the group of Elbe-Baltic-Slavic languages, which together with Polish form the Lechic subgroup of West Slavic :

Kashubian shares a large part of the hereditary vocabulary with Polish , later it was heavily influenced by Polish in grammar , word formation and vocabulary. The most important differences to Polish are substrate elements from Old Prussian (an extinct Baltic language ), a larger proportion of Low German and High German loanwords (approx. 5%), vowel dropouts in unstressed syllables and other stressing rules: In the south, Kashubian emphasizes the first syllable, in the north the emphasis is flexible. It is also characteristic of Kashubian that it has not undergone liquid ametathesis in part (in the urslaw. * Or group , corresponding to baltoslaw. * Ar ): The Kashubian word gard stands for fortified in Russian gorod , Polish gród and Serbian grad Settlement or city opposite, which corresponds to the reconstructed ancient Slavic forerunner * gordъ (alternative notation: * gordŭ , after Holzer * gardu ).

Kashubian has been written in Latin since the 15th century, following the example of Polish orthography . However, a uniform written language could never develop, the writers still write in their respective dialects . The most important Kashubian writer in the 19th century was Florian Ceynowa , who greatly reduced the Polish transformation that had been typical of the written language until then. After the First World War, most of the Kashubian settlement area fell to the newly created Polish state, western parts fell to the German Empire and an eastern strip to the Free City of Danzig.

From a Polish perspective, Kashubian has long been considered a dialect of Polish . The arguments for this were on the one hand the linguistic proximity, but above all the fact that the Kashubians historically always counted themselves among the Slavs, especially in the national disputes of the late 19th and early 20th centuries. Finally, it also plays a role that Kashubian still functions more or less like a dialect in relation to Polish and that it is largely restricted to oral communication or a few types of text . The language of public life in the Kashubian areas is almost exclusively Polish.

Today, the efforts of a group of Kashubian intellectuals to develop Kashubian into their own standard language are no longer hindered, but tolerated by the Polish state and to a certain extent also encouraged. Kashubian is taught in a few schools, there are radio and TV broadcasts in Kashubian. Since 2005 it has been possible to take the Abitur in Kashubian at some Polish schools. In many village churches, the priests sometimes read masses in the Kashubian language. For further development, it will be decisive whether the common orthography that was agreed on at the beginning of the nineties really prevails.

Kashubian was introduced as the official language in the following five municipalities:

In the novel Die Blechtrommel , Günter Grass describes how the mother and uncle of the protagonist Oskar use Kashubian as a secret language.

Since spring 2004 there is also a Kashubian Wikipedia . 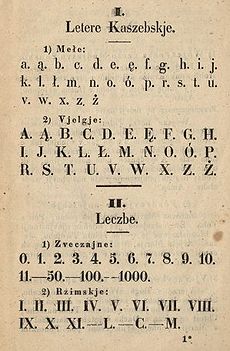