Lower Sorbian (colloquial and partly as a German self-designation also Wendish; outdated Lower Lusatian Serbian , Lower Sorbian dolnoserbšćina ) is a West Slavic language spoken by the Lower Sorbs / Wends in Lower Lusatia. It is next to the Upper Sorbian , one of the two Sorbian written languages . With around 7,000 speakers currently, the language is considered an acutely endangered language .

Lower Sorbian is still spoken in some villages in and around Cottbus / Chóśebuz today. In the areas near Vetschau / Wětošow, Lübbenau / Lubnjow and Spremberg / Grodk, everyday use is hardly to be found. Road signs and place-name signs in this region are bilingual .

In the years from 1993 to 1995, investigations were carried out in villages in Lower Lusatia because they wanted to know how many people still speak Wendish / Lower Sorbian and what the age structure of the speakers looks like, i.e. whether the language retention is good or bad.

Most of the speakers lived near Cottbus in the Spree-Neisse district :

It should be noted that all persons with less knowledge of Sorbian / Wendish were included in the investigations than Wendish speakers. It is noticeable that - with the exception of Neuendorf - all of the villages that have preserved Lower Sorbian in good form teach or teach the language in their schools.

Lower Sorbian was originally (around the 17th century) much more widespread, around

According to the census of December 1, 1900 , 55.8% of the Cottbus district ( Brandenburg province ) still spoke the Wendish language.

The phonology of Lower Sorbian has been heavily influenced by language contact with German , especially in Cottbus and the larger cities. For example, tends a German-influenced pronunciation to a voiced uvular fricative [⁠ ʁ ⁠] instead of the alveolar trills [⁠ r ⁠] and a not particularly palatalisiertes [⁠ l ⁠] instead of [l] to have. In villages and rural areas, the German influence is less strong and the pronunciation more “typically Slavic”.

The consonantic phonemes of Lower Sorbian are as follows:

In Lower Sorbian both final hardening and regressive assimilation of the phonation occur:

The vowel phonemes are as follows:

The word accent in Lower Sorbian usually falls on the first syllable of the word:

In loanwords , the accent can fall on one of the last three syllables of the word:

«W cuzej zemi» ( In a foreign country ) by Mato Kosyk

Since the 7th century the Lower Lusatia was settled by Slavic population ( Lusici ). The earliest evidence of the language can be found in the names of places, fields and waters. Some text passages in Lower Sorbian are known from the 12th century (Magdeburg glosses). Bibles, hymn books and prayers have been printed in Lower Sorbian (Wendish) since the 16th century.

Since the 17th century, the language was exposed to increasing official pressure from the Saxon and Prussian authorities. Books in Lower Sorbian were confiscated and destroyed, pastors were banned from preaching in Wendish, and schools were no longer allowed to teach in this language.

Since the Lower Sorbian / Wendish language was banned by the National Socialists in 1937, the language was hardly spoken in public.

After 1945, the maintenance of the Lower Sorbian language was supported by the state, including through Sorbian lessons in schools, but everyday use continued to decline. 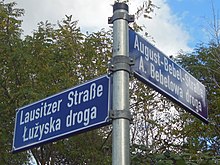 According to UNESCO, Lower Sorbian is one of the most endangered languages ​​in Europe. Today, Lower Sorbian is still spoken by 7,000 to 10,000 people, but mostly by the older generations, which means that Lower Sorbian is worse off than Upper Sorbian, which is also used actively by young people and children.

Various associations and organizations are committed to the preservation and maintenance of the Lower Sorbian culture and language. Cottbus also has the only Lower Sorbian grammar school .

Today Lower Sorbian - in contrast to Upper Sorbian - lacks a stable core language area in which it is the majority language.

Education in the Lower Sorbian-Wendish language

Up until 1933, school education in the Lower Sorbian-Wendish language was mostly limited to religious instruction and as an aid to teaching the German language .

At the time of National Socialism , the Lower Sorbian-Wendish language was with language ban is prohibited in all areas of life, whether on the street, in schools or in church masses .

First establishment of a school system

The promotion of Lower Sorbian, anchored by law in Brandenburg from 1949 , was viewed negatively by parts of the resident German population, including the resettled parts of the population, and led to public protests. Parents applied for their children to be exempted from Sorbian lessons or their abolition. B. with election boycott .

The Sorbian Institute for Teacher Training in Radibor / Radwor and Kleinwelka / Mały Wjelkow, which existed until 1991, was founded in Upper Lusatia as early as 1946 .

After the efforts of the previous language policy of the GDR were further intensified in 1952 , the Sorbian-Wendish language was to be guaranteed an even higher priority under the motto "Lusatia becomes bilingual". Schools were established by the Ministry of National Education - for the first time by a German state institution - in which the Lower Sorbian-Wendish language was taught. In the school year 1954/55 there were 22 type B schools (Sorbian as a foreign language). However, it was also considered to convert the schools in the villages of Döbbrick , Dissen and Drachhausen into A schools (Sorbian as the language of instruction; see also Sorbian school system ).

With the exclusion of Fred Oelßner from the Politburo, however, a change in nationality politics was already announced at the end of the 1950s, so the slogan "Lusatia is becoming socialist" was subordinated to which language politics were subordinated. The so-called 7th DB from 1964 made Sorbian from a compulsory subject in Lusatia to an optional subject. Associated with this was a three-quarter drop in the number of students in Sorbian classes. The student numbers of the 1950s were not reached again by the end of the GDR.

Despite the decline in the birth rate , the number of pupils attending Sorbian classes in Brandenburg remains constant. With the new project Witaj , which was first introduced in Cottbus in 1998, there is the possibility to bring the Lower Sorbian-Wendish language closer to the children in kindergarten by immersion as a “second mother tongue”. Today there is an option to teach and learn Lower Sorbian-Wendish at around 30 schools.

The monthly television magazine Łužyca has been on television since 1992 and is moderated alternately by the two presenters Anja Pohontsch and Christian Matthée . A mono-thematic program is broadcast every three months.

In the Domowina publishing house in Bautzen, several books appear annually in the Lower Sorbian-Wendish language.

The Lower Sorbian language has the best chances of survival in the northern area around Cottbus (Chóśebuz) and in the west of its language area. Almost no Wendish is spoken in the south today, even if z. For example, in Bahnsdorf (southern Lower Lusatia, Oberspreewald-Lausitz district ) around 70 years ago, almost all residents spoke Sorbian. The Polish Sorabist Tadeusz Lewaszkiewicz is of the opinion that Lower Sorbian has only 200 native speakers and that Lower Sorbian is in the so-called stage of death agony.