The title of this article is ambiguous. Further meanings are listed under Beeskow (disambiguation) .

Beeskow is located on the eastern edge of the Beeskower Platte on the Spree , about 80 km southeast of Berlin and about 30 km southwest of Frankfurt (Oder) ; the Oder is about 30 km to the east. Large forest and meadow areas with many smaller and larger lakes extend around the city. Beeskow is called the "gateway to Lower Lusatia ".

Beeskow consists of the core city of Beeskow and seven districts:

Market square, east side with Marienkirche

City wall with stork tower in the background 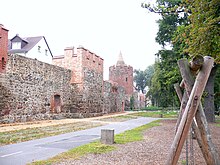 View from the castle tower to the Marienkirche

Beeskow was created at the point where the long-distance route from Frankfurt (Oder) to Leipzig crosses the Spree. The place name, which comes from Sorbian , is derived either from bez or baz for " elder ", or from a personal name Bezek or Bezik (from b (j) ez = "without").

The city founders and first city lords were the Knights of Strele in the 13th century . Under the protection of the castle, which was first mentioned in 1316, the city was laid out according to plan. The castle and city wall have largely been preserved. Since 1375 there was evidence of a leprosarium in Beeskow "in front of the Fürstenwalder Tor" , which was dedicated to St. Nicholas. The associated chapel was rebuilt in 1486.

In the 15th and 16th centuries, Beeskow gained importance as a customs post and as the center of the Beeskow rule , which belonged to Lower Lusatia in the Middle Ages . The city was also ecclesiastically oriented to the south. She belonged to the diocese of Meissen ; the city parish was under the patronage of the Neuzelle monastery . In the late Middle Ages, the city and the rulers changed hands several times. Towards the end of the 14th century, the Beeskow rule was owned by Duke Swantibor of Pomerania. After that she belonged among other things to members of the von Bieberstein family (last 1512–1551). Since 1518 Beeskow was owned by the Lubusz bishops .

After the Lords of Bieberstein died out in December 1551, the Bohemian King Ferdinand I enfeoffed the Margraves of Brandenburg with the Lords of Beeskow and Storkow five years later . Officially, Beeskow remained a Bohemian fiefdom and part of Niederlausitz, but in the following decades the Hohenzollerns succeeded in loosening their newly won rule more and more from Niederlausitz. Around 1600 Beeskow had finally become part of Brandenburg in its entirety, even though the Lower Lusatian estates did not want to recognize this fact for a long time. Nominally, the Bohemian lordship remained in place until 1742, when Frederick II broke the lordship from Maria Theresa's feudal lordship .

In two city fires in the 16th and 17th centuries, Beeskow was almost completely destroyed, after the reconstruction it became a garrison town . Beeskow experienced an economic heyday in the 19th century, especially with cloth, linen and beer.

With the opening of the railway line to Grunow , Beeskow received a train station and connection to the German railway network on May 15, 1888 . This was followed by the lines to Königs Wusterhausen (1898), Lübben via the Niederlausitzer Eisenbahn (1901, closed in 1996) and Bad Saarow via the Fürstenwalde – Beeskow district railway (1911, until 1998).

On April 23, 1945, a Soviet air raid partially destroyed the old town. The heavy artillery fire of the following days fell u. a. the Gothic brick church of St. Mary's Sacrifice. The destroyed areas of the city were partly rebuilt in rows in the 1950s and 1960s. After the fall of the Wall , the historical buildings in the old town, including the Marienkirche, were restored . The city is a member of the working group "Cities with historic city centers" of the state of Brandenburg.

In Beeskow there was a small Jewish community ( Kehillah ) with a synagogue , which today serves as a residential building. A Jewish cemetery from the first half of the 19th century was not destroyed during the Nazi era; existing gravestones were combined to form a monument in the 1980s. Two stumbling blocks were laid in 2014, but they were stolen the following day.

The city council of Beeskow consists of 18 city councilors and the full-time mayor. Since the local elections on May 26, 2019, it has been composed as follows:

In the mayoral election on September 24, 2017, Steffen was confirmed in office with 62.7% of the valid votes for a further term of eight years. 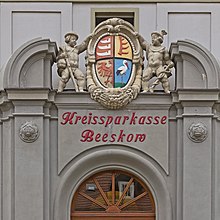 Blazon : “In red a pointed Gothic portal decorated with four pinnacles and provided with two openings placed one above the other, covered with two shields placed diagonally against one another. In front three silver scythe blades, one on top of the other, in red (with the edge turned upwards); behind in gold a red, five-ended stag pole, bent to the right. "

The shield with three scythes is the coat of arms of the first city lords, the Knights of Strele. The red stag pole in the golden background is the coat of arms of the Lords of Biberstein . The four turrets have emerged over time from four rods that towered over the head of the shield of the oldest known Beeskow city coat of arms. The rods should represent bishop's rods, since the Beeskow rule belonged to the diocese of Lebus in the 16th century . The gate facade is a general city symbol and has no relation to any local historical structure. This coat of arms is documented in the Brandenburg State Main Archives on sealed documents from the years 1534 and 1540.

Beeskow maintains partnerships with Kamen in North Rhine-Westphalia and with Sulęcin (until 1945: Zielenzig) in Poland . 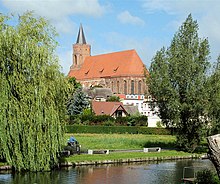 Manor house in the district of Krügersdorf

In August 2016 a music museum opened in Beeskow , in which mechanical and self-playing musical instruments are exhibited. After some of its exhibits were exhibited in a former department store , it was integrated into Beeskow Castle in May 2018.

A scholarship for writers is awarded annually. The “Burgschreiber” lives from June 11th of each year for a period of six months at Beeskow Castle to deal with the region and its people, to actively participate in social life and to have the opportunity to work in peace. The castle scribes offer readings and other events for guests at the castle.

The writer Günter de Bruyn lives near Beeskow and has the landscape offside in his book . Declaration of love to a landscape (Frankfurt 2006) set a literary monument.

On the night of June 16, 2004, two young people from Beeskow attacked a homeless man, tried to rob him and set him on fire. The homeless suffered life-threatening burns. The circumstances of this act were dealt with in the feature film Weltstadt , which premiered in 2008 and directed by Christian Klandt , who grew up in Beeskow, with Florian Bartholomäi in the lead role. Most of the film was shot in Beeskow, and numerous amateur actors from the city also took part.

The largest sports club in the city is SV Preußen 90 Beeskow with the departments football, volleyball, table tennis, tennis, gymnastics, badminton , taekwondo , dragon boat and boxing (as of 2017).

The Athletics Association in Beeskow organizes various sporting events, such as the New Year's Run, the Beeskow Old Town Run (held for the first time in 2012), the Beeskow track walking and the children's Olympics.

In the sports and leisure center on Bertholdplatz there are several soccer fields, a 400 m circular track with tartan surface, a throwing area, two gyms (one of which has space for around 200 spectators) as well as tennis and beach volleyball courts. There is also the possibility of bowling and bowling.