The National Democratic Party of Germany (NDPD) was a bloc party in the GDR . It was founded in the Soviet occupation zone in 1948 and supported the policies of the SED . In 1990 it went into the all-German FDP .

Memorial plaque at the founding place of the NDPD in Potsdam, Lindenstrasse 44 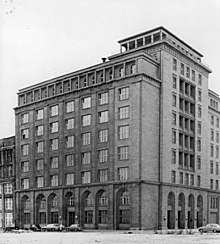 House of the NDPD in East Berlin, Friedrichstrasse 65 (1959)

The Soviet Military Administration in Germany (SMAD) allowed four parties in the summer of 1945: the KPD , the SPD , the CDU and the LDP . In April 1946 the SPD was forcibly united with the KPD to form the SED . Due to the good results of the CDU and LDP in the state elections in the Soviet Zone in 1946 , the SED tried to create artificial competition for these parties. To this end, she founded a farmers' party ( DBD ) on instructions and in coordination with the SMAD in April 1948 and the National Democratic Party of Germany on May 25, 1948. On that day the chairmen of the founding committees met; that was later set as the foundation date.

In March 1948, Stalin said that it was time to "break the line between former Nazis and non-Nazis". As early as February 26, 1948, SMAD Order No. 35 had ended denazification in the Soviet zone; This made it possible for NSDAP members who were not “incriminated” to “work honestly to secure the unity and democratic development of Germany”. On March 22, 1948, the new National-Zeitung appeared for the first time , later the central organ of the NDPD.

In addition to old NSDAP members, former officers and displaced persons were also to be taken in by the new party. At its meeting in May 1948, the SED executive committee stated that “these politically unclear people” should not give up “the voting cattle” for the bourgeois parties CDU and LDP in the next election.

The first chairman of the NDPD was Lothar Bolz , a KPD member since 1928 and later a member of the National Committee for Free Germany (NKFD, 1943–1945) in the Soviet Union . The party joined the Democratic Bloc in September 1948 . According to Klaus Schroeder , significantly more former NSDAP members were involved in the SED than in the NDPD.

Political work in the GDR

In its party program, the NDPD called for, among other things, the promotion of the middle class , the integration of former professional civil servants, an end to discrimination against simple NSDAP members and Wehrmacht officers , a complete land reform and the expropriation of the corporations. The national conservative members of the middle class and returnees from captivity made up the majority of the members. The NDPD was organized on the model of the SED and the principle of democratic centralism . The highest body was the party congress , which met every five years and which elected a main committee. A secretariat took care of the day-to-day business. In addition to the national newspaper , which appears on weekdays , the party executive also published the bimonthly magazine Die Nation (“magazine for the theory and practice of national politics”). The party-owned publishing house of the nation specialized "in so-called 'conversion literature'" for the party clientele of former Nazis, officers and professional soldiers.

According to its own information, the NDPD had the following membership figures:

On December 7, 1989, the party left the " Democratic Bloc ". The party participated in the round table with three representatives .

At the 14th party congress on 20/21 In January 1990 Wolfgang Glaeser was elected chairman with 32 percent against; In his closing remarks he took a strongly reform-oriented standpoint. Executives and parts of the membership distanced themselves from it, and Glaeser resigned two days later. At the party congress on February 11, 1990, Wolfgang Rauls was elected as the new chairman of the party.

The NDPD received only 0.39% of the vote and two mandates in the free Volkskammer election on March 18, 1990. During the election campaign she advocated a social market economy , a step-by-step plan for German unity through economic and monetary union and the GDR's accession to the European Community .

An electoral alliance of national and liberal parties in the GDR proposed by the NDPD was rejected by the parties that formed the Bund Free Democrats . Thereupon the NDPD also joined the League of Free Democrats and went with it on August 12, 1990 in the Free Democratic Party ( FDP ).

Chairwoman of the regional associations 1948–1952

Chair of the district associations

Block parties of the GDR