The color combination black-white-red used by the NKFD, also worn by relatives as an armband 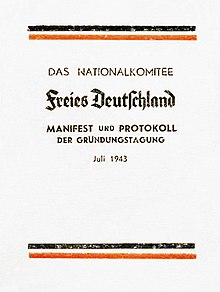 Manifesto of the founding assembly of the "National Committee Free Germany"

The National Committee Free Germany ( NKFD ) was an association of German prisoner-of-war soldiers and officers with communist German emigrants who wanted to fight National Socialism and want to conceive a different Germany. The association was formed in the Soviet Union in 1943 and existed until the end of 1945.

A GDR special stamp commemorates the founding of the NKFD (1965)

On April 3, 1942, at the suggestion of the Soviet Union , the Politburo of the KPD in Moscow adopted a policy paper calling for the creation of a broad popular front against Hitler, regardless of the political origin of those involved. The first anti-fascist officer group was formed in the Jelabuga POW camp under Captain Ernst Hadermann . On April 21, 1942, he had given the speech The Man's Word of a Captain in front of around 1000 prisoners of war . On May 31, 1942, the first anti-fascist officers' conference took place. 23 officers signed an appeal to all officers in captivity . On the communist side there was the proposal of the Politburo of the Central Committee of the KPD to form a German committee to fight against the Hitler War and Nazi tyranny .

A preparatory committee was formed in the Lunjowo camp in the Moscow suburb of Krasnogorsk . The communist writer Erich Weinert became chairman, other members included Johannes R. Becher , Bernt von Kügelgen , Walter Ulbricht and Wilhelm Pieck . At the beginning of June 1943, Alfred Kurella and Rudolf Herrnstadt were commissioned by the Soviet leadership to draw up a manifesto for the committee. Two people in particular stood for the Soviet leadership: Dmitri Manuilski , secretary of the Comintern , and Alexander Shcherbakov , head of the Red Army's main political administration. What was remarkable about this was that Stalin ordered that communist phrases be removed from this manifesto and that the KPD not be mentioned. According to Anton Ackermann's notes , he saw the committee as a shadow government, while Kurella saw the manifesto as the first state document of the new Germany.

On June 22, 1943, the founding committee was formed. Erich Weinert, Wilhelm Pieck, Walter Ulbricht and Hans Mahle represented the emigrants, while Captain Hadermann, Lieutenant von Kügelgen, Sergeant Stresow and Private Eschborn represented the prisoners. Initially, there was little willingness from the officers' camps, especially when the German counter-offensive began on July 5, 1943 at Kursk . Furthermore, Ulbricht's removal from the founding committee was sometimes even requested. In order to meet the wishes of the officers, the manifesto of the founding committee was slightly redesigned and instead of the black, red and gold flag of the Weimar Republic , as initially thought, the black , white and red flag of the German Empire was chosen as the emblem .

From July 12 to 13, 1943, the National Committee "Free Germany" was founded in Krasnogorsk near Moscow on the initiative of the USSR and its top military command under the supervision of the GRU secret service . Erich Weinert was elected President of the NKFD. The emigration leadership of the KPD was represented by Anton Ackermann , Wilhelm Florin , Wilhelm Pieck and Walter Ulbricht .

Signatory of the manifesto

Two months later, the Association of German Officers (BDO) was founded under General der Artillerie Walther von Seydlitz , shortly afterwards the BDO joined the National Committee. At the meeting of the NKFD on June 16, 1944, a “working group for ecclesiastical issues” was also formed, which included the Protestant pastor Friedrich-Wilhelm Krummacher and the Catholic theologian Aloys Ludwig .

Meeting of the NKFD, sitting on the right: Erich Weinert, President of the committee, on the left: General von Seydlitz

The seat of the National Committee was initially Krasnogorsk, before moving to a former rest home of the Soviet railway workers' union in Lunjowo , about 35 km from Moscow, in August 1943 . The supreme body was the plenum of the National Committee. This plenary assembly held a meeting at least once a month at which all important tasks were discussed and appropriate measures decided. In addition, statements were made on the reports of the Executive Committee (GA).

Initially, the GA consisted of two communists, Ulbricht and Weinert, and two prisoners of war, Hadermann and Zippel. After the merger with the BDO, the prisoners of war NKFD members Rücker and Reyher as well as the BDO members Korfes, Lattmann, Luitpold Steidle and Hans-Günther van Hooven were added. In addition, an operational department of the GA was set up, to which Ulbricht, Reyher, Steidle, van Hooven and Zippel belonged. There were also commissions for economics, social policy, law and culture that assisted the GA. The presidium of the committee, consisting of President Weinert and the deputies Karl Hetz and Heinrich Graf von Einsiedel , fulfilled rather representative purposes. However, only Weinert effectively determined the line of the presidium.

"One of the special tasks of the office is to support the (GLAV) PURRKA in the political education work among the German officers and soldiers at the front and among the German prisoners of war, in particular with the publication of the newspaper, leaflets, brochures and with the record and loudspeaker propaganda. In addition, the office should address the German people and German soldiers and officers on behalf of the committee with its own appeals, for which purpose the radio should also be systematically used. (...) The office keeps the current registry of the German anti-fascist activists in the POW camps and POW schools by mutual agreement and with the help of the administration of the NKVD POW camps. "

At the beginning of August 1943, Arthur Pieck , captain of the Red Army and employee of the information subdivision of the political headquarters of the Red Army, took over the construction. Mikhail Koslow then succeeded him as director of the institute, who he remained until 1945. In principle, the work of the Comintern , the Ministry of the Interior and GlavPURRKA (Political Headquarters of the Red Army) in dealing with the prisoners of war was coordinated at the Institute for the first time . Wolfgang Leonhard , then an institute employee, soon realized that the actual political editorial work was being done in the so-called city committee.

This was shown by the fact that, in addition to President Weinert, Ulbricht, Edwin Hoernle , Markus Wolf , Gustav Sobottka , Willi Bredel , Johannes R. Becher and Martha Arendsee, important NKFD members from the group of KPD emigrants worked directly at the institute. Other emigrants occupied key positions in the committee's radio and newspaper editors. This cadre tried to coordinate the propaganda behavior of the National Committee with the political goals of the Soviet Union.

Membership card of an NKFD member

The NKFD was supported by the Soviet Union. There was a weekly newspaper Free Germany , an illustrated magazine Free Germany in pictures and numerous central leaflets. It also ran a radio station " Free Germany ". Signature tune was the patriotic song of Ernst Moritz Arndt . Loudspeaker trucks were used on the fronts. About such loudspeaker cars were u. a. the speeches of the German general Walther von Seydlitz-Kurzbach , the former division pastor Friedrich-Wilhelm Krummacher and Walter Ulbricht, Anton Ackermann and Erich Weinert spread.

The main activity was convincing at the front with the aim of persuading members of the Wehrmacht to "defeat" or to voluntarily capture. The commitment bore fruit. On July 8, 1944, Lieutenant General Vincenz Müller voluntarily gave himself up, and by July 22, 1944 he was followed by 17 generals of the former Army Group Center , who were captured when the German front collapsed and who declared their membership of the NKFD. Members of the front organization of the NKFD also worked in the rear of the German front. Field Marshal Friedrich Paulus was a prominent member . On August 8, 1944, the former commander in chief of the Stalingrad Army declared his break with Hitler and joined the NKFD.

The role of the NKFD was not limited to persuasion. For example, the NKFD lured German associations into ambushes through incorrectly placed radio messages. After the collapse of the German fronts in the Soviet Union, the captive German generals were given greater prominence in the NKFD's appeals. One example of this is the appeal by the 50 generals on December 8, 1944, to the population and the Wehrmacht to break away from Hitler and end the war.

After the end of the war, both the NKFD and the BDO disbanded in Moscow on November 2, 1945. Most of the emigrants returned to Germany, the prisoner-of-war members were returned to regular prisoner-of-war camps. Occasionally they returned home in the following years, 5 generals and 100 officers in September 1948: They went to the Soviet occupation zone of Germany , where they set up the barracked people's police , the forerunner of the GDR's National People's Army . Another part returned home in 1950, the last were released in 1955.

Similar groups in other countries