An ambassador ( French ambassadeur , English ambassador ) is a diplomat and the civil servant supreme representative of a state in another country or at an international organization. He is posted by the Ministry of Foreign Affairs and is the personal representative of the head of state of his country. The diplomatic corps of a country is the longest-serving ambassador, the Doyen , guided, if not the Apostolic Nuncio was determined by the receiving State for Doyen.

Agenda and position of an ambassador

His job as head of an embassy is to represent the interests of his country vis-à-vis the host country, which requires close ties to the government , opposition and social organizations in the host country. To enable unrestricted representation of interests, ambassadors as diplomats are granted immunity . The representative residence of the ambassador and his family called residence and is like the law firm of the Embassy no extraterritorial equivalent area for the host country, but in terms of its inviolability to protect the site of the Chancellery (Art. 1 letter i WÜD ).

An ambassador finds himself in a difficult balancing act, because on the one hand he is made responsible for politics in his remote home country (although he has little influence on it from abroad), on the other hand he is supposed to maintain good relationships and provide important information about his host country . He can hardly influence from a distance whether and how these analyzes are actually used by the departments of his own foreign ministry. 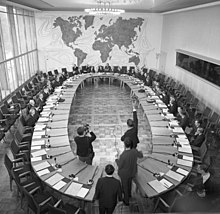 Ambassadors of the Federal Republic of Germany are officials of the higher foreign service appointed by the Federal President . In accordance with Section 3 (3) sentence 2 of the Foreign Service Act, the ambassador acts as the personal representative of the Federal President to the head of state of the receiving state. All ambassadors from grade A 16 are considered political civil servants in accordance with Section 54, Paragraph 1, No. 2 of the Federal Civil Service Act , so they can be put into temporary retirement at any time if they are civil servants for life. In contrast to other countries, former politicians are traditionally rarely appointed ambassadors in Germany. The few exceptions include the former Bundestag President Philipp Jenninger (CDU), the former State Minister in the Foreign Office Ursula Seiler-Albring (FDP), the former State Secretary Rudolf Dreßler (SPD) and the former Federal Minister of Education Annette Schavan (CDU).

The pay of the heads of the German diplomatic missions abroad depends on the size and importance of the host country. The heads of large embassies, for example in Washington, Paris, Beijing or Moscow or the German Permanent Mission to the United Nations are rated according to grade B9 (for comparison: State Secretary, BesGr B 11); but there are also small embassies, for example in Gabon or Botswana, where the ambassador of grade BesGr A15 is grouped. The ambassadors are also entitled to a basic salary-related foreign allowance , the level of which depends on the distance from Germany and the risk in the host country (e.g. neighboring countries of Germany: level 1, on the other hand Afghanistan: level 20).