An envoy ( Latin legatus , feminine form envoy ) is a diplomatic representative of one state to another state. While the envoy was often the head of mission of a diplomatic mission, the legation , until the end of the Second World War , today he is usually just a senior employee in an embassy . The envoy is mentioned in Article 14, Paragraph 1 of the Vienna Convention on Diplomatic Relations (WÜD).

Envoys in antiquity, in the Middle Ages and in the early modern period

Reception of the Ottoman embassy at the Doge of Venice in the Sala del Collegio of the Doge's Palace, probably before 1797 (end of the Republic of Venice)

Envoys as the official representatives of their rulers already existed in antiquity. As early as the 5th century BC, the exchange of envoys between the Greek city-states is said to have reached a considerable extent. Initially, they were only sent ad hoc , i.e. for a specific reason for a specific purpose. After completing his mission, the envoy returned to the sending state.

With the maintenance of permanent diplomatic relations since the beginning of the 15th century, it had become customary to send a representative with a permanent seat in the receiving state. The reason for this was the intensification of political relations, which made contact only on certain occasions no longer seem sufficient. The Republic of Venice established permanent embassies in Vienna , Paris , Madrid and Rome in the 16th century ; From Northern Italy the permanent diplomacy developed over the whole of Europe and finally worldwide. One of the earliest permanent envoys that can be proven was Nicodemus dei Pontremoli , who from 1446 was representative of the future Duke of Milan in Florence for about 20 years .

In the case of the Holy Roman Empire , after the conversion of the Reichstag into the Perpetual Reichstag , the imperial princes were hardly represented at the Reichstag in Regensburg, but were represented by so-called comitial envoys . So the Reichstag was largely a delegates' congress. The emperor himself was represented by imperial principal commissioners , who from 1748 belonged to the Thurn und Taxis family . Regensburg thus became the seat of around 70 comitial embassies of states of the Reich, but also of foreign states that either had individual ownership in the Reich and thus had a seat and vote on the Reichstag (Sweden, Denmark) or were admitted as observers, such as (Holland, France , England and Russia). Some of these envoys lived with their families in Regensburg for many years and, in the event of death, were even buried in the city at the envoys cemetery, which was established in 1663 . 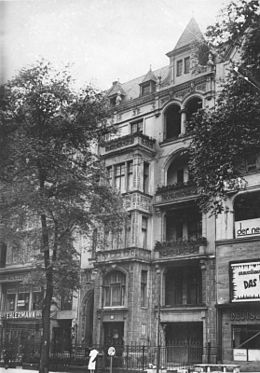 The Chinese embassy in Berlin in 1935. The dedication of the building was remembered for many years after the end of the Second World War, as it remained unused due to the division of Germany and visibly fell into disrepair in the middle of the flourishing Kurfürstendamm between posh shops and expensive restaurants.

The ambassador's literal sense has changed over time. In the past, states below a certain level were not allowed to send an ambassador. They appointed an envoy who was then the highest diplomatic representative of that country in the receiving state. In these cases, the mission building was not called an embassy , but an embassy .

Up until the 19th century it was a prerogative of the great powers ruled by monarchs to exchange ambassadors. At the beginning of Queen Victoria's reign in 1837, Great Britain only had ambassadors in Vienna , St. Petersburg and Constantinople . In 1862 the representative in Berlin , 1876 in Rome and 1877 in Madrid received ambassadorial status .

This practice was later extended to the major republics. Before the dispatch of a British ambassador to Washington in 1893 , the USA had not appointed any envoys to the rank of ambassador and was not a receiving state for them.

Significant protocol honors were associated with sending an ambassador instead of an envoy. In the 18th century it was customary at the court of Versailles for ambassadors to sit and keep their hats on when talking to the king. Envoys, on the other hand, were obliged to address the king standing and with his head uncovered.

After the Second World War, the differentiation between embassies and embassies was given up in consideration of Art. 2 No. 1 of the Charter of the United Nations and the sovereign equality of all members of the international community contained therein . Today the right to exchange ambassadors is claimed by all countries in the world. Embassies have become rare. They no longer exist in Germany , Austria , Switzerland and Liechtenstein . The right of states to determine the rank of head of mission by agreement (either ambassador or envoy or chargé d'affaires , cf. Art. 14 VÜD), as mentioned in Art. 15 VCDR , is therefore only of theoretical significance today.

What has remained, however, is the role of the ambassador as a senior missionary subordinate to the ambassador. In the German foreign service , the ambassador is often an official following the ambassador at larger embassies, and is usually the second man at the embassy. Several ambassadors can be appointed at very large embassies. In addition to the Messenger (. Engl Minister , fr. Ministre ) has established itself in the state practice another rank that demand the ambassador rank, but the Counselor projects: the Messenger of Counselor . (English Minister-Counselor , French. Ministre- Conseiller ).

The envoy mentioned in Art. 14 VCDR as head of mission, who, like the ambassador, is certified to the head of state (Art. 14 para. 1 letters a) and b) VCDR), while the chargé d'affaires, who is appointed head of mission, is accredited to the Ministry of Foreign Affairs is (Art. 14, Paragraph 1, Letter c) VCDR), is rarely found today.

Since all states basically want an exchange of ambassadors, the nonetheless dispatch of only one envoy (or a business agent) with the function of head of mission is usually a foreign policy demonstration. The sending state may be upset or it may not want to fill the vacant ambassadorial post for other reasons. The envoy as the planned head of mission is in the minutes of the group of ambassadors and the group of charge-holders (as planned heads of mission). The other ambassadors without a leadership function are subordinate to them.