The Kingdom of Sicily ( Latin Regnum Siciliae , Sicilian Regnu di Sicilia , Italian Regno di Sicilia ) refers to historical states in southern Italy that existed from 1130 to 1861 and then became part of the Kingdom of Italy .

Originated under the Normans 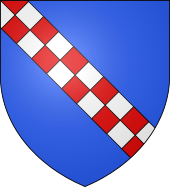 Palazzo Reale in Palermo, built by Roger II (1st half of the 12th century)

The Kingdom of Sicily dates back to the Norman conquest of southern Italy , which initially resulted in several smaller dominions that were exercised by various members of the Hauteville family . In 1127 and 1128 the Duchy of Apulia and the Principality of Taranto fell by inheritance to Roger II , Count of Sicily. Antipope Anaklet II raised the rulership of Rogers to a kingdom in September 1130, Roger was crowned in Palermo on Christmas 1130. As a result, Roger was able to stabilize his rule against various prince rebellions and in 1137 expand it to include the Duchy of Naples . In 1139, after military successes, he achieved the recognition of his kingdom by Pope Innocent II in the Treaty of Mignano.
However, until the Treaty of Benevento in 1156 , the popes worked together with the Roman-German rulers (who regarded southern Italy as part of the empire ) to remove Norman rule over southern Italy.

Under the Hohenstaufen and the Anjou house

1189 died out with Wilhelm II. The royal house of Hauteville in the legitimate male line. The Roman King Henry VI raised hereditary claims . , who was married to Constanze of Sicily , Wilhelm's aunt and closest relative. First, however, with Tankred of Lecce, an illegitimate descendant of the Hautevilles, with the support of the Sicilian nobility and at least tolerated by the Pope, was able to assert himself as king. It was only after his death in 1194 that Heinrich, meanwhile also Roman Emperor, succeeded in conquering the Kingdom of Sicily. He put Tankred's son, Wilhelm III. and was crowned king in Palermo at Christmas 1194, with which the Hohenstaufen rule over Sicily began.

From around 1250, the rule of the Hohenstaufen in Sicily began to crumble. After the deposition of King Frederick I (as Frederick II also Roman King and Emperor) by Pope Innocent IV at the Council of Lyons , Frederick initially continued to rule Sicily largely unchallenged. After his death in 1250 and the death of his son Konrad I in 1254, his son Konrad II (called Konradin) was only a minor, two-year-old successor for whom Manfred , Friedrich's illegitimate but subsequently legitimized son, took over the reign. The Pope did not recognize this line of succession and enfeoffed the English Prince Edmund with the kingdom in 1255 , but he was unable to enforce his claims. In 1258 Manfred himself was crowned King of Sicily and was initially able to stabilize rule in Sicily. In 1265, after Edmund's resignation, Pope Clement IV enfeoffed Charles of Anjou with the Kingdom of Sicily, who was able to defeat Manfred in the battle of Benevento in 1266 , where Manfred died. In 1268 Konradin was defeated in an attempt to recapture Sicily for the Hohenstaufen and was executed in Naples.

Separation of the kingdoms of Sicily and Naples

The rule of Charles of Anjou remained precarious. In 1282 there was an uprising against Karl ( Sicilian Vespers ) on the island of Sicily . Peter III was born on the island . proclaimed king by Aragon , who as the husband of Constanze , Manfred's eldest child, was able to assert claims to the Sicilian crown. As a result, both Charles of Anjou and his successors failed to recapture the island of Sicily and Peter and his successors failed to conquer the continental part of the empire. In the peace of Caltabellotta in 1302 the Kingdom was officially divided, both parts the name Kingdom of Sicily further led (Island Sicily was often with the old Greek name of the island as Trinacria designated for mainland Sicily, the term is often today the Kingdom of Naples used ).

Under the house of Aragon 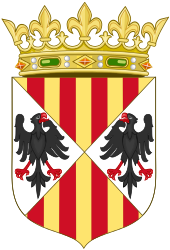 Coat of arms of the Kingdom of Sicily (House of Aragon), combination of the Aragon and Staufer arms

Renaissance wing of the Palazzo Reale in Palermo

Sicily, located on the island, became a branch line of the House of Aragón when Jacob II of Aragón renounced the Sicilian throne in 1295 in favor of Charles II of Anjou , who ruled the mainland ( Peace of Anagni ) and then resigned on the island whose younger brother Friedrich was proclaimed king. In 1409 it returned to the kings of Aragon as inheritance. It has generally been ruled by viceroys ever since.

In 1442, Alfonso V of Aragón was able to gain control of mainland Sicily after he asserted inheritance claims as the adopted son of Queen Joan II , who in turn had appointed René of Anjou as her heir. In Alfon's succession, the personal union was canceled again, the island remained with King John under the Crown of Aragón, the mainland went to Alfon's illegitimate son Ferdinand . In 1501 mainland Sicily passed to the French royal family for a short time after Frederick I in favor of Louis XII. of France renounced his rights. At the same time, Ferdinand II of Aragón conquered the kingdom, which he finally succeeded in 1504. From this point on, the two empires were ruled continuously by the Spanish crown until 1713, but were not reunited into one kingdom. The administration was carried out by their own viceroys.

In 1713 the two Sicilies fell to Viktor Amadeus II of Savoy (island) and Emperor Charles VI in the course of the War of the Spanish Succession . (Mainland), whereby Viktor Amadeus had to exchange his rule with the Habsburgs for Sardinia in 1720 .

Charles lost the two kingdoms again to Spain in the War of the Polish Succession in 1735. The personal union with the Spanish crown was not restored, the Sicilian crowns took over with Charles V./VII. a younger son of King Philip V of Spain . Sicily and Naples remained separate kingdoms, but were ruled in personal union. When Charles became King of Spain after the death of his half-brothers, he transferred the Sicilian crowns to his youngest son Ferdinand III / IV. who founded the House of Bourbon-Sicily .

In 1799, the Parthenopean Republic was briefly proclaimed in mainland Sicily . In 1806 Ferdinand III./IV. to renounce the rule over mainland Sicily, which as the Kingdom of Naples went first to Joseph Bonaparte and then to Joachim Murat . Ferdinand was able to defend rule over the island against the claims of Napoleon and Murat.

Kingdom of the Two Sicilies 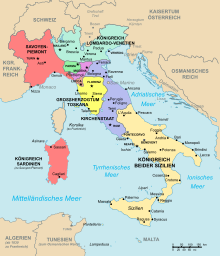 After the defeat of Napoleon, Ferdinand again became ruler of both Sicilies in 1815, which in 1816 were actually united to form the Kingdom of the Two Sicilies . In 1860 Sicily was conquered by Italian troops led by Giuseppe Garibaldi ( Train of the Thousand ). The history of the Kingdom of Sicily ended with the surrender of the last King Francis II in 1861 and the incorporation into the Kingdom of Italy.