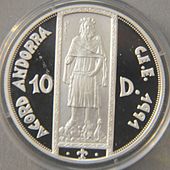 Peter was the eldest son of Jacob I from his marriage to Yolanda of Hungary . On June 13, 1262 he married Constantia (1249–1302) in Montpellier , daughter of Manfred von Hohenstaufen and granddaughter of Frederick II.

He succeeded his father on the Aragonese throne in 1276. Immediately after taking office, he had to fend off an uprising by the Moorish population of Valencia and a campaign by the Counts of Foix . In 1278 he forced his brother Jacob II of Mallorca to take a feudal oath. In 1281 he led a campaign to Tunis , the fleet of 15,000 warriors landed in 1282.

As heir of the Hohenstaufen in Sicily, he supported the uprising of the Sicilians in the Sicilian Vespers of 1282. Peter III. Landed at Trapani on August 30th after he received a message from Palermo for help in the fight against the unloved King Charles of Anjou on the campaign near Tunis. He accepted the crown offered to him by Sicilian nobles and was proclaimed King Peter I of Sicily in Palermo on September 4th.

In order to meet the costs of the war , he soon had to increase the rights of the Aragonese estates, but with Castilian and Greek help he was able to prevail against France and Naples. Since the papacy was on the side of the French ruling house Anjou and Peter III. belonged to the anti-papal Ghibelline Staufer party, he was banned by Pope Martin IV on November 18, 1282 , which was still valid for about a century for Sicily and its rulers. The following year he deposed Peter and enfeoffed Karl von Valois , the son of the French king Philip III. , with the Kingdom of Aragon. With papal support, Philip led a crusade against Peter in 1284/85 , but it ended unsuccessfully.

In order to settle disputes between Jews from different Spanish communities , he turned to Solomon Adret , the rabbi of Barcelona at the time .

Peter III is buried in a royal tomb in the Cistercian monastery Reial Monestir de Santa Maria de Santes Creus in the province of Tarragona . In November 2009, scientists from the Catalan Museum of History (Museu d'Història de Catalunya) proved that his grave had not been looted using an endoscopic camera.

From his marriage to Konstanze von Hohenstaufen he had the following children:

In addition, Peter was the father of numerous children born out of wedlock.