Storkow is a redirect to this article. Further meanings are listed under Storkow (disambiguation) .

General view from the west 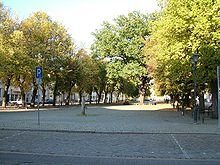 The city of Storkow (Mark) is divided according to its main statute into the core city and the following districts.

Obviously, the name is often associated with the stork (which can often be found in the area with many lakes), and the city's coat of arms shows this animal accordingly. However, as is often the case with old Brandenburg towns, the name actually has a Slavic origin. It goes back to the word Sturkuowe , which means a path through the swamp .

Storkow is the sixth oldest of the 112 cities in Brandenburg (as of May 1, 2007). Two documents, one from May 2nd, 1209 from Margrave Konrad von Landsberg from the House of Wettin and a second from December 26th, 1209 from Emperor Otto IV , prove that they have full city ​​rights . This makes Storkow the first documented town between Dahme and Oder , older than Berlin , Frankfurt (Oder) and Fürstenwalde .

Storkow was on the northern border of Lusatia (or Ostmark , as the region was then called) and on an old trade route that led from Barnim to Lübben and Leipzig . Around 1200 it was the most important settlement in the area. For the Wettin sovereigns, Storkow was of strategic importance in integrating the area into the empire and securing the borders. The location on a narrow passage between the swamp and the lake (area of ​​today's bascule bridge ) and the Storkow Castle, built on a heaped hill after 1136, were among the fortifications of the city. Around 1202, Margrave Konrad appointed the important noble family of Strele as his agents, who were owners of the Beeskow and Storkow estates until 1382 .

The Wettin rule of Storkow was the largest and most important in Lusatia around 1200. It reached from Baruth in the west to Sternberg east of the Oder and Reichwalde near Luckau in the south. Parts of Senftenberg and Fürstenberg were also temporarily owned by Strelesch. Six cities, five castles, around 60 villages of different sizes, numerous rivers, lakes, forests and fields belonged to the rule. After the Strele died out, the Lords of Biberstein owned the town and castle of Storkow from 1384 to 1518. Heavily indebted, they pledged the Storkow / Beeskow rule to the rich bishops of Lebus, who had their bishopric in Fürstenwalde. The last Catholic bishop Johannes VIII von Horneburg dedicated himself to alchemy and died in 1555 in Storkow Castle. As a result of the Reformation , the Storkow / Beeskow lordships passed into the possession of the Margrave Johann von Küstrin from the Hohenzollern family in 1556 .

Sorbian was spoken in Storkow until the beginning of the 17th century , whereby the Pirnaische Mönch noted in his description of the city as early as 1530: "Storkow has windisch and dewczß people" ("Storkow has Wendish and German people") , the population of this Time was already bilingual. 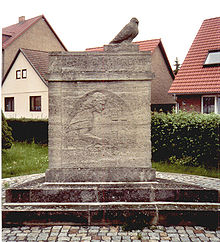 Monument to the fallen on the square on Berliner Strasse

Now part of Brandenburg-Prussia , King Friedrich II laid a foundation for the region's economic development in the 18th century through what is known as “internal colonization”. Among other things, bleachers, dyers and weavers were settled in the Storkow office in 1748 and the cultivation of potatoes in 24 official villages was introduced in the summer of the same year. The grounds of the Storkower channel set 1745/1746 the connection via the Dahme to Berlin waters here, the long of rafting and from the end of the 19th century the transport of building materials and tourism served.

The economic development of Storkow received a noticeable boost from the construction of the Beeskow-Königs Wusterhausen railway line in 1898. In the 20th century, companies for industrial shoe production, the construction of geophysical devices, furniture production and industrial poultry farming were established. In the time of the GDR , in which Storkow belonged to the Beeskow district in the Frankfurt (Oder) district from 1952 to 1990 , there was a garrison of the NVA in the city . In the district Wolfswinkel the operational Reichsbahndirektion Berlin , the children of its staff operating children's camp " Ernst Thalmann ".

On June 23, 1992, the Minister of the Interior of the State of Brandenburg gave his consent to the formation of the Storkow / Mark office. June 26, 1992 was set as the date of establishment of the office. The office was based in the town of Storkow (Mark) and initially consisted of 14 communities in what was then the district of Beeskow :

The city council of Storkow consists of 18 members and the full-time mayor. Since the local elections on May 26, 2019, it has been composed as follows:

Schulze-Ludwig was elected in the mayoral election on September 1, 2019 with 58.0% of the valid votes for a further term of eight years.

Historical coat of arms of Storkow

Blazon : "In blue with a golden hemline covered with 14 black balls, a natural stork on a green ground, raised by three golden stars."

In contrast to the old coat of arms, the golden coat of arms border with 14 black balls was added, which symbolizes the 14 districts. The three gold stars were arranged in a triangular shape in the new coat of arms.

The city's flag is three-stripe red-white-green in a ratio of 1: 3: 1 with the city coat of arms in the middle.

Storkow is a member of the European Association of Stork Cities (ESCO), which was founded in 2001 and aims to establish a permanent, active relationship between cities in Eastern and Western Europe for the mutual exchange of experiences in culture, education, business and other areas. The member cities all have a stork in their city ​​arms . Members are:

Bascule bridge over the Storkower Canal

The historical center northwest of the Storkower See is formed by the old town and the market with adjoining small streets. The area is protected by statute as a monument area of ​​the historic city center . The districts of Karlslust, Hubertushöhe and Wolfswinkel extend on both banks of the lake.

A much larger natural monument is the 1,900 ha chain of Groß Schauener lakes . It is one of the most important shallow water lake chains in Europe with broad bank and nest zones. Endangered plant and animal species such as orchids, otters, cormorants, ospreys and sea eagles have their habitat here. In 2002 this area was acquired by the Heinz Sielmann Foundation , which wants to preserve the unique natural area and make it tangible for the visitor. In June 2015, a former military site, the 450-hectare Bundeswehr training area in Storkow, was added to the areas of national natural heritage . The sand dunes, moors and wet meadows of the area are among other things a habitat for ospreys , sea ​​eagles , cranes and otters .

Behind the Karslust sports field is the “Malerkiefer”, which is estimated to be between 200 and 350 years old.

Open-air events such as concerts, theater and musicals take place in the courtyard of Storkow Castle. These include the annual medieval Easter spectacle and the courtyard festival that takes place on the 3rd weekend in September. Further highlights are the “Alinae Lumr” music festival, which has been taking place since 2015, as well as the “Storkower Herbstpoesie” since 2016 as a festival for literature and theater with musical sounds.

The annual "Rad-Scharmützel" takes place as a big leisure bike spectacle in Brandenburg on the first Sunday in September around the Scharmützelsee and the Storkower See.

The town of Storkow is an ideal starting point for cyclists, hikers and water sports enthusiasts due to its water and wooded surroundings. The almost 300 km network of cycle paths offers numerous tours in the area. The Kummersdorf lock in the Storkower Canal enables water tourists coming from Berlin to enter the Storkower See and the Scharmützelsee . The Dahme-Heideseen nature park with forest, lakes and pine heather is an easy hiking area. A varied, partly flat and hilly landscape extends to the Lower Spreewald . While the core town of Storkow and the Große Storkower See are outside the Dahme-Heideseen nature park, all of the Storkow districts (villages) are in the nature park .

The federal highway 246 between Zossen and Beeskow crosses Storkow in an east-west direction. The closest motorway junction is Storkow on the A 12 .

The Kummersdorf stop , the Storkow (Mark) station and the Hubertushöhe stop are on the Königs Wusterhausen – Grunow railway line , on which the regional train line RB 36 of the Niederbarnimer Railway runs from Königs Wusterhausen to Frankfurt (Oder) .