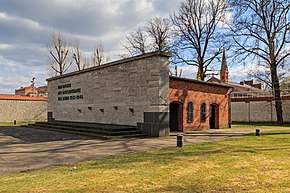 Inner courtyard of the Plötzensee memorial: on the left the section of the wall with memorial inscription, on the right the former execution shed

The Plötzensee Memorial ( listen ? / I ) commemorates the victims of National Socialism in the Berlin-Plötzensee prison. It is located on the edge of today's plötzensee prison in Berlin local situation Plotzensee the district of Charlottenburg-Nord ( Charlottenburg-Wilmersdorf ), was inaugurated in 1952 by the State of Berlin.

Portal of the memorial

Execution site with a memorial wreath from the State of Berlin

Urn with soil from concentration camps on the site

The Plötzensee prison was built from 1868 to 1879 on a plot of land in the Plötzensee estate that was owned by the royal forest treasury. With the formation of the community of Greater Berlin in 1920, the area was assigned to the then Berlin district of Charlottenburg .

During the time of National Socialism , the prison was not only used for imprisonment, but also served (together with the Brandenburg-Görden prison ) as the “ central place of execution for execution district IV ”. Especially those sentenced to death by the Berlin Chamber Court and those sentenced to death by the People's Court established in 1934 were executed here; The executioner in charge was Wilhelm Röttger from 1942 to 1945 .

Plötzensee was also used as a pre-trial detention facility for the People's Court and other special political courts . During the Second World War , numerous foreign forced laborers were also imprisoned in Plötzensee ; almost half of those executed in Plötzensee did not come from Germany.

Between 1933 and 1945, 2,891 death sentences were carried out in Plötzensee prison, including members of the Red Orchestra , participants in the failed coup attempt of July 20, 1944 and members of the Kreisau district . These included over 300 women who were transferred from the Barnimstrasse women's prison to Plötzensee for execution , and around 100 conscientious objectors from among Jehovah's Witnesses .

Executions were initially carried out with a hand ax in the prison yard. On October 14, 1936, Adolf Hitler ordered that the death penalty should be carried out with the guillotine . In 1937, a guillotine was moved from the Bruchsal prison to Plötzensee and set up in a former work barracks. At the end of 1942, a steel girder was pulled into this execution shed, on which eight victims could be executed simultaneously by hanging . During the war there were 310 air raids on Berlin . The guillotine was probably damaged in an Allied air raid on the night of September 4, 1943 and was therefore no longer used for some time.

Plötzenseer Blutnächte Part of the prison was badly damaged in
the bombing ; four people sentenced to death were able to flee. On this occasion, State Secretary Curt Rothenberger in the Reich Ministry of Justice ordered the immediate execution of all death sentences in order to "make room". During the nights from September 7th to 12th, 1943, over 250 prisoners from different countries were hanged in the so-called Plötzensee Blood Nights . Incorrect telephone transmission resulted in six inmates who were not sentenced to death. The Protestant prison chaplain Harald Poelchau reported about it:

“When it got dark on September 7th, the mass murder began . The night was cold. Now and then the darkness was lit by bombs. The beams of the headlights danced across the sky. The men had lined up in several ranks one behind the other. They stood there, unsure at first what to do with them. Then they understood. Eight men were called and led away by name. Those who remained remained almost motionless. Only now and then a whisper with me and with my Catholic brother Peter Buchholz [...]
Once the executioners interrupted their work because bombs crashed down nearby. The five by eight men who had already lined up had to be locked up in their cells again for a while. Then the killing continued. All of these men were hanged. [...] The executions had to be carried out by candlelight because the electric lights had been suspended. Only in the early morning, at eight o'clock, did the exhausted executioners stop their work in order to be able to take them up in the evening with renewed strength. "

Rothenberger was sentenced to seven years in prison in the Nuremberg legal process on December 4, 1947, but was released in August 1950.

The execution shed was partially demolished in 1951; in its place there is now a stone wall. The execution beam with five butcher's hooks instead of the previous eight is still there, the screed under the girder runs with a slight incline towards the center of the room. There is a floor drain in which the body wastes of the victims were rinsed, they in agony had lost.

The road leading to the memorial, the Hüttigpfad, was named after Richard Hüttig (1908–1934), a victim of the Charlottenburg resistance executed on June 14, 1934 in Plötzensee. In the residential areas that were newly built in Charlottenburg-Nord after the Second World War , numerous streets bear the names of executed members of the resistance against National Socialism .

In 2011 the Tagesspiegel addressed the question of whether the concept of the memorial is justified to commemorate all those executed in Plötzensee equally. This leads to the fact that not only resistance fighters but also serious criminals are honored, including a murderer who was executed on March 29, 1944 for “murdering Jews by robbery”. Johannes Tuchel , the director of the memorial, however, made it clear that it was the memorial's mission to "collect the names of all victims of the Nazi justice who were executed in Plötzensee, regardless of the deed they committed."

See also: List of execution victims in Berlin-Plötzensee during the National Socialist era

The people who were executed in Plötzensee include:

The Plötzensee Memorial is supported by the German Resistance Memorial Foundation . At its headquarters in the Bendlerblock on Stauffenbergstrasse ( Berlin-Tiergarten ), it maintains a memorial to the history of the assassination attempt of July 20, 1944 and, since 1989, a memorial that represents the full breadth and diversity of the German resistance as well as a special library on Nazi history.

In memory of the victims of National Socialist tyranny imprisoned and murdered in Plötzensee, including many members of church resistance movements, the two official churches erected two memorials north of the Paul Hertz settlement :