Ulrich Graf Schwerin is a redirect to this article. For the diplomat and father of the resistance fighter, see Ulrich Graf von Schwerin . 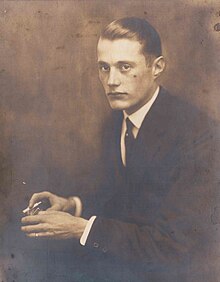 Schwerin was born the son of the diplomat Ulrich Graf von Schwerin . Up to the age of twelve he lived with his parents and sisters almost exclusively abroad. Only then did his father receive an intra-German assignment as a Prussian envoy in Dresden . The parents' house was politically very interested due to the father's occupation and the close relationship of the mother Freda von Bethmann Hollweg with the fifth Chancellor Theobald von Bethmann Hollweg (he was her cousin). The milieu was conservative, the upbringing was Christian and strict.

The von Schwerin family has been named after the city ​​of Schwerin since the 12th century , where they served as ministerials at Schwerin Castle in the Middle Ages . A direct ancestor, Otto Reichsfreiherr von Schwerin , Upper President of the Mark Brandenburg under the Great Elector , bought the Wolfshagen goods complex in the Uckermark in 1670 . Schwerin's great-grandfather added the adjoining Gut Göhren (now part of Woldegk ) in Mecklenburg-Strelitz to this property . Schwerin's father was born there.

House tutors taught Schwerin until he moved to Dresden . There he attended a public school for the first time. Because of the five sisters, the tone in the parental home was very "civil", the only son was spoiled. Perhaps as a counterbalance and to avoid the turmoil of the revolution in Dresden, he was sent to a boarding school, the Roßleben monastery school in Thuringia , at Easter 1919 . For Schwerin these were groundbreaking years and the beginning of important, lifelong friendships. Schwerin would have loved to become a diplomat like his father. However, a childless brother of his father made him the sole heir of the family businesses and adopted him in 1924. Schwerin therefore completed a practical apprenticeship in agriculture and forestry from 1921–1923 and then studied agriculture in Munich , Berlin and Breslau . He became a member of the Munich Society's student union . Shortly after his diploma and before the start of a planned doctorate, the uncle died in 1926. Schwerin had to take over the inheritance immediately.

The legacy was the agricultural and forestry operations Göhren in Mecklenburg-Strelitz and Sartowitz , which was located in the former West Prussia and since 1919 in the Polish Pomeranian . Sartowitz had come into the family through Schwerin's grandmother, a née von Schwanenfeld. In 1930 Schwerin added the addition "von Schwanenfeld" to its name. The property was economically endangered by debts and inheritance taxes. Sartowitz was also burdened with liquidation demands from the resurrected Polish state on the basis of the Peace Treaty of Versailles and the Polish agrarian reform. Economically, the situation was exacerbated by the global economic crisis from 1929, which meant the ruin for many East German goods. Schwerin managed to fend off Sartowitz's liquidation. Through careful and conscientious management, Schwerin was able to consolidate and largely maintain property in Germany and Poland. In 1928, in the midst of the Sartowitz crisis, Schwerin married Marianne Sahm, daughter of the Danzig Senate President Heinrich Sahm . Five sons were born to the couple. Two of the sons died in childhood; the others are the publisher Christoph Andreas Graf von Schwerin , the historian and police chief a. D. Detlef Graf von Schwerin as well as the farmer and forest manager and former president of Johanniter-Unfall-Hilfe Wilhelm Graf Schwerin .

Schwerin gained practical political experience in the conflict between the German minority and the Polish state. The vast majority of Germans in the former Prussian provinces of West Prussia and Posen , who came to Poland through Versailles , “opted” for Germany . Mainly the Germans, who were bound by property, remained in the corridor. The minority organized to defend their rights enshrined in the League of Nations . The Federal Foreign Office in Berlin and the League of Nations in Geneva were the main points of contact. For many years Schwerin was the mouthpiece of the minority leadership in Poland, which could not travel unhindered, at the ministries in Berlin. Within the German minority, there were clashes between the established leadership and the Nazi-defeated Young German Party . As a student, Schwerin had his first negative experiences with the National Socialists in 1923 as an eyewitness to the Hitler putsch . From 1930 he accompanied the rise of the NSDAP increasingly critically, even if he was a member of the NSDAP for pragmatic reasons. Hitler's behavior after the Potempa murder in August 1932 was a turning point for him. Schwerin commented on the murders of June 30, 1934 during the Röhm putsch with the words "whoever doesn't get it now ...". 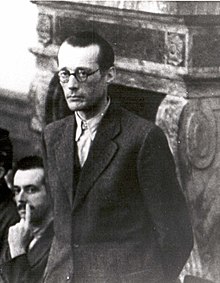 It was a long way from rejecting the Nazi regime to active resistance . Schwerin did not go it alone, but together with friends, such as his Roßleber school friend Peter Graf Yorck von Wartenburg , his cousins Fritz-Dietlof Graf von der Schulenburg and Albrecht von Kessel, and with Eduard Brücklmeier . These were young officials from the internal administration and the foreign office. A group of friends was formed which, as a result of the Sudeten crisis in September 1938, was given the opportunity for the first time to work together to prepare for a planned coup .

They looked for and found the connection through the Abwehr officer Hans Oster to General Erwin von Witzleben , who as commander of Defense Area III in Berlin held a key military position. These two officers determined Schwerin's future path when he was drafted as a lieutenant in the reserve at the beginning of the war. Schwerin took part in the invasion of Poland and then joined the staff of the Colonel General, later Field Marshal von Witzleben, on the Western Front in October 1939. Schwerin remained on the staff as the Marshal's orderly officer until mid-1942. After a few months in Utrecht , he was transferred to Berlin to the Brandenburg Division in February 1943 and from May 1944 to an office of the Quartermaster General. Until his departure in 1942, Witzleben played an important role in the deliberations of the Berlin resistance circles as Commander-in-Chief West and therefore an active troop commander, and then because of his high rank. Schwerin kept in touch with the Field Marshal and strengthened his critical view of the regime. He will also have informed him about the mass murders in the Sartowitz Forest in autumn 1939. By being transferred to Berlin, Schwerin had arrived at the center of resistance activities, which led to a new phase after the Battle of Stalingrad .

Through his friend Peter Yorck, he was constantly informed about the results of his work in Kreisau , without belonging to this group. Immediately after Stauffenberg's arrival in Berlin in September 1943, he became friends with him. The former chief of staff, Ludwig Beck , who represented the recognized headquarters of the military resistance, made Schwerin his personal assistant in autumn 1943. In the planning for the transitional government after the overthrow, the three friends Schwerin, Yorck and Schulenburg were included as state secretaries for the designated head of state Beck, the Reich Chancellor Goerdeler and the interior minister Leber . They were part of the younger generation who, in conjunction with Stauffenberg, actively prepared the coup . Conceptually, Schwerin and his friends relied on the results of the work of the Kreisau Circle and kept in close contact with the Social Democrats Leuschner and Leber.

The 20 July 1944 experienced Schwerin in the center of the coup, in the premises of the commander of the Reserve Army in the War Office (now the German Resistance Memorial in Stauffenbergstrasse) in Berlin. He was arrested there shortly before midnight after the failure of the coup, along with Yorck, Schulenburg and others.

Schwerin's detention stations were the Gestapo house prison at Prinz-Albrecht-Strasse 8 , the cell building of the Ravensbrück concentration camp and, in turn, Prinz-Albrecht-Strasse. In the fourth trial against the members of the coup on August 21, 1944, the People's Court , chaired by its President Roland Freisler, sentenced him to death and confiscation of the property. During a questioning, Schwerin named as the motive for his resistance activity "the many murders that have happened at home and abroad" before he was shouted down by Freisler and described as a "shabby rascal" .

On September 8, 1944, Count Schwerin was killed with a wire noose in Plötzensee along with the five other convicts Georg Alexander Hansen , Ulrich von Hassell , Paul Lejeune-Jung , Josef Wirmer and Günther Smend .

His wife, sons and mother came in Guestrow and Dresden in guilt by association , the two older sons ( Wilhelm Graf Schwerin von Schwanenfeld 15 and Christoph Andreas Graf von Schwerin from Schwanfeld age 12) was a little later in the Kinderinternierungslager Bad Sachsa brought.

His body was cremated in the Wilmersdorf crematorium along with those of the other five people executed on September 8, 1944 . Their ashes were handed over to the First Public Prosecutor Pippert in the Reich Ministry of Justice the following day in a collecting container . In 1978 the widow erected a cenotaph with epitaph at the Waldfriedhof in Berlin-Dahlem in Dept. 10A-11 , which is maintained as an honorary grave for the State of Berlin .

In memory of Ulrich-Wilhelm Graf Schwerin von Schwanenfeld, streets in Berlin , Rostock , Potsdam and Wünsdorf were named after him, and memorial stones were erected on the forest cemetery in Berlin-Dahlem and Woldegk in the Göhren district. On the basis of a resolution by the city council of Woldegk, Ulrich-Wilhelm Graf Schwerin von Schwanenfeld was made an honorary citizen of the windmill town of Woldegk with effect from October 3, 2012.