This article covers the city in the Netherlands. For further meanings see Utrecht (disambiguation) . 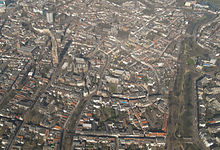 Utrecht ( ˈytrɛxt , listen ? / I ) is a Dutch municipality and the capital of the province of Utrecht . On January 31, 2019, the population was 352,936 ( agglomeration : 660,000). The fourth largest city in the Netherlands is centrally located, which is why the Utrecht Centraal train station is of great importance for long-distance connections. Utrecht has an important university , a music academy ( Conservatorium ) and a technical college (Hogeschool) . The city is the seat of both a Roman Catholic and an Old Catholic Archbishop and is the birthplace of Pope Hadrian VI.

To the west of the city around Vleuten is the planned district of Leidsche Rijn . The largest urban development project in the Netherlands, covering an area of ​​around 20 square kilometers, is to provide a total of 100,000 people with living space and workplaces. Template: future / in 5 yearsWhen planning this model district, great importance was attached to the implementation of the smallest possible settlement method with many homes, which are often on the banks of small canals. The residents should reach all infrastructure facilities such as childcare, schools, shopping centers, leisure and sports facilities as quickly as possible via the cycle path network.

Although there are signs of an earlier settlement of the region of Utrecht in the Bronze Age , the Roman fort Traiectum, built under Emperor Claudius (ruled 41–54 AD) on the Lower Germanic Limes in the area of ​​today's center of Utrecht , is usually regarded as the oldest settlement core . Its origin was probably related to the strengthening of the Lower Germanic Limes under the governorship of Gnaeus Domitius Corbulo in AD 47. The fort was located on the southern bank of the former Kromme Rijn , probably near a ford like the name Traiectum ("river crossing" ) indicates. According to archaeological findings, it was destroyed in 69 by a fire that was probably triggered by the Batavian uprising , but was soon rebuilt. At the end of the 2nd century, the wood-earth fortification of the 1.7 hectare military camp, designed for around 500 soldiers, was replaced by a wall made of tuff . In the east and west of the fort, the remains of the civil settlement ( vicus ) connected to it were found. Traiectum is already listed as a place name in the Itinerarium Antonini . The fort appears to have been destroyed a few decades before the Franks invaded in AD 270; a permanently occupied Roman fortification was no longer there.

Little is known about the history of Utrecht from the 4th to the end of the 6th century. A church built in the former Roman fort in Utrecht has been attested since the beginning of the 7th century when the city was under the rule of the kings of the Franconian Empire of Austrasia . King Dagobert transferred the Utrecht church around 630 to Bishop Kunibert of Cologne , who was to evangelize the Frisians . However, the Frisians did not allow themselves to be Christianized at first, but instead came into the possession of Utrecht in 650. Later attempts at conversion, including those initiated in 678/679 by Bishop Wilfrid von York , were of little fruit. On the other hand, St. Willibrord , who was appointed Archbishop of the Frisian people by Pope Sergius I in 695 and was supposed to set up a bishopric in Utrecht under the Roman Church, had greater and lasting success . As the Frisians advanced again in 715/716, Willibrord was forced to retreat to his monastery in Echternach . In 719/722 Karl Martell re-conquered the former Franconian Friesland, whereupon Willibrord was able to proselytize again.

The place got the name Ultra Traiectum ("beyond the river crossing") / uut Trecht ("outside Trajectums"), compare Dutch uit ("from"). In old prints in the imprint the location Trajecti ad Rhenum or Traiecti Batavorum can be found .

The city was first attacked and sacked by Vikings in 834 . The bishop was forced to leave the city in 857 due to the threat posed by pagan Vikings and Frisians . His diocese was administered from Deventer for over 60 years . Emperor Otto I granted the town market rights in 936 ; Utrecht's economic importance grew with the decline of Dorestad, 20 kilometers away . A last attack by Vikings took place in 1007.

In the 12th century, Utrecht became a walled city . The city charter was given to it by Emperor Heinrich V in 1122. As a bishopric , the city was of great importance; therefore it is rich in medieval churches , even if some like the Mariakerk have not survived. Due to the rain construction of churches, monasteries and abbeys a strong presence of evolved in Utrecht sculptors , masons and carvers who worked with the equipment of the religious building. Her art, which in part also had non-religious content, was also acquired by wealthy merchants and citizens. The work achieved a high quality, so many sculptures up to the Lower Rhine and after Spain , in the Normandy and after Norway were exported. The raw materials for the works of art were imported from distant European countries: high-quality oak wood came by ship from Poland and Lithuania , Baumberger sand-lime brick from the Münsterland , Bentheim sandstone from the County of Bentheim and Avesnerstein from Avesnes-le-Sec in northern France . At that time Utrecht was economically, politically, religiously and culturally the center of the northern Netherlands.

The first iconoclasm reached the city in 1566, and two more were to follow by 1580. Many works of art that had adorned churches and monasteries were destroyed. In 1559, Utrecht became an archbishopric and thus independent from the archbishopric of Cologne . This happened at the instigation of King Philip II , who viewed the downsizing of the dioceses as a church-political instrument against the Reformation . In 1576, during the Eighty Years' War there was an uprising in the city against Spanish rule in the Netherlands, and the Vredenburg citadel was captured and later razed; the rubble was reused for other structures. With the Reformation and the ensuing iconoclasm as well as the ongoing political tensions between the crown and the city, the heyday of Utrecht sculpture ended.

The Union of Utrecht was concluded here in 1579 .

In 1636 the university was founded. On August 1, 1674, a tornado destroyed church towers, roofs and almost the entire nave of the Utrecht Cathedral . The city temporarily lost its importance, but grew strongly again after it had railway connections and the like in the 19th century. a. to Kampen , Boxtel and 1855 to Rotterdam .

In 1723 there was a schism between the clergy of the Archdiocese of Utrecht and the Holy See , which gave rise to the Roman Catholic Church of the Old Episcopal clergy . It was often simply called the Church of Utrecht. It was not until 1853 that Utrecht became the seat of a Roman Catholic Archbishop who was not separated from Rome, so that there were two "Roman Catholic" Archbishops there. In the Kulturkampf, the church of Utrecht used its power of ordination and took the lead of the Old Catholic churches . During the First World War , the Netherlands was neutral; nevertheless, the war had a major impact on living conditions.

In 1931, the fascist Nationaal-Socialistische Bewegungsing (NSB) was founded in Utrecht and its headquarters were on Maliebaan 35 until May 1945.

In his terrorist attack in Utrecht in 2019 , the criminal offender shot and killed four people.

The Peace of Utrecht

The name Utrecht appears again and again in important negotiations and contracts that were of world historical importance. Here, among other things, after the end of the Spanish Wars of Succession in the 18th century, a treaty was negotiated which , in addition to regulating the great powers in Europe, also regulated their colonial property. Furthermore, a contract was negotiated here as early as the 15th century in order to clearly define the Hanseatic League's ownership claims .

There are tours on the canals through the old town, with stops at many museums, z. B. Dutch Railway Museum , University Museum , Museum Speelklok and the Centraal Museum Utrecht .

The tower of the cathedral

Memorial near the cathedral, which commemorates the Second World War 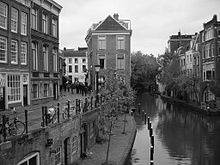 The Oudegracht , the main canal in the old town of Utrecht

The city has a diverse industry, but the service sector is more important. Many insurance companies, the second largest Dutch bank Rabobank and some smaller banks, etc. a. The Dutch part of the Fortis Group, the software department of the German Wincor Nixdorf , energy suppliers such as Econcern , the conglomerate SHV Holdings , many institutions such as the trade unions of the Netherlands and the Dutch railway company Nederlandse Spoorwegen have their headquarters in Utrecht. In 1916 the Jaarbeurs , the Utrecht fair, was founded. Utrecht is the fastest growing city in the country.

In 2017, Utrecht decided to convert the historic inner city area into a “zero emission” zone. Internal combustion engines should be completely locked out; only electric vehicles and bicycles are to be permitted as vehicles.

With the Utrecht Centraal station, the city ​​is the most important railway junction in the Netherlands.

125,000 people cycle to work, shopping, school or university in Utrecht every day. Therefore, double-decker bicycle racks were erected in front of the station. Along the well-developed cycle paths there are electronic displays for free parking spaces in the 16 bicycle garages in the city center with around 12,500 spaces.

The urban bus network in Utrecht is operated by U-OV ( Qbuzz ). U-OV also operates the Utrecht light rail system from Utrecht Centraal Station, the city's main train station, with connections to the two suburbs of Nieuwegein -Zuid and IJsselstein -Zuid in the province of Utrecht. The Qbuzz transport company operates two lines with ten innovative electric buses, whose electricity is inducted into the batteries in the vehicle floor at the stops.

The light rail is also known under the names Utrechtse sneltram and Sneltram 60 (route to Nieuwegein-Zuid) and Sneltram 61 (route to IJsselstein-Zuid). An extension of the tram network with a line to the university area Uithof ( Uithoflijn ), east of the city, is under construction and should be operational by 2020 at the latest.

The Merwede Canal and its extension to the Amsterdam-Rhine Canal are also important for Utrecht. In the city center, pubs and restaurants are regularly supplied with electric boats, such as the beer boat and the ecoboot , via the canal. The garbage is also disposed of in this way.

The Schiphol airport capital Amsterdam is about 40 kilometers of Rotterdam The Hague Airport is about 65 km and the Eindhoven Airport about 90 kilometers away.

See also : List of personalities from the city of Utrecht

There is a branch of the Holland Casino in Utrecht.

On September 8, 2003, a 45-meter-high transmission mast was accidentally felled in a suburb of Utrecht during tree work .

The so-called Utrecht Model was introduced in the city in 1986, which enables street prostitutes to carry out their work in a protected and controlled area to protect street prostitutes from acts of violence and other forms of crime .

Some former E6 / c6 light rail vehicles, which ran on the U6 line in Vienna , were sold to Utrecht to be used in the local tram network.

By George Frideric Handel , there is the Utrecht Te Deum and Jubilate , which he commissioned by Queen Anne to celebrate the Peace of Utrecht wrote the 1713th

Municipalities of the province of Utrecht