The Partij van de Arbeid (PvdA; pronounced [pɑrtɛi vɑn də ɑrbɛit] ), German  Labor Party , is a Dutch political party with a social democratic orientation that has been represented in the Second Chamber without interruption since it was founded in 1946 . It continues the tradition of the Sociaal-Democratische Arbeiderspartij founded in 1894 .

In terms of membership, the party ranks second behind the Christian Democrats . After the Second World War, she appointed the Prime Minister four times. In the 2010 and 2012 elections , it became the second largest parliamentary group in the Second Chamber after the right-wing liberal People's Party for Vrijheid en Democratie . In the 2017 election , she dropped to seventh place and achieved by far the worst result in her history.

Before the Second World War , the left-wing camp was dominated by the Sociaal Democratische Arbeiders Partij (SDAP), which had been founded in 1894. Compared to the German SPD , it developed less powerfully. The reasons given were that the party was in competition with the Sociaal-Democratische Bond (SDB), a party that turned to anarchism under Ferdinand Domela Nieuwenhuis ; that industrialization in the Netherlands was slower; that the right to vote excluded poorer sections of the population for a long time. As early as 1909, the radical Marxist SDP separated from the SDAP.

A co-founder and leading politician of the SDAP was Henri van Kol , who made a name for himself with his speech duel with Karl Kautsky at the International Socialist Congress in Stuttgart in 1907 . Kautsky wanted to push through a rejection of European colonial policy, which Van Kol tried to prevent.

Jelles Troelstra was one of the most famous leaders of the SDAP . In 1919 he aimed for a revolution based on the Russian and German models. However, the revolution failed because the population remained loyal to the monarchy. The SDAP continued to work in parliament, but was boycotted by the other parties. It was not until 1939 that it entered the Gerbrandy cabinet . After the invasion of German troops, the SDAP was placed under supervision in 1940 and dissolved shortly afterwards.

Established as PvdA in 1946

After the liberation the establishment of a large left people's party including the left liberals was sought. On February 9, 1946, the PvdA emerged from the amalgamation of three parties: the SDAP, the left-liberal Free Democratic Federation (VDB) and the left-Protestant Christian Democratic Union (CDU) .

Although the new party also received support from the camp of former resistance fighters such as the Catholic Christofoor and Protestant movements, it was recognizable in the tradition of the SDAP. The dogmas of “pre-war socialism” were gradually removed from the party statutes. In the 1950s, the PvdA worked mainly with the Catholic People's Party together (Roman red cabinets) , as well as in a brief interlude 1966th

It did not return to government until 1973, after forming a left-wing platform with other parties in the previous election. In 1977, Joop den Uyl's prime ministerial presidency was rewarded at the ballot box, but his left-wing politics had consequences for the party: on the right, the Democratic Socialists '70 party split off, which was quite successful for two electoral terms; and in 1977 the Christian Democrats refused to participate in a cabinet that would be dominated by the New Left within the PvdA. The New Left ( Nieuw Links ) was open to feminism , Third World problems and social reforms and wanted to recognize the GDR at an early stage.

The party only held longer government responsibility again since 1989, in a coalition under the Christian Democrat Lubbers . This participation in government by the pragmatic finance minister Wim Kok has been resented by the Uyl party veteran. In 1994 the PvdA succeeded for the first time in bringing about a government without the Christian Democrats. The “purple” cabinet under Wim Kok, made up of social democrats, right-wing and social liberals , carried out reforms of a legal political nature ( euthanasia , gay marriage , etc.) and also appeared to be successful in economic policy. The 1998 election confirmed the government and again the PvdA became the strongest party.

Opposition and renewed participation in government 2007/10 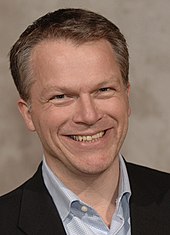 In the 2002 election, the PvdA crashed dramatically, from 29 to 15 percent. The triumphant advance of Pim Fortuyn in particular had led to this, but also the regeneration of the Christian Democrats and the resignation of the cabinet because of a report on their behavior during the Srebrenica massacre . Koks "Crown Prince", the uncharismatic Minister of Social Affairs Ad Melkert , could not convince. There were also negative aspects of the social policy of the social liberal cabinet, with a debate about the combined wage and the many people unable to work. The opposition charged huge hidden unemployment .

In 2003 the PvdA recovered under the leadership of Wouter Bos , followed by losses again in 2006. From 2007 to 2010 the PvdA was a junior partner in a government under Jan Peter Balkenende . One of the party's greatest worries in the 2000s was the success of the Socialist Party : in the 1990s it was still a splinter party, and in 2007 it became the third-strongest party with 16.6 percent - at the expense of the Greens , but above all the PvdA.

Since the coalition break in February 2010, the PvdA has been in the opposition again. On March 12, 2010, the former Finance Minister Wouter Bos announced his retirement from politics. Job Cohen appeared as a candidate for party leadership , who therefore resigned as Mayor of Amsterdam on the same day. In the election in June 2010 , the party suffered slight losses, but was almost the second strongest force in the Second Chamber after the VVD. In 2012 , the PvdA surprisingly increased under the top candidate Diederik Samsom , but again had to admit defeat to the VVD very narrowly. The Rutte II government , the first under the leadership of the right-wing liberals, was formed with the help of the PvdA.

Opposition and participation in government 2010–2017

During the first Rutte government (VVD, CDA, with parliamentary support from the PVV), from 2010 to 2012, the PvdA sat in the opposition. At the end of this period, Job Cohen resigned as party leader; he was replaced by Diederik Samsom, who had been elected by the members. In the parliamentary elections in 2012, the PvdA received 38 seats and formed the Rutte II cabinet with the VVD. This government was heavily criticized by its members and voters, especially because of its strict austerity measures. In autumn 2016 Lodewijk Asscher was chosen as the top candidate for the parliamentary election on March 15, 2017 ; Samsom resigned from the Tweede-Kamer faction. In the 2017 parliamentary elections, the Partij van de Arbeid fell to a historically low election result and only achieved 5.7 percent of the vote and only 9 seats in the Second Chamber.

The PvdA has appointed the Prime Minister three times:

As a junior partner, she was also involved in coalitions several times:

PvdA poster in a house in Silvolde (local election March 2010)

Although the connection of voters to political movements is becoming weaker and weaker and Dutch politics has often seen huge voter migration from one party to another, it can be said that the support of the PvdA is particularly strong among the socially disadvantaged, workers, immigrants and the lower middle class is found. In big cities (e.g. Amsterdam or Rotterdam ) it gets its best results. It has far fewer supporters in Noord-Brabant and Limburg .

V
Parties in the Netherlands