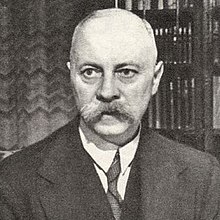 From 1920 to 1930 he was a member of the Provincial Parliament of Friesland for the Anti-Revolutionaire Partij (ARP) . Later he was a law professor at the Free University of Amsterdam and since 1939 Dutch Minister of Justice. From 1936 to 1940 he was co-editor of the Amsterdam legal journal Intellectual Property - Copyright - La Propriété Intellectuelle .

After the German attack on the Netherlands , the Netherlands capitulated on May 14, 1940. The royal family and government fled to London. Gerbrandy took over the office of Prime Minister of the government-in-exile in London. He declared war on December 8, 1941, the day after the Japanese attack on Pearl Harbor , Japan. On September 4, 1944, he announced the imminent liberation to the Dutch on Radio Oranje . The focus of the military actions of the Allies then shifted towards Germany, so that in connection with a railway strike he initiated and the subsequent embargo by the German occupation under Arthur Seyß-Inquart, the food supply for the population collapsed and there was a hunger winter in the Netherlands came. He was only able to return to the Netherlands in April 1945. After his resignation he fought in particular the East Asian policy of the new government. In 1955 he was given the honorary rank of Minister of State .

His grave is in the Oud Eik en Duinen cemetery in The Hague.