The building of the Berlin Wall , which finally cemented the division of Germany, is defining for the year 1961 . Meanwhile, the newly elected US President John F. Kennedy announces his New Frontier policies , including ending racial segregation in the United States. With the failure of the Bay of Pigs invasion , however, he had to accept a foreign policy defeat right from the start. Yuri Gagarin overcomes a completely different frontier and becomes the first person in space on board Vostok 1 . 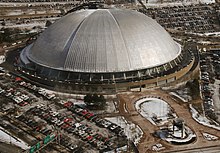