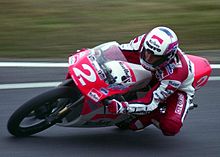 Gresini on Honda at the 1992 Japanese Grand Prix

He contested a total of 118 races in the motorcycle world championship between 1983 and 1994 and won the title in the 125 cc class in 1985 and 1987 . Today Gresini is successful as the owner and team leader of the MotoGP racing team Gresini Racing .

Fausto Gresini drove his first races in 1978 at the age of 17 on a 50 cm³ Minarelli . In 1983 he got on Garelli in the 125 cc World Championship and won his first race in 1984 in Anderstorp, Sweden . Gresini remained loyal to the 125 cc class throughout his entire active career and set a number of records there. B. eleven wins in a row ( 1986 / 87 ) and ten wins in eleven races in one season (1987). After he only finished 16 in the World Championship on Honda in 1994 . Fausto Gresini decided to retire after 118 grands prix, in which he achieved 47 podium places.

In 1997 Gresini returned to the racetracks as team manager with his own racing team. He used Alex Barros on a private Honda in the 500cc class. Ninth place overall in the first year brought the team factory machines from Honda for the next season. In the following years the team continued to work successfully. With Daijirō Katō , the 2001 world title in the 250 cm³ class was won. In addition, riders from the Gresini team took second place three times in the MotoGP class ( Sete Gibernau 2003 and 2004 , and Marco Melandri 2005 ).

Fausto Gresini is married to his wife Nadia and has three children (Luca, Lorenzo and Alice).

In the motorcycle world championship