Capirossi is 165 cm tall and weighs approx. 59 kg, he started for years with the starting number 65 in the MotoGP class of the motorcycle world championship . From 2003 to 2007 he drove for Ducati , since the 2008 season the Italian competed for Suzuki . In 2011 he started again for Ducati.

His nickname "Capirex" was given to him by Kenny Roberts Jr. awarded. In January 2007 he jokingly changed it to “CapiTrex” based on the Tyrannosaurus rex , as some people have already called it a “ dinosaur ” because of its age and the fact that it was in the motorcycle world championship before its 18th season .

Like many other pilots, Loris Capirossi began riding motorcycles at a very young age. He gained his first experience at the age of four on an off-road motorcycle. In 1986 he drove his first motocross race , in 1987 he contested his first road race in Magione . In the same year he completed the Italian Sport Production Championship on a Honda NS125 and was sixth.

In 1988 Loris Capirossi finished ninth overall on Mancini in the Italian 125 cc championship. In the following year, 1989, he was able to show his promising talent with a Honda in the 125 cc European Championship . He finished fourth in the overall standings with four race wins and was recommended for a place in the world championship.

Loris Capirossi made his debut at the Japanese Grand Prix in 1990 at the age of 16 in the 125cc class of the motorcycle world championship on a Honda in the Pileri team of Paolo Pileri , the 125cc world champion from 1975 . His teammate was the world champion of 1985 and 1987 , his compatriot Fausto Gresini . In his third race, the Grand Prix of Nations in Misano , he achieved his first podium. Later, at the British Grand Prix at Donington Park , even his first win. After winning the last two World Championship races in Hungary and Australia , he overtook the Dutchman Hans Spaan, who had been leading in the overall standings . Capirossi was world champion in the class up to 125 cm³ with a total of eight podium places and 182 points, nine points ahead of Hans Spaan. He beat all established stars of the time such as Martínez , Spaan or Gresini and also became the youngest motorcycle world champion in history, a record he still holds today.

In the 1991 season he continued to compete for Pileri-Honda. At the second round of the season in Australia he achieved the first pole position of his career, which was followed by four more during the season. Loris Capirossi was ultimately able to achieve five wins and twelve podium places this year and successfully defend his world title. With 200 points, he ended up with 19 more points than Vice World Champion Fausto Gresini. Capirossi was already double world champion at the age of 18.

After only two seasons in the small class, he was promoted to the 250 cc class in 1992 . In the 250s he won 13 Grand Prix and made 39 podiums. As a highlight, he celebrated his third and so far last world title in 1998 with Aprilia . The title decision was made in the last race against his team-mate Tetsuya Harada through a tough overtaking maneuver. Capirossi was first disqualified, but rehabilitated shortly afterwards. However, Aprilia was dismissed at the end of the season. In the following year he drove for the team of Fausto Gresini on Honda again in the 250 cc class and came third in the World Championship. For the 2000 season he was finally promoted to the premier class.

The 1995 season was the first for Loris Capirossi in the 500 cc class, he drove a Honda and was able to regularly place in the top ten. His best result was a third place at the Grand Prix of Catalonia . At the end of the season he finished sixth in the overall standings.

For the 1996 season he moved to Wayne Rainey's team and drove a Yamaha . Although he was able to achieve his first victory in the premier class at the season finale, the Australian Grand Prix , it was only enough for a tenth place in the championship. Capirossi then decided to return to the 250 cm³ class for the time being.

In 2000 , Loris Capirossi moved back to the 500 cc class, this time to the Sito Pons team , where he drove a Honda. At the Italian Grand Prix in Mugello , he celebrated his second victory in the premier class. In the overall ranking, Capirossi finished seventh with 154 points.

The 2001 season was the best in Capirossi's 500cc career to date. Although he could not win a race, he achieved third place in the world championship after a total of nine podium finishes with 210 points.

Capirossi 2002 on a Pons Honda

For the 2002 season , the 500 cc class became the MotoGP class. Associated with this was the change in the technical regulations, which now allowed motorcycle prototypes with a maximum of 990 cc four-stroke engines. The 500 cc two-stroke engines were still allowed. Since the Sito Pons team, for which Capirossi continued to drive, was not an official works team, Honda did not initially provide them with a four-stroke engine. Capirossi and his teammate at the time, the Brazilian Alex Barros , had to contest the season with the inferior two-stroke machines. Despite this inferiority, Capirossi made it into the top 10 regularly and was even able to take two third places. Towards the end of the season Barros, in contrast to Capirossi, was given a Honda four-stroke engine and was able to achieve two victories. Capirossi was so disappointed that he was not considered that he decided to accept an offer from Kawasaki for the 2003 season . But when he found out that they would compete on the defeated Dunlop tires , he finally signed a contract with MotoGP newcomer Ducati .

In the first year he was able to win a race with the new Ducati Desmosedici at the Grand Prix of Catalonia in Barcelona , clinching three pole positions and one fastest race lap. Together with his teammate Troy Bayliss , he achieved second place in the constructors' championship for Ducati. Capirossi came fourth overall with 177 points.

The 2004 season was less successful for Capirossi and Ducati; third place at the Australian Grand Prix was the best result of the season. With 117 points he was only ninth in the World Cup. 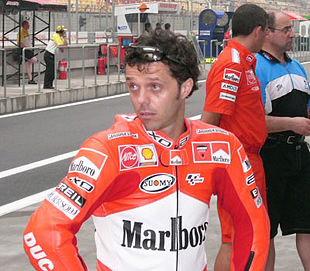 For the 2005 season Ducati switched from Michelin to Bridgestone tires, but these fluctuated so much in their performance from track to track that Loris Capirossi was able to achieve two victories for Ducati in Motegi and Sepang , but often not even among the first ten came. During free practice for the Australian Grand Prix in Phillip Island , Capirossi fell so badly in turn one that he suffered internal injuries (bleeding in the left lung). He was unable to compete in the subsequent Turkish Grand Prix due to injury. He made his comeback at the season finale, but couldn't get past seventh place due to physical problems. He finished the season with 156 points in sixth place in the drivers' standings. 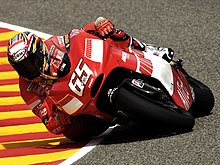 The 2006 season he continued to play for the Ducati works team in the MotoGP class. His teammate was the vice world champion in 2003 and 2004, Sete Gibernau from Spain. After winning the opening race in Jerez, Capirossi even led the world championship at times. After a serious accident at the Grand Prix of Catalonia, in which team-mate Gibernau hit him and both fell, he was only able to contest some races with great pain and therefore fell back in the overall standings. In the second half of the season, Capirossi was able to win the Grand Prix of the Czech Republic and Japan. In the last race of the season, the Valencia Grand Prix , he finished second behind Troy Bayliss , who had substituted for the injured Gibernau, and thus celebrated the first Ducati double victory in MotoGP history. With this result, he was able to overtake Marco Melandri , who was ahead of him in the overall standings, and ultimately came third in the world championship behind world champions Nicky Hayden and Valentino Rossi . With three wins and a total of eight podium finishes, Capirossi collected 229 points, more than ever before in a season of his career. 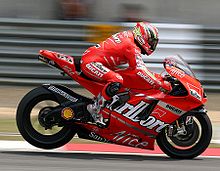 The 2007 season denied Loris Capirossi for Ducati in the MotoGP class. His teammate was Australian Casey Stoner . The change in the power delivery of the Ducati caused by the prescribed reduction in displacement to 800 cm³ caused Capirossi great difficulties, especially in the first races. In the middle of the season the motorcycle was better adapted to Capirossi's driving style. He subsequently achieved second place in the German Grand Prix at the Sachsenring , won the Japanese Grand Prix for the third time in a row and completed the year’s only Ducati double victory in Australia as second behind Stoner. His team mate Stoner was the superior world champion, but Capirossi was only seventh overall.

On July 23, 2007 it was announced that Capirossi will be replaced by Marco Melandri in the Ducati factory team from 2008 . Nevertheless, the Italians made him the offer to drive a works machine in the private D'Antin team the following season , and Kawasaki and Suzuki also tried to help him. Disappointed with the way Ducati treated him, Loris Capirossi decided to take Suzuki's offer. In the 2008 season he started in the Suzuki works team at the side of the Australian Chris Vermeulen . In the first third of the season, the Italian was consistently in the top ten, but without being able to achieve podium positions. At the Grand Prix of Catalonia in Barcelona he broke his right hand in an accident caused by Alex De Angelis and had to pause the following race in Great Britain. Capirossi returned to the Dutch TT in Assen, but was injured again in the second free practice session and was again unable to take part in the Grand Prix. At the Czech Grand Prix in Brno he achieved the first podium of the season with third place. At the following Grand Prix of San Marino in Misano , Italy , Loris Capirossi made his 277th Grand Prix start, surpassing the previous record of the Brazilian Alex Barros .

The Italian also started for the Suzuki team the following season . Despite his now 36 years, Capirossi was still highly motivated, but unfortunately budget cuts by Suzuki did not allow better placements than four fifth places in Italy, Catalonia, the Czech Republic and San Marino. Loris finished the season in ninth place with 110 points. After all, he was four points ahead of his team-mate Vermeulen .

In 2010, Capirossi continued to drive a Suzuki. His new teammate was the young Spaniard Álvaro Bautista . Unfortunately, with 44 points, the season was his worst MotoGP result to date. In the end there was only 16th place.

Capirossi on Pramac-Ducati in his last season

In the 2011 season, Capirossi rode in the Pramac-Ducati team, i.e. on a customer Ducati Desmosedici . On September 1, 2011, he announced his retirement at the end of the season. He contested his last race on November 6, 2011 at the Valencia Grand Prix, finishing ninth. Capirossi drove a total of 328 races and won their 29. He was also three times world champion and came on the podium 99 times.

Since then he has been working as a safety advisor for the motorcycle world championship organizer Dorna.

In the motorcycle world championship

Records in the motorcycle world championship

Loris Capirossi is married to the Slovenian- born former model Ingrid Tence and lives in Monaco . On April 2, 2007, their first son was born.