The title of this article is ambiguous. Further meanings are listed under Honda (disambiguation) .

Logo of the Honda Automobiles department 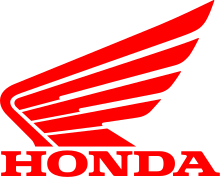 Logo of the Honda Motorcycles department

With an annual production of 22 million engines, Honda is the largest engine manufacturer in the world. Honda employs around 218,000 people in production facilities in 30 countries around the world. The company's headquarters are in Tokyo . At the beginning of 2020, 649,966 Honda motorcycles were registered in Germany, which corresponds to a share of 14.4%.

The European Honda Motor Trading GmbH (Germany Honda) in Hamburg was founded in May 1961st The company headquarters of Honda Deutschland GmbH , with around 162 workplaces, has been in Frankfurt am Main since 2013 . The president is Takahiro Hachigo. The German research department Honda R&D Europe , with more than 100 engineers and scientists, is still located in Offenbach am Main .

With sales of $ 142.4 billion and profits of $ 4.3 billion, Honda ranks 83rd among the world's largest companies according to Forbes Global 2000 . Honda's market capitalization is currently around $ 42 billion. (Status: 2020)

Honda was founded on September 24, 1948 and bears the name of the founder, Sōichirō Honda . At the beginning of the company's history, motors were produced to drive bicycles.

Alongside Toyota, Honda is one of the few independent Japanese automobile and motorcycle manufacturers. This is due to the fact that the company was successful during the restructuring of the international car and motorcycle market and managed not to have to merge with other companies or to lose its independence through the acquisition of foreign investors. Honda has been using the Acura brand name for its luxury automobiles since 1986 . These are only sold in North America, China and Hong Kong.

Honda's public profile is also shaped by its motorsport activities .

Honda also competed with a team in Formula 1 (see Honda Racing F1 ) and in Formula 2 as an engine supplier. In the late 1980s and early 1990s, Honda dominated Formula 1 with its engines and won six world championships. Honda's figureheads at the time were Nelson Piquet and Nigel Mansell , as well as Ayrton Senna and Alain Prost , who won 15 out of 16 races in the last turbo season of Formula 1 in 1988. Ayrton Senna contributed significantly to the development of the Honda NSX in addition to winning the world championship . In December 2008 Honda stopped the Formula 1 activities as a result of the prevailing financial crisis for cost reasons.

As the world's largest motorcycle manufacturer, Honda offers models in all classes and categories. The currently fastest motorcycle in production is the CBR1100XX "Blackbird" presented in 1997 with a top speed of 286 km / h.

The flagship of the Honda touring motorcycles is the Gold Wing series, built in Kumamoto (Japan). This luxury tourer is currently powered by a 1.8 liter six-cylinder boxer engine with 87  kW (118 hp). The dry weight of this motorcycle is 363 kg and it has a reverse gear for maneuvering.

In 2000 the company introduced the humanoid robot ASIMO . 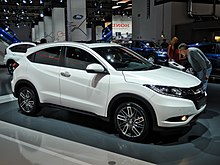 Currently (2019) Honda sells models in Germany with the following engines:

At the moment (spring 2018) Honda sells the following models in Europe:

Honda was involved several times in various classes of automobile sport . The company pursued very different concepts over the decades. In some cases, it only supplied engines for existing teams who used the engines in their own cars under their own management; In addition, Honda also repeatedly operated a so-called works team in Formula 1, which brought its own engines and cars to the start:

In 1959 , Honda first took part in the popular Tourist Trophy raceon the Isle of Man Clypse circuit (17.63 km) in the 125 cc class. The racing machine RC141 was equipped with a 2-cylinder DOHC - parallel twin and had a vertical shaft to the cylinder head with two valves per cylinder. The engine had a compression ratio of 10.5: 1, developed 18 horsepower at 13,000 min -1 and had a 6-speed transmission. Since it was recognized during the training that they were not competitive, new cylinder heads with 4 valves per cylinder were flown in from Japan. The engine had now 18.5 hp at 14,000 rpm -1 kg weighed 87th This racing machine was now called the RC142 and was the machine that made Honda's racing debut in Europe. The head of the Honda racing group was the 30-year-old American Bill (William Hunt), the general manager of American Honda and winner of the Asama race in Japan in 1958. The other drivers were Naomi Taniguchi, Junzo, Giichi Suzuki, Teisuke Tanaka, the latter with a RC141 2-valve. Tanaka represented Kunihiko Akiyama, who had a fatal accident shortly before the team left Japan. The new CB 92 was usedto explore the racetrack. In the race, Naomi Taniguchi achieved the first point in the world championship for Honda by finishing sixth. His average speed was 109.9 km / h. With a further seventh place by Giichi Suzuki with 107.4 km / h, eighth by Teisuke Tanaka with 105.7 km / h and eleventh place by Junzo Suzuki with 102.7 km / h, the Honda team won the team award and the first cup. The Honda team was led by Kiyoshi Kawashima , who later became president of the company.

In 1960 the Honda team took part in the Isle of Man TT again. They had the RC143 going with a revised 2-cylinder parallel twin DOHC, the 22 hp at 14,000 rpm -1 produced and weighed 93 kg. The Australian Tom Phillis , Naomi Taniguchi, Giichi Suzuki, Teisuke Tanaka, Moto Kitano and Shimakazi were the racing drivers. Phillis qualified second fastest in practice, but spark plug problems only made him tenth in the race.

In 1961 , Tom Phillis drove with the starting number 60 in Barcelona the first victory in the first race of the season for Honda. He also won the first road world championship for Honda in the 125cc class on the RC143 and RC144 , with 21 hp at 14,000 rpm -1 . The later 2RC143 the # 26 had 23 horsepower at 14,000 min -1 . That year Honda won 8 out of 11 races and the Constructors and Drivers' Championship. The race in the Isle of Man TT Ultra Lightweight class was won by Mike Hailwood (Mike the Bike) on an RC 143 from last year that he had received from Luigi Taveri . Taveri came in second, followed by Tom Phillis and Jim Redman , all on the RC144.

In 1962 Luigi Taveri won the world championship in the 125cc classwith the RC145 , which he won with six victories. It was planned that the Japanese driver Takahashi would win this class. He also won the first two GPs but had a terrible accident on the Isle of Man that ended that endeavor. # 6 Taveri finished in first place and the first five places in the 125cc Isle of Man TT Ultra Lightweight class went to Honda riders. The RC145 had 24 hp at 14,000 rpm -1 , which each won 10 races this season.

In 1966 Luigi Taveri again won the world championship in the 125cc classwith the RC149 . The RC149 was the first Honda 125cc five-cylinder engine and had 34 horsepower at 20,500 min -1 , which had already in October 1965 the racetrack its premiere. Eight gears and a dry weight of 85 kg brought her the constructors 'and drivers' world championships.

The Honda Aircraft Company , a 100 percent subsidiary based in Greensboro in the US state of North Carolina , developed a business jet , the Honda HA-420 HondaJet . 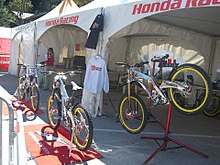 Honda also sponsors its own downhill mountain bike team. "Team G Cross Honda" was the name of the Honda downhill mountain bike team , which was very successful in the Mountain Bike World Cup until 2008 with bikers like Greg Minnaar , Matti Lehikoinen and Brendan Fairclough . In 2007 the team won the overall Downhill World Cup for the second time in a row. The Honda mountain bike was built exclusively for use in the Downhill World Cup and was therefore never available on the market. The agency 23 Degrees Sports Management surprisingly published a press release at the end of 2007, in which it can be read that Honda would completely withdraw from the mountain bike sport.