The 1991 Formula 1 World Championship was the 42nd season of the Formula 1 World Championship . It was held over 16 races from March 10, 1991 to November 3, 1991. Ayrton Senna defended his world title from the previous year and won the drivers world championship for the third time. He led in the drivers' championship from the first race and did not give up this lead until the end of the season. McLaren became world constructors champions for the seventh time. Michael Schumacher made his debut in Belgium on August 25th.

The most important change in the regulations in 1991 concerned the scoring: Now 10 instead of 9 points were awarded for the race victory. The resulting graduation of 10-6-4-3-2-1 points for the first six places was retained unchanged until 2002. In addition, the rules for discarded results did not apply to the ranking for the drivers' world championship: From then on, all results achieved in the course of a season counted.

Compared to this, the changes in the technical regulations were kept within limits: Essentially, the dimensions of the vehicles were limited. The maximum width of the front wing has been reduced from 150 to 140 cm, as has the overhang of the vehicle rear over the rear axle from 60 to 54 cm. Furthermore, the acceptance of crash tests by the FIA ​​was extended to seat belts, fuel tanks and roll bars.

As in the previous year, 16 world championship races were held. The countries of the Grand Prix and their sequence among themselves also remained unchanged. However, two of the races switched to new tracks: The French Grand Prix took place for the first time on the renovated Circuit de Nevers Magny-Cours , after Le Castellet and Dijon-Prenois had alternated as venues since 1973 . The Spanish Grand Prix, on the other hand, moved from the Circuito de Jerez to the new Circuit de Catalunya near Barcelona .

In addition, there are only minor changes to the existing routes. A different route was used on the Phoenix Street Circuit , the venue for the United States Grand Prix . The Silverstone Circuit , on which the British Grand Prix took place, has been expanded to include the new Luffield Infield Passage , and the route in the Becketts section has been revised. On other routes, only adjustments to the start and finish lines were made, so that there were only slight deviations from the race distances compared to the previous season.

Life and EuroBrun did not run again in 1991; Onyx had already given up during the 1990 season. Osella was sold at the end of 1990 and is now operating under the name Fondmetal . The Jordan and Modena team were completely new to the starting field .

Many established midfield teams and less successful designers switched their engine partners. Tyrrell switched from Ford to Honda engines, whereby the ten-cylinder engines that were run by McLaren , the world champion of drivers and designers , were reconditioned by Mugen . Brabham , previously a customer of Judd , competed with exclusive twelve-cylinder engines from Yamaha . Footwork , previously another Ford customer, relied on an exclusive partnership with Porsche , which had also developed a new twelve-cylinder. Lotus and Larrousse lost their Lamborghini engines to Équipe Ligier as well as the Modena team and in turn relied on Judd and Ford engines. A ten-cylinder engine from Ilmor also exclusively used made its debut at Leyton House . Minardi received Ferrari customer engines for the first time .

In contrast, the top teams McLaren, Williams and Benetton kept their engine partners. Also AGS , Osella / rear Metal (both Ford) and BMS Scuderia Italia (Judd) remained with their engine manufacturers. Newcomer Jordan, on the other hand, surprised everyone by being the first customer team to use the Cosworth HB engine, which had previously been reserved for Benetton for two years .

After the Porsche engine turned out to be non-competitive, Footwork switched back to Ford engines in the current season.

Tire manufacturers remained unchanged at Goodyear and Pirelli . However, Minardi and Fondmetal switched to Goodyear as Osella successors, and the new teams Jordan and Modena Team also rely on Goodyear tires. Conversely, only Benetton switched from Goodyear to Pirelli.

McLaren retained its successful driver pairing of world champion Ayrton Senna and Gerhard Berger . Benetton also initially fielded the same drivers with the Brazilians Nelson Piquet and Roberto Moreno who had ended the 1990 season there. The competing teams, on the other hand, reformed: Nigel Mansell switched from Ferrari to Williams, displacing Thierry Boutsen , the previous team partner of Riccardo Patrese , to Ligier, where he met an F1 debutant in Érik Comas . Ferrari signed the young Frenchman Jean Alesi von Tyrrell and placed him next to runner-up world champion Alain Prost .

At Tyrrell, Alesi was replaced by Stefano Modena from Brabham , while the Japanese Satoru Nakajima stayed in the team at the request of Honda. AGS continued to rely on Gabriele Tarquini , alongside him in the first two races started Stefan Johansson , who had initially driven for Onyx in the preseason but was then replaced by Gregor Foitek . BMS Scuderia Italia retained Emanuele Pirro from the previous season , while Andrea de Cesaris switched to Jordan. The Finnish debutant JJ Lehto competed for him .

Brabham set up a completely new driver pairing for which the two Britons Martin Brundle and Mark Blundell , a newcomer, competed. Lotus also had to regroup and brought the debutant Mika Häkkinen and the returning Julian Bailey to the start. Debutant Jordan, on the other hand, used experienced drivers with de Cesaris and Bertrand Gachot . The latter was in the cockpit of the single Coloni by the Portuguese debutants Pedro Chaves replaced

Leyton House continued to bet on Ivan Capelli and Maurício Gugelmin . Michele Alboreto and Alex Caffi also stayed with Footwork . Larrousse also remained unchanged with Aguri Suzuki and Éric Bernard , and Minardi also retained the driver pairing that had ended the 1990 season with Pierluigi Martini and Gianni Morbidelli . Olivier Grouillard took part in the change of ownership of his team and started for Fondmetal after the preseason for Osella.

Numerous other driver changes took place during the season. Only McLaren, Williams, Brabham, Tyrrell, Scuderia Italia, Ligier and Modena Team were not affected and used the same drivers in all 16 races of the season. However, some changes had lasting consequences: Johnny Herbert , who replaced Bailey at Lotus after only four races, stayed with this team until 1994. The dismissal of Alain Prost before the last race of the season as a result of critical words towards the Ferrari team meant that Prost was also suspended for the whole of 1992 and did not return to Formula 1 until 1993. And finally , when Michael Schumacher took over the Jordan cockpit on his F1 debut because of a prison sentence for Bertrand Gachot, he was so surprised that he was permanently signed by Benetton after just one race.

A total of 12 of the 26 drivers who started were rated.

The fastest lap in the race was set by Nigel Mansell , who, however, had to retire on lap 59 due to transmission problems.

A total of 13 of the 26 riders who started were rated.

Senna started from pole position in front of Riccardo Patrese and Alain Prost . Shortly after the start, Nigel Mansell, who had started from fourth place, collided with Martin Brundle and had to end the race early.

A total of 13 of the 26 riders who started were rated.

A total of 12 of the 26 drivers who started were rated.

The Canadian Grand Prix in Montreal took place on June 2, 1991 and went over a distance of 69 laps.

A total of ten of the 26 drivers who started were rated.

The Mexican Grand Prix in Mexico City took place on June 16, 1991 and went over a distance of 67 laps.

A total of twelve of the 26 drivers who started were rated.

The French Grand Prix in Magny-Cours took place on July 7, 1991 and ran over a distance of 72 laps.

A total of twelve of the 26 drivers who started were rated. 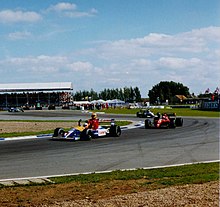 The Great Britain Grand Prix at Silverstone took place on July 14, 1991 and ran over a distance of 59 laps.

A total of 14 of the 26 drivers who started were rated.

The German Grand Prix in Hockenheim took place on July 28, 1991 and covered a distance of 45 laps.

The Hungarian Grand Prix at the Hungaroring in Mogyoród took place on August 11, 1991 and covered a distance of 77 laps.

From a German perspective, the Grand Prix was interesting as Michael Schumacher made his Formula 1 debut. In the defeated Jordan he qualified for seventh place on the grid. However, due to a technical defect, he finished the race on the first lap.

A total of 16 of the 26 riders who started reached the finish.

Mansell was disqualified for a repair outside the permitted area of ​​the pit lane.

In total, 17 of the 26 riders who started reached the finish.

Gerhard Berger, who started from pole position, retired on lap 33 of the race with problems with the engine valves.

In total, 17 of the 26 riders who started reached the finish.

The Japanese Grand Prix in Suzuka took place on October 20, 1991 in dry weather and covered a distance of 53 laps (310.792 km). Ayrton Senna secured his third driver's title early because his only remaining World Championship rival Nigel Mansell was eliminated in the early stages after a driving error.

A total of eleven out of 26 drivers reached the destination.

The Australian Grand Prix in Adelaide took place on November 3, 1991 in heavy rain and was canceled prematurely after 14 laps (52.920 km). It was the shortest Formula 1 World Championship run of all time.

In total, 20 of the 26 riders who started crossed the finish line.

The world champion is the driver or designer who has accumulated the most points in the world championship by the end of the season. The six first-placed drivers in each race received points according to the following scheme:

When distributing points, the placements in the overall result of the respective race of all races are taken into account. The last race of the season in Australia was only rated with half the number of points due to the premature termination after less than 75% of the regular race distance.

Race of the Formula 1 World Championship 1991