Start-finish straight at a DTM race at the Hockenheimring 2018 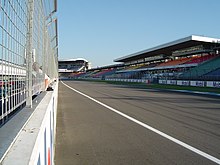 View from the pit wall to the start and finish

The subsequently added extension of the south stand

The Hockenheimring Baden-Württemberg (formerly Hockenheimring , Kurpfalzring ) is a motorsport racetrack in the Electoral Palatinate city of Hockenheim south of Mannheim . It is located in the western Schwetzinger Hardt .

The original route was laid out in 1932 within just three months as an approximately 12 km long triangular course on the unpaved forest trails in the Hardtwald; Among other things as a test track for Mercedes-Benz , but also as a race track, because the Karlsruhe Wildlife Park race track, which had been in use since the 1920s, could no longer be used after an official ban. The planning for the construction goes back to an idea of ​​the assistant timekeeper Ernst Christ and the commitment of the Hockenheim motorcycle driver club founded in 1931. ADAC and AvD had been approached as possible organizers, but had canceled, the Southwest regional group of the DMV took the opportunity and agreed in December 1931.

At the opening race for motorcycles on May 29, 1932, 60,000 spectators were counted. The winners were Arthur Geiss on DKW cc in the class to 250 and the Briton Tom Bullus at NSU in the 500 cc category. In the first years up to the spring of 1935, the 4.50 m narrow route had no tar cover for cost reasons and was bound with water between the runs to reduce dust.

On March 18, 1938, construction work began to shorten it to 7.725 km. The track was widened to 7 m and the curves to 9 m with 2 m safety strips each and the surface was sealed with a continuous, non-slip macadam covering. The newly created east curve had 8% cant . In addition, natural grandstands had been raised along the entire route.

The newly built Kurpfalzring was reopened on October 16, 1938 with a championship run for motorcycles and sports cars. This also became the last racing event before the Second World War . The new route essentially consisted of a hairpin in the village of Hockenheim, the city curve in the west and a high-speed route in the forest with a large curve, the east curve , then called the Radbuckelkurve . Today there is an operating building of the Hockenheim volunteer fire department on the former site of the city curve. Start and finish were on the southern straight through the forest; roughly at the height of today's Mercedes grandstand. In contrast to today, the course was used counterclockwise until 1963 . Meanwhile was Kurpfalzring established as a test track, as tested Mercedes-Benz their new in April 1939 Voiturette racing car W 165 attached to the new circuit and prepared here winning the Gran Premio di Tripoli before.

Because of the outbreak of war, the race planned for October 15, 1939 was canceled again. On September 14, 1941, the last race, a bike race, took place on the Kurpfalzring. Later, the track surface was finally destroyed by a nearby tank unit .

New beginning after the war

After the war, work was done at full speed on rebuilding the track, the organizational structures and the racing operations, and the new Hockenheim-Ring GmbH was founded on March 1, 1947 . Since then the ring has been called the Hockenheimring again . The very first circuit race in Germany was started on May 11, 1947 , 200,000 people had come to the Hockenheimring to see Karl Kling , Alexander von Falkenhausen and Toni Ulmen at the start. Almost a year later on August 8th / 9th By May 1948, 310,000 paying spectators attended the anniversary race.

The ex- NSU factory driver and world record holder Wilhelm Herz was managing director of the Hockenheimring from 1954 to 1992 and led it to international importance through the Grand Prix status for motorcycles and Formula 1. In 1972, Herz received the Federal Cross of Merit from Federal President Gustav Heinemann . Mainly motorcycle races were held, World Championship races mostly alternating with the Solitude in Stuttgart , but of course the Nürburgring was also a competitor. Herz later succeeded in securing the renovation and holding large car races.

Development since the 1960s

With the construction of the A 6 in the 1960s, the racetrack was cut up and the hairpin in Hockenheim was eliminated. The so-called Motodrom was built as a new western part from 1964 to 1965 , a stadium-like section with tight curves and a new pit area, which formed a strong contrast to the fast route in the forest. The total length of the course, which opened on May 22, 1966 and can now be traveled clockwise, was 6.789 km. With the new Motodrom, the Ernst-Wilhelm-Sachs-Haus was built beyond the pit lane, whose curved shapes on the upper floor and stairwell emulate the old S-shaped logo of the Fichtel und Sachs company .

The "short connection" or "cross bar" directly behind the inner stand created a route variant of 2.638 km in length. This “small course” is not used for Formula 1 , motorcycle or Superbike World Championship races, but is used by many other series. In addition to public drives, many automobile tests are also held on the small course. A copy was even built in Papenburg .

On April 7, 1968, two-time Formula 1 world champion Jim Clark had a fatal accident in a Formula 2 race with his Lotus when he probably hit a tree after a puncture. The route was then bordered with guard rails. Brake chicanes were added later, and the northern one near Clark's scene of the accident was named after him. The monument erected there was relocated after the renovation.

The Formula 1 circus made its first stop in Hockenheim in 1970 (winner Jochen Rindt ) because the drivers had boycotted the Nürburgring and its Nordschleife at short notice. Since this could not be rebuilt sufficiently safely later , the Grand Prix of Germany, organized by the AvD , took place in the Electoral Palatinate from 1977 (winner Niki Lauda ), with the exception of 1985, when the newly opened Nürburgring GP circuit was driven once. After Patrick Depailler's fatal accident during test drives in 1980, the fast east corner was defused by a chicane.

In 1992 the chicanes of the course were rebuilt, the Clark and Senna chicane were made a little slower. The east curve chicane was fundamentally rebuilt, it was now to drive right-left and both slower and more extensive.

From February 2002, the length of the former high-speed line was drastically reduced, and an enlarged south stand and the new Mercedes stand with a view of the north bend were built. A tight combination of curves in the northern area and a hairpin after the long Parabolika created new overtaking opportunities for the Formula 1 cars. In addition, the route should become more profitable: the addition of a further grandstand in the Motodrom at the level of the south curve and the construction of the Mercedes grandstand increased the audience capacity from 83,000 to 120,000; to show. Since the state of Baden-Württemberg contributed financially to the renovation, the official name has been Hockenheimring Baden-Württemberg since 2002 .

The 70-year-old former forest stretch was partially reforested after protests.

In the course of this conversion, the small course was also modified; At the end of the crossbar, a new chicane was created that greatly reduces the speed before turning onto the big track and, depending on the vehicle class, extends the overall lap times by up to 4 seconds. At 2.604 km, this route variant is slightly shorter than the still existing chicanery-free version.

As the renovation work cost more than 60 million euros, the entrance fees were increased accordingly, which prevented many spectators from continuing to visit the track for Formula 1 races. The construction costs could not be repaid, which drastically worsened the financial situation of Hockenheimring GmbH. In this context, an agreement had to be made at the end of 2006, stating that Formula 1 should alternate with the Nürburgring annually from 2007 when the German GP is held, as the Hockenheimring GmbH was able to make a profit in practically no race and through if the race continued to be held annually, the debt would grow even further. This contract was initially valid until 2010 and was then extended until 2018.

In the spring of 2004, an ADAC driving safety center (FSZ) was opened on an area of ​​around 11 hectares between the crossbar of the small course and the Mercedes grandstand . Up to the summer of 2018, 42 training programs for almost all types of vehicles were offered in six training modules. The site has meanwhile been built on by emodrom bau + grund GmbH.

Panoramic view from the south stand of the Motodrom (2004)

In October 2019, the building and the associated handling course were officially handed over to Porsche by emodrom bau + Grund GmbH. The Experience Center has an area of ​​around 180,000 m².

The so-called NitrolympX , a drag racing event where acceleration races are held, has taken place once a year since 1986 . For this purpose, there is a special straight line for drag races with a length of a quarter mile (around 402 m), which starts in the area of ​​the south stand and ends behind the Mercedes stand. A similar event is the Public Race Days, which will take place for the tenth time in 2014. In contrast to the NitrolympX, however, ordinary, street-legal cars and private drivers drive on the Public Race Days, who are also allowed to take part without a racing license for a fee.

In addition to the motorsport events, the Hockenheimring hosts large open-air concerts and running events. For example, in addition to the Hockenheimring race , the BASF Company Cup , which has been held annually since 2003 and with around 15,000 participants and 750 participating companies, is one of the largest events of its kind in Germany. During the warm season, the Hockenheimring is open to inline skates, skateboards, bicycles and the like at the "Fit on Track" event about once a month on a Tuesday evening from 6pm to 10pm. open. In June 2012, the organizer of the Rock am Ring festival announced that it was considering a change from the Nürburgring to the Hockenheimring, as neither the state of Rhineland-Palatinate nor the operator of the Nürburgring wanted to give binding commitments for the use of the festival site in 2013 . At the end of July 2012, however, the organizer of the festival and the then insolvent, state-owned Nürburgring GmbH agreed to keep the event site without setting an exact date for 2013. Instead, the Rock'n'Heim festival will take place on the premises.

All winners of Formula 1 races at the Hockenheimring 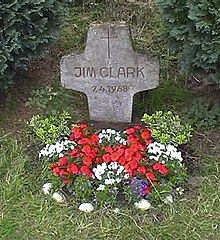 A plaque on the Hockenheim-Ring commemorates the two-time Formula 1 World Champion Jim Clark , who died in an accident on April 7, 1968 during a Formula 2 European Championship round. The actual site of the accident with a memorial stone is outside the race track, which was shortened in 2002, in the forest at the level of the former first chicane on the Hardtbach. There is also a small memorial there.

The Hockenheimring has an event radio that is operated on the FM frequency 92.4 MHz with 500 W ERP. The transmitting antenna is located 45 meters above the ground on a precast concrete tower.

Venues for the German Touring Car Championship and the DTM