Riccardo Gabriele Patrese (born April 17, 1954 in Padua ) is a former Italian racing driver . Between 1977 and 1993 he competed in the top motorsport class, Formula 1, for well-known teams such as Brabham and Williams . Patrese won six grand prizes and was runner-up in 1992. Until 2008, with 256 Grand Prix participations, he was the driver with the most starts in Formula 1, before being surpassed by Rubens Barrichello .

Patrese 1979 with his Arrows A1 in Imola

Patrese started karting as a child , becoming European team champion in 1973 and world champion in 1974. In addition to studying political science, he continued his racing career.

Patrese rose to Formula 3 and in 1976 became European and Italian champions in this class. In 1977 he drove in Formula 2 and made his Formula 1 debut on May 22 of the same year at the Monaco Grand Prix in Don Nichols ' Shadow team , where he finished ninth. Because of his involvement in Formula 2, he could not contest all races, but at the Japanese Grand Prix in Fuji he scored his first world championship point.

His second year in Formula 1 was turbulent. Former members of the Shadow team founded Arrows and hired Patrese as drivers. The new Arrows FA1 turned out to be excellent and Patrese led the second race for the new team in the South African Grand Prix until an engine failure took him 15 laps to go. Second place in Sweden followed, but then the season turned negative for Patrese. Numerous voices criticized his extremely aggressive and sometimes reckless driving style. That summer, Shadow boss Don Nichols filed a lawsuit accusing Arrows of recreating his car. Arrows lost and had to build a new car that was nowhere near as competitive.

Finally, at the Italian Grand Prix in Monza, there was a mass collision that cost Sweden's Ronnie Peterson his life. Patrese was blamed for this under the leadership of Niki Lauda and James Hunt and banned for the next race at Watkins Glen , completely wrongly, as it turned out in the process years later, since the accident had been caused by James Hunt himself. This was a serious blow to Father's career and it took a long time to restore his reputation. Two weak years at Arrows followed, and it wasn't until 1981 that he made it to the top, including his first pole position.

In 1982 Patrese hired Bernie Ecclestone's Brabham team. In the course of the year, the powerful BMW turbo engines were used for the first time, although their reliability initially left a lot to be desired. After all, Patrese won his first Grand Prix, the turbulent Monaco Grand Prix, in which two drivers in front of him ran out of fuel on the last lap. In 1983 his teammate Nelson Piquet won the world championship, Patrese, on the other hand, was often deprived of top positions due to defects and could only win one race again. He switched to Alfa Romeo at the end of the year , but was unable to achieve any useful results in the following two years. What started with great expectations ended with Alfa’s withdrawal from Formula 1.

Patrese was now in a crisis and his further career seemed endangered. In 1986 and 1987 he returned to Brabham without achieving significant success until he was brought to Williams in late 1987 . This began its renaissance and the good test pilot played a key role in the resurgence of the Williams team, which had a new factory partner in Renault from 1989 . Although the transition year 1988 was rather changeable, in 1989 he finished third with numerous podium places and celebrated a double victory with Thierry Boutsen in Canada. In the end Patrese was third in the World Championship and was able to beat Boutsen, although he had won two races. 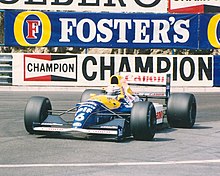 Patrese in the Williams FW14B at the 1992 Monaco Grand Prix

In 1990 Patrese won another Grand Prix after almost seven years, so that he stayed on board for 1991 , while Boutsen, although he had beaten Patrese on points this time, had to give way to Nigel Mansell . In the first half of the new season Patrese outshone the British against all expectations with two wins and four pole positions, but Mansell ultimately had to admit defeat on points and finished third in the World Cup. In 1992 Patrese was even runner-up in the superior Williams FW14B , but was clearly overshadowed by his team-mate, who dominated at will and won the world championship with the largest point advantage in Formula 1 history.

For 1993 , Mansell expected to stay with the team and repeat the 1992 success. However, in the summer of 1992, Frank Williams signed former world champion Alain Prost for the new season. Mansell, who found Prost to be at least an equal competitor and saw his chances of a second title threatened, then announced his resignation in the late summer of 1992. Williams thus lost a current world champion (in 1993 this was repeated with Prost). Williams then offered Patrese his second cockpit for 1993. At this point Patrese had already signed with Benetton , where he became teammate of the young Michael Schumacher in 1993 . Since he was there in the shadow of it, his contract was terminated at the end of the year, and so he left Formula 1 after 256 grand prizes.

After a few appearances in touring car and sports car races , where he had previously competed successfully for Lancia , his racing career came to an end.