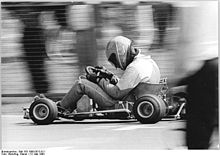 Karts on an outdoor karting facility

The kart (also go-kart ) is usually a single-seat, open vehicle equipped with an internal combustion engine or an electric motor , the design of which is based on pedal cars .

The first kart was built in 1956 by the American engineer Art Ingels - equipped with a lawnmower motor that drove a rear wheel via a bicycle chain. Ingels, who previously built racing cars at Kurtis Kraft , met with great interest with his invention. Imitators of the simple concept were quickly found and the first races were held in parking lots. As early as 1959, karts were shown at the Paris Motor Show and found their way to Europe.

In karting , which is held in various national and international racing series, karts can reach speeds of 60 km / h to 75 km / h, depending on the engine. Particularly powerful karts, the so-called super karts, reach top speeds of around 280 km / h. Besides the kart race on kart tracks, the version in Germany has Kart Slalom established as a popular sport.

Less proficient variants also offer laypeople and especially children the opportunity to be introduced to the sport. That is why karting was and is the entry point into motorsport for many racing drivers , including Michael Schumacher , Ayrton Senna , Alain Prost and Sebastian Vettel who started their racing careers on the kart track .

Especially after Schumacher's success in Formula 1 , karts also enjoyed great popularity as a recreational sport. There are numerous go-kart tracks (often also in halls) that allow non-racing enthusiasts to go karting. Because of the few safety precautions on the kart - only a few panels, usually no roll bar or belt - a helmet is usually mandatory there too. Professional kart athletes also wear the typical racing driver's clothing, consisting of overall, gloves, rib protection and, more rarely, neck protection.

The chassis of a kart consists of a round or oval tubular steel frame. Plastic panels are attached to the front and sides, and most racing series require a HAS (rear collision protection) at the rear. A rear wing can be attached to powerful karts. Since karts are not sprung, the frame must be able to absorb impacts without breaking or giving way too much. The rigidity of the chassis can be adapted to the track conditions by installing additional stabilizers.

Typically, the driver sits in the middle, in special designs for oval courses also offset. Two-seat karts are very rare. In offroad -Karts ( Kart Buggy ) are roll bar used in karting but largely abandoned. However, seats with rollover protection are required for Bambini karts (8–12 years).

The kart engine is located in front of the rear axle ( mid-engine ), usually on the side behind the driver. Originally, single-cylinder two-stroke engines from motorcycles were mainly used in karts , so most racing series also prescribe these engines. In the hobby sport in particular, four-stroke , rotary or electric motors are now also used, including exotic ones such as motors from ultralight aircraft with over 600 cm³.

As a rule, the engines in kart racing have a displacement of 60 to 250 cm³. Their power ranges from 4 HP (throttled, "Bambini") to around 100 HP for super karts . The speeds that can be achieved with it depend heavily on the selected gear ratio. Super karts can only reach speeds of 280 km / h if the course is suitable. The values ​​achieved by normal racing karts range from 100 to 170 km / h. Throttled karts (rental karts, Bambini) are designed for 65 or 35 down to 20 km / h.

Numerous manufacturers of racing or rental karts compete for technical progress. In the meantime, the electric drive, which has been developed for years, has become a mature alternative solution to the problem of increasingly stringent environmental protection requirements for noise and exhaust emissions. 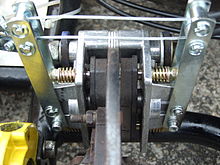 The power is transmitted from the engine to the rear axle via a chain. By changing the gears on the axle and on the engine, the gear ratio can be adapted to the track conditions, high-performance karts have three- to six- speed sequential gearboxes . In modern karts, a centrifugal clutch ensures that the engine does not go out when driving slowly or when stationary.

Since karts do not have a differential gear , a rear wheel has to slip when cornering. In order to reduce the resulting braking effect and the load on the slipping tire, the chassis is constructed in such a way that the rear wheel on the inside of the bend lifts slightly and thus loses grip.

Braking is done by a mechanically or hydraulically operated disc brake on the rear axle. Additional front disc brakes are also used, but are only allowed for gear karts (KZ, KZ2) and senior karts (IAME X30 etc.). The brake is operated with the shift kart with the left pedal and with the senior karts with a lever on the steering wheel.

Kart tires - usually tubeless, air-filled rubber tires - are significantly smaller than normal tires, the rims usually have a diameter of 5 to 6 inches. As in other motor sports there are slicks , rain tires and rarely intermediates , although only slicks and rain tires are allowed in races. Usually the air pressure is below a bar.

Although actually developed for the race track, there are also street-legal karts (also known as “street karts”). According to a directive of the European Union (2002/24 / EG: type approval for two-wheel or three-wheel and light four-wheel vehicles ), these karts are classified as small motorized vehicles and can therefore be approved for use on public roads. Since karts can easily reach top speeds of over 60 km / h, they can also drive on motorways. Street karts can be registered as light vehicles at a maximum speed of 45 km / h .

Since karts are difficult to see for other road users due to their low height and hardly guarantee passive safety , this regulation is controversial.