The karting (also Karting called) is the part of motor racing in which the racer with small, motorized vehicles called karts on special purpose-built kart tracks unsubscribe competitions. There is also the hobby variant, where anyone can hire a kart to pass the time on slopes, which are often located in halls (but sometimes also on real kart tracks). These have around 8-10 hp and reach a speed of around 80 km / h.

Due to their simple and light construction, karts are very fast and agile. They can reach speeds of over 150 km / h. Due to the low center of gravity only a few centimeters above the road, high cornering speeds are achieved in kart racing, which leads to a high level of physical strain (up to 4 g ). Go-karting is also practiced by children and young people. 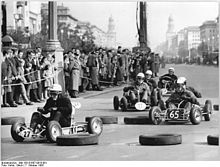 The first kart was built in 1956 by the American engineer Art Ingels and equipped with a lawnmower motor that drove a rear wheel via a bicycle chain. [1] Ingels, who previously built racing cars at Kurtis Kraft, met with great interest with his invention. Imitators of the simple concept were quickly found and the first races were held in parking lots. As early as 1959, karts were shown at the Paris Motor Show and found their way to Europe. In February 1960, the Go-Kart-Club Deutschland ( GKCD ) was founded by the Wiesbaden Automobile Club and cooperatively affiliated with the Automobile Club of Germany .

The first go-kart race on German soil took place in April 1960 in Wiesbaden. The first race in the GDR , with the karts known there, took place in November 1961 in a Leipzig exhibition center

A distinction is made between sprint and long distance series depending on the length and duration of the race. Sprint races are done by individual riders, while long distances are covered by teams. There is also the discipline of the kart slalom.

In sprint races, a certain number of laps are driven. The series with the highest ratings in Germany is the German Kart Championship . There is also a European and world championship organized by the world karting association CIK.

In the long-distance race, the participating teams drive for a predetermined time between 3 and 24 hours. In the end, the winner is the team that completed the most laps in that time. Driver changes are mandatory during the race. The kart also needs to be refueled regularly. The most famous long-distance series in German karting is the German Team Championship (GTC), which is held in three different divisions. Since 2011, the GTC has only been held in two divisions.

Since 2008, another long-distance series has been launched with the “AvD Kart Challenge”, which is now just as well known. In this class, however, all-round protection is used. Vehicles in this racing series are the Sodi RX 250 karts (1 cyl. 4T, 250 cm³, 22 HP), which are provided by the organizer X-Kart from Altendiez. Two races of three hours each are held on six racing days. The “sister series”, the AvD Kart Trophy 2010, has been at the start since 2010. This is absolutely identical to the AvD Kart Challenge, but will be held one day later, on Sunday. The two series were discontinued at the end of 2010.

Another, far less common karting discipline is the kart slalom . The participants drive one after the other on a course marked out by pylons. The driver receives penalty seconds for every drive around or out of the marking. In the end, the fastest driver won. However, this is done with low-powered four-stroke karts and harder tires.

The top German association in the field of karting is the Deutsche Motor Sport Bund eV (DMSB), which also organizes the German kart championship. He is both a member of the German Olympic Sports Confederation (DOSB) and a member of the World Automobile Sports Association Fédération Internationale de l'Automobile (FIA), which organizes the Kart World Championship through the Commission Internationale de Karting to FIA (CIK-FIA) .

There are a few kart clubs in Germany. One of the largest is the Kerpen-Manheim karting club. Drivers like Michael Schumacher and Sebastian Vettel come from this club. There are also indoor kart clubs. They organize their club championships on rented indoor go-kart tracks. The promotion of young people is seen as the most important measure in the clubs.

The ADAC , the AvD and the DMV are the three supporting associations of the DMSB and also the organizers of kart races.

In the international area, the CIK and the FIA ​​hold European and World Championships in the areas of OK, OK-Junior and KZ. The OK engines are identical to those of the German Kart Championship (DKM). In the area of ​​Rotax engines, a world championship-like concept is the annual Rotax Grand Finals .

In the KZ class, just like in the KZ2 and the German Shift Kart Championship (DSKM), geared motors are used. The only difference between the KZ class and the KZ2 class is that the KZ class is only allowed to be driven with a super license specially issued by the CIK / FIA and the regulations offer more scope for reworking the racing engines. Among other things, softer tires are used in the concentration camp.

One of the highlights of karting was the Monaco Kart Cup at the port of Monaco , which was last held in 2010. The race track led around Prince Rainier III's swimming pool. around, past the famous Rascasse restaurant and through the Formula 1 pit lane back to the port area. The track was 1078 m long and in 2005 it was the first time since 2002 to host a Monaco Kart Cup . There, as usual, CIK ratings in the ICA Juniors (today KF3) and Formula A (today KF1) classes were not held, but for the first time a so-called 4-stroke contest . It was driven with 250 cc 4-stroke engines from three different manufacturers who were there: Biland Kart-Power , Oral Engineering and Suter Racing Technology with their "Vampire" engine.

Preliminary remark: For racing events / racing series that refer to the CIK-FIA statute in their regulations, the age of the driver is based on the age group, i.e. H. the age does not have to be reached, it is sufficient if it is reached in the same calendar year.