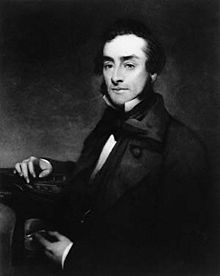 In the first decades of the 19th century, with the development of machine power, there was a need for effective propulsion of ships. The paddle wheel drive had weaknesses. Based on much earlier ideas as of Archimedes , were screw drives realized. The Austrian Josef Ressel had also offered the ship propeller he had developed to the British Admiralty after the Austrian Navy had refused any further cooperation with him regarding propellers. The British Admiralty also had doubts about this new drive. She later advertised a prize for the invention of the ship's propeller. This was won by the English farmer Francis Pettit Smith, who had been working with ship propellers for some time. Smith invented the propeller developed by Ressel a second time.

In 1836 Smith received his first patent on a propeller he had developed. During a test voyage in 1837 with the 34-foot-long Francis Smith , half of its catchy, wooden screw the length of two aisles broke out and the ship went noticeably faster with this 'defective' device. Smith built the next propeller similar to the broken one. It was a success.

Official test drives under the control of the Admiralty followed and it was concluded that a larger ship unit should be equipped with the Smith propeller. Smith then had the Archimedes built at his own expense in 1838 , a ship weighing 238 tons. All voyages were very successful and a race with what was then the fastest paddle steamer in the Navy, the Widgeon , was a complete success. In 1845 the HMS Rattler, equipped according to his plans with a screw propeller, finally won a sensational competition against the paddle steamer HMS Alecto , which meant that the entire Royal Navy was quickly switched to propulsion.

For his service Smith in 1871 to Knight Bachelor beaten.