Damon Graham Devereux Hill , OBE (born September 17, 1960 in London , England ) is a former British automobile racing driver and now a motorsport official. Between 1992 and 1999 he competed in the top motorsport class, Formula 1, and became world champion there in 1996 . As the son of two-time Formula 1 world champion Graham Hill , he is the first driver to win this title like his father. From 2006 to 2011 Hill was President of the British Racing Drivers' Club , the owner of the traditional Silverstone circuit .

Hill became known to the general public in the mid-1990s mainly through the ongoing rivalry with his German rival Michael Schumacher , against whom he lost two title fights. In addition to his achievements on the route, Hill gained recognition primarily from the British public - through his simple manner and his clear interviews, conducted with dry humor and wit.

Despite his famous family name, Hill had to fight hard for his promotion to Formula 1. After his father was killed in a plane crash in his private plane in 1975 and left the family in debt - the plane was uninsured because of a lawyer’s mistake and Hill’s family had to pay for the victims - Damon Hill's path to the top of motorsport was anything but mapped out. Hill's mother took a job as a secretary, and the family even had to sell the father's trophies. Hill himself worked as a motorcycle courier.

So Hill started his motorsport career on two wheels. From 1979 to 1984 he took part in motorcycle, off-road and road races and achieved 40 victories during this time. In the middle of 1984 Hill got into the Formula Ford 1600 and achieved his first victory at Brands Hatch in England . In 1986 he switched to the British Formula 3 championship . He got a place on the Murray Taylor Racing team and was ninth overall. From 1989 to 1991 Hill drove in Formula 3000 and from 1991 got a contract as a test driver with the Formula 1 team Williams .

Hill is the last F1 world champion who did not start his career in karting . Well-known multiple world champions with similar careers are Niki Lauda and Emerson Fittipaldi .

In 1992 he got a regular place in the British team Brabham, which had been very successful in Formula 1 until the mid-1980s, but in the early 1990s increasingly slipped to the end of the starting grid. Due to the lack of sporting success, the team found hardly any sponsors, was consequently chronically underfunded and could no longer pursue any noteworthy development. Hill was registered to eight races before the team had to file for final bankruptcy. Because of the non-competitive material, he was only able to qualify for two races (one of which was his home Grand Prix in Silverstone , England ), while his team-mate Eric van de Poele only took part in one race in ten attempts. After the Brabham team ended, Hill concentrated on his test driver work at Williams.

In 1993 , after the resignation of world champion Nigel Mansell, which was somewhat surprising for Williams, he became a regular driver and thus had the great opportunity to prove his skills in the Formula 1 team that was dominant at the time. Right off the bat, Hill finished third overall with three wins behind his teammate Alain Prost , who won the World Cup and ended his career.

In 1994 Hill went into the season at the side of Ayrton Senna , who, however, was tragically killed in the third race. Hill now had to lead the Williams team and after initial difficulties and a chase to catch up in the second half of the season, he finished second overall with a total of six wins - only just beaten by his rival Michael Schumacher on Benetton - Ford . Still, Hill was named BBC Sports Personality of the Year , UK Sportsman of the Year.

In 1995 Hill started a season together with Schumacher for the first time as a favorite for the title, but was again runner-up behind his German competitor, who this time also had Renault units in his Benetton. In 1996 the Briton finally managed to win the world championship with constant performance and a total of eight wins this season. He was again named Great Britain's Sportsman of the Year in the same year. Despite the successes, his contract with the Williams team was not extended, which met with great incomprehension among the British public - especially since he was replaced by the German driver Heinz-Harald Frentzen , who had not yet had any Formula 1 victories.

For the 1997 season he then moved to the previous backbench team Arrows after team boss Tom Walkinshaw had lured him with a million dollar contract. In Hungary, Hill managed the feat of leading the field for laps with the actually inferior Arrows- Yamaha - also helped by the Bridgestone tires, which were better in the heat - until a hydraulic system seal burst two laps before the end. He still saved second place; only Jacques Villeneuve , who won the World Championship for Williams after Hill's departure, overtook Hill on the last lap. Otherwise he only scored one more point in the season and finished 12th in the drivers' championship. 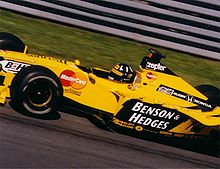 In 1998 he moved to Eddie Jordan's team after a move to McLaren-Mercedes had previously failed. The car was marginally better to drive at the beginning of the season than the Arrows of the previous year. But again Hill managed the unexpected: After a few further developments, he won the rainy Belgian Grand Prix in the second half of the season after the dominant Michael Schumacher in the Ferrari was eliminated after a collision. This was the first victory for the Jordan team, which even became a double triumph thanks to the second place of his team mate Ralf Schumacher . Hill finished the year in sixth overall. In 1999 he got Heinz-Harald Frentzen from Williams (who was once his successor there) as a teammate. Jordan built the best car in team history. But only Frentzen capitalized on it with two wins and third place in the world championship. Hill lost his motivation noticeably, collected a total of only seven points (compared to 54 of his teammates) and consequently ended his active Formula 1 career at the end of the season.

Damon Hill held the record for the fastest race lap ever driven for ten years (set up in Monza in 1993 with 249.835 km / h) and qualified for the front row of the grid in all races of the season in 1996, which apart from him only Ayrton Senna (1989 on McLaren Honda ) and Alain Prost (1993 in Williams-Renault) succeeded. 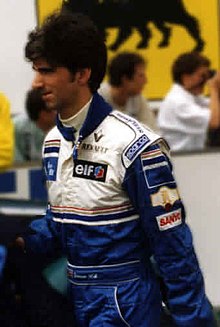 After Ayrton Senna died in an accident at the beginning of 1994 , Hill and Schumacher emerged as the legitimate successors who should fight for the world championship. The unequal pilots, separated by an age difference of eight and a half years, regularly clashed on the track and fought various duels. Here is a selection of the most famous scenes:

After the end of his active career, Hill began to get involved in British motorsport and in 2006 rose to replace Martin Brundle as President of the influential British Racing Drivers Club (BRDC), which, among other things, hosts the British Formula 1 Grand Prix .

Damon Hill was born in the late summer of 1960 in the London borough of Hampstead as the son of racing driver and future F1 world champion Graham Hill and his wife Bette. Hill has two sisters, Samantha and Brigitte.

At the age of 15, Damon Hill lost his father in a tragic accident. The family's previously comfortable living conditions changed drastically, and Hill financed his training with temporary jobs (including as a motorcycle courier for a London pizza delivery service).

The helmet design is based heavily on his father's helmet.

Hill adopted his helmet design from his famous father, using dark blue instead of black. The helmet pattern with the white oar blades on a dark background corresponds to the coat of arms of the London Rowing Club , of which Graham Hill was a member.

Hill has been married to Georgie (* 1961) since 1988 and they have four children together. Their first son was born with Down syndrome . The couple is therefore involved in this area, for example by providing financial support to the relevant foundations. In 2003, Damon Hill commented on the Special Olympics Summer World Games in Dublin for British television. Hill described his personal situation in 2002 as follows:

“My first son, Oliver, who is now 13, was born with Down syndrome, so it's something that affects me very much. I want to bring this fact closer to people. Oliver enjoys a great life, he is an important part of our family and I want to support the foundation. "

In the late 1990s, Hill appeared together with the English reporter legend Murray Walker as an advertising character for the fast food chain Pizza Hut . In the funny spots, Hills Image was caricatured as eternal runner-up, as was Walker's urge to comment on every step of a British racing driver.

Hill takes part in the Gumball 3000 race, which is illegal and highly controversial in Germany . This is a rally across Europe with exclusive sports cars and prominent participants.

In addition to his sporting ambitions, Hill also has a musical streak. As a passionate guitarist , for example, he often performed at Formula 1 events with former colleagues or team members. The English hard rock group Def Leppard invited Hill in 1998 to record their album Euphoria , on which the racing driver recorded a guitar solo ( Demolition Man ).

In order to cope with the grief for his father and the anger over the no fault of his family, Hill founded the punk band "Sex, Hitler and the Hormones" with a few school friends during his school days. Between 1999 and 2003 he had a band called "The Conrods". In their repertoire were mainly cover versions of well-known bands such as The Rolling Stones , The Beatles and The Kinks . With her he appeared at the 2002 Austrian Grand Prix on the A1-Ring . He has given up playing the guitar since he was BRDC president.

Statistics in the Formula 1 World Championship