Bad Bellingen is located in the Upper Rhine Plain , directly on the Rhine and thus on the border with France and in the Markgräflerland on the edge of the southern Black Forest . The closest cities are Müllheim about 10 km north and Lörrach about 15 km south. Mulhouse, located in France, is about 18 km west of Bad Bellingen. 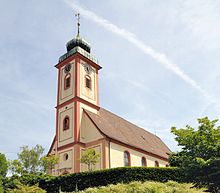 An elevator connects the upper town and the spa district

Bad Bellingen emerged from an Alemannic settlement courtyard. Over time, this developed into a small farming hamlet called Bellikon, which was first mentioned in 1006 in a document from King Heinrich II . Over the centuries this settlement developed into the fishing and winegrowing village of Bellingen. From 1418 to 1805, the place belonged to the Barons of Andlau and thus to Upper Austria until it fell to the Grand Duchy of Baden in 1805 due to the Peace of Pressburg .

During the Second World War, Bellingen was about 40% destroyed. In the 1950s, the construction of the Rhine canal, which had begun in 1928 and was interrupted due to the war, was continued on the Alsatian side, which led to the desertification of large areas in the lowlands of the municipality.

In order to improve the economic basis of the community, test drilling for oil began. Instead of the expected oil, however, on November 28, 1956, one of the meanwhile four thermal springs were encountered , as they are also found in other places in the Upper Rhine Plain ( Badenweiler , Bad Krozingen , Freiburg im Breisgau , Baden-Baden ). They are sodium-calcium-chloride thermal baths with temperatures of over 35 ° C: since 1956 the Markus spring with 36 ° C, since 1972 the Leodegar spring with 35.5 ° C and since 1974 the Eberhard spring with 40.7 ° C. The first hot tubs were wine tubs. This is how the community became a spa and since October 14, 1969 it has been known as Bad Bellingen with the official addition of Bad . The health resort and vacation activities became a determining factor in the community. Until 1972 Bad Bellingen belonged to the district of Müllheim , after its dissolution the community moved to the district of Lörrach. The current community was formed on January 1, 1975 by the union of the communities Bad Bellingen, Bamlach, Hertingen and Rheinweiler.

The thermal baths now include three thermal pools, a water treading facility, a sauna area with five saunas, a steam bath, a hot water pool, a relaxation area and a separate “grotto” with natural salt from the Dead Sea , in which 45-minute sessions at a humidity of 25% and a temperature of 21 ° C is said to be beneficial for health in diseases of the upper respiratory tract and nervous disorders.

The monumental steel sculpture in front of the thermal baths by Erich Hauser was donated by its original owner Franz Mary on June 14, 1992 for his hometown Bad Bellingen according to a plaque.

On July 21, 1971, the D-Zug 370 «Schweiz-Express» from Basel to Copenhagen derailed in a curve in Rheinweiler at 1:10 p.m. and fell down the embankment , completely destroying a single-family house. 23 people were killed, 121 injured. Presumably due to the engine driver's incapacity to work, the speed of 75 km / h allowed in the curve was clearly exceeded by around 140 km / h. As a result of this accident, the then German Federal Railroad equipped slow speed points with punctual train control and the reaction times of the safety driving circuit (SiFa) were shortened. As a result of this accident, the Federal Court of Justice came to a ruling that is considered fundamental with regard to the railways' traffic safety obligations.

St. Peter and Paul in Bamlach 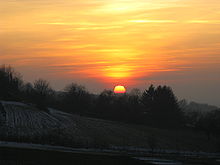 View of the Rhine and France

The quiet holiday resort of Bamlach with no through traffic was founded in the Middle Ages (mentioned in 1130). Like Rheinweiler, Bamlach belonged to the barons of Rotberg from 1417 to 1805 . It is surrounded by vineyards and fruit trees. The main cultural and historical attraction is the Upper Rhine Bath Museum (established in 1991), which documents the history of thermal baths north of the Alps from Roman origins (Therme Badenweiler) to modern times. An outstanding exhibit is one of the large wine tubs that were used as a bath tub in the early days of the Bad Bellingen spa business (1956).

The tourist infrastructure is in a campsite, apartments and an apartment complex on Golf - Resort with the two 18-hole courses Quellenhof and Kapellenberg .

The Kapellenberg is named after the pilgrimage chapel Maria Hügel , which was built in 1866 over a free-standing, older statue of the Virgin Mary. It was destroyed to the ground in 1945 and rebuilt in 1952. The original statue of the Virgin Mary, which was also destroyed, has been replaced by a new wooden sculpture. From this hill there is a wide view of the Rhine plain and, in clear weather, as far as the Vosges to the Hartmannswillerkopf .

Bamlacher Chapel Hill is also a vineyard, in the mainly white and Pinot Gris , Muller-Thurgau and Pinot Noir is hammered.

The local election on May 26, 2019 in Bad Bellingen with the following final result. The turnout was 52.79% (2014: 45.6%). The municipal council consists of the elected voluntary councilors and the mayor as chairman. The mayor is entitled to vote in the municipal council.

The coat of arms for the new municipality of Bad Bellingen, formed on January 1, 1975, was awarded on December 8, 1978 by the Lörrach District Office. Blazon : “In a shield divided by a silver wave bar, a split silver fountain rising from the wave bar above, in green, a stylized golden grape below.” While the fountain symbolizes the health resort, the grape stands for viticulture in the village and the wave bar in the middle represents the Rhine.

Until December 31, 1974, the municipality of Bellingen (Bad Bellingen since 1969) had a different coat of arms. Blazon "In gold on a green shield foot a blue-clad, bearded soldier with a blue cap, red vest, red stockings and black shoes, in the raised right hand a red sword, the left hand waved in the side."

A community partnership exists with the

The water from the hot springs has a high CO 2 content and a very high mineral content. Therefore, the Bad Bellinger water is proven to be one of the most effective healing springs in Europe. The thermal baths also have a drinking fountain, five saunas with different temperatures and a Dead Sea salt grotto. The water of the thermal baths is particularly suitable for back and joint problems.

The history of the baths is documented in the Upper Rhine Baths and Local History Museum in the Bamlach district. There are also local history departments and special exhibitions.

In the otherwise agricultural community, the spa and spa business with the Balinea thermal baths in the center has meanwhile become an important economic factor. Over 2000 guest beds are available for the 350,000 overnight stays each year.

The Rheintalbahn ( Mannheim - Basel ) connects Bad Bellingen with the Bad Bellingen stop and the Rheinweiler train station to the national rail network. The closest ICE stops, which can be reached every hour by regional train, are Basel Badischer Bahnhof in the south and Freiburg im Breisgau in the north.

West of the municipality is the federal motorway 5 with the Bad Bellingen motorway service station (in the direction of Basel). The next connection points are Efringen-Kirchen in the south (approx. 8 km) and Müllheim / Neuenburg in the north (approx. 6 km). Bundesstrasse 3 (Freiburg-Lörrach) runs near the Hertingen district .

The Euroairport Basel Mulhouse Freiburg can be reached in around 20 minutes by car.

The primary school is based in Rheinweiler. There are also three municipal kindergartens.

Personalities related to the community