Rümmingen ( Alemannisch Rümmige ) is a municipality in the district of Lörrach in Baden-Württemberg . Apart from the village of the same name, no other localities belong to the municipality of Rümmingen. The place is a member of the community administration association Vorderes Kandertal based in Binzen .

Rümmingen is located in the extreme southwest of Germany in the Kandertal in the Markgräflerland , about 6 km from the Swiss and 7 km from the French border.

The community borders in the north on Schallbach and Wittlingen , in the east and south on the city of Lörrach and in the west on Binzen .

Rümmingen was first mentioned in the year 767 as Romaninchova in a purchase agreement with which the village at that time was sold to the monastery of St. Denis near Paris together with six other villages . In the following years the place is mentioned in documents under various forms of name [Romaningahoba (790), Romaninchoven (1064), Rümikun (1310), Rümichon (1321), Rümikon (1344)]. The name is traced back to a person named Roman.

Rümmingen also suffered losses in the Thirty Years War , which were partially offset by influx from Savoy and the Valais . During the Dutch War , the village was burned by French troops in 1676.

Politically, Rümmingen was a "branch" of the Binzen community until 1750. After Rümmingen had already made an advance in 1726 to obtain its own ban , it was not until a contract dated July 6, 1750 that its own district was separated from the previously common ban with Binzen.

Rümmingen also belonged to the parish until 1989 . From 1989 to 2012 there was its own parish, since 2013 there has been a joint Protestant parish again with Binzen. Before the Reformation , the parish of Binzen-Rümmingen belonged to the Diocese of Constance . In 1503 the diocese of Basel bought the patronage rights over the Binzen church. In 1505 the Rümmingers built their own house of worship; the Gothic chapel on Dorfstrasse still stands today and is one of the oldest buildings in the community.

In 1740 Rümmingen hired its first teacher . In 1835 the community built its own school, today's town hall. In 1964 the new building of today's primary school was inaugurated and in 1994 two classrooms were added.

The age of industrialization began in Rümmingen in 1861 with the construction of a brick factory , which was profitable thanks to the Kandertal Railway, which opened in 1895 . In 1967 the brickworks were taken over by Tonwerke Kandern, which shut down operations in Rümmingen in 1993.

Today Rümmingen is an agricultural and craft town. After the end of the Second World War , building activity began and the number of inhabitants rose from 400 to more than 1,600.

Historic village center, in the background the Hochblauen

The local council in Rümmingen has ten members. It consists of the voluntary councilors and the mayor as chairwoman. The mayor is entitled to vote in the municipal council. In the local elections on May 26, 2019, the local council was elected by majority vote. Majority voting takes place if no or only one nomination has been submitted. The applicants with the highest number of votes are then elected. The turnout was 65.4% (2014: 51.4%).

In January 2016, Mayor Daniela Meier was re-elected for a second term. For certain administrative tasks, the community has joined the community administration association of the Vorderes Kandertal based in Binzen.

Blazon: In a split shield above in gold a growing, double-tailed red lion, below in silver on a green three-hill a green-leafed apple tree with red fruits and a black trunk.

The red lion represents the centuries-old connection to rubella , the apple tree symbolizes the importance of agriculture for the place. 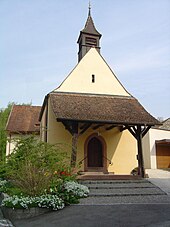 The oldest nature reserve in the district, the Rümminger Moos, is located in the municipality . There is also the natural monument "Ziegelei-Grube Rümmingen" .

Rümmingen is a good one kilometer from the Kandern exit of the A 98 and is therefore very well connected to the trunk road network. Rümmingen is connected to Lörrach in the south via the county road (K 6354) and the Lucke pass crossing ( 366  m ).

The summit of the Wittlinger Bucks ( 437  m ) belongs to the Rümmingen district, although it is only accessible from Haagen and Wittlingen .

There is a primary school in Rümmingen , secondary school students attend the school in Binzen. Realschulen are located in Kandern and Weil am Rhein as well as in Lörrach , where there are also several grammar schools . There is a communal kindergarten in town for the youngest residents .