from Wikipedia, the free encyclopedia
Fighting in the course of the Baden Revolution of 1848/49

The Baden Revolution of 1848/1849 is understood as the regional course of the revolutionary unrest in the Grand Duchy of Baden, which encompassed almost all of Central Europe .

As part of the bourgeois-liberal “ March Revolution ” in the states of the German Confederation , the revolution in Baden, southwest Germany, was largely driven by radical democratic influences: It sought a Baden - in the overarching context also German - republic under the sovereignty of the people and directed against the rule of princes .

Its high points were the Hecker uprising in April 1848, the Struve Putsch in September 1848 and the civil war-like uprising, also known as the "May Revolution", as part of the imperial constitution campaign from May 1849. The revolution ended on July 23, 1849 with the military Suppression of the last uprising and the capture of the Rastatt fortress by federal troops under Prussian leadership. 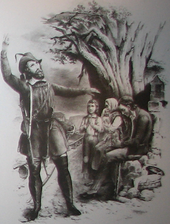 Transfigured picture of Friedrich Hecker (1811–1881), standing on the left

With the Hambach Festival in 1832, the tendencies of the Vormärz became apparent. One of the participants in the Hambach Festival was Johann Philipp Becker . After the outbreak of the February Revolution in Paris in 1848 and the proclamation of the Second Republic in France, the revolutionary spark first spread to Baden before revolutionary unrest and uprisings broke out in other states of the German Confederation . 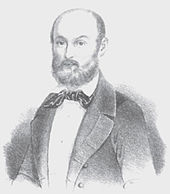 The German March Revolution began not only in Baden, but also ended here when the Rastatt fortress was captured by Prussian troops on July 23, 1849, as the last bastion of the revolutionaries.

The Baden Revolution took place in two phases: between the beginning of March 1848 and September 1848 there were two attempts to establish a republic from southwest Germany with the Heckerzug and the Gustav Struve uprising in Lörrach .

Four revolutionary platoons started in the second half of April. The Hecker train from Friedrich Hecker from Konstanz from 13. – 20. April 1848, which failed in the battle on the Scheideck near Kandern . The Sigel train from Konstanz from 15.-24. April 1848, which was defeated in the battle at Günterstal on April 23rd and in the assault on Freiburg on April 24th, 1848. The Weißhaar-Zug from Jestetten from 17. – 20. April, which ended on April 20th in Steinen (Baden) . The Herwegh train from Kleinkems am Rhein from 24.-27. April 1848, which went down in the battle near Dossenbach . With the defeat of Friedrich Hecker and his followers near Kandern and his flight into exile, as well as the arrest of Gustav Struve in September, this first phase came to an end.

The second phase began - after the rejection of the Paulskirche constitution by most of the royal houses of the German Confederation - with the May uprisings of 1849, which were an attempt to implement it not only in Baden but also in other German states (especially in the Bavarian Rhine Palatinate ) to enforce the constitution ( imperial constitution campaign ). This second phase ended in Baden with the suppression of the revolution after the last fighting in July 1849 in Rastatt.

In contrast to the other surveys in the German Confederation, it was characteristic of the Baden Revolution that the demand for a democratic republic was most consistently represented in it. In contrast, the committees and revolutionary parliaments of the other principalities of the German Confederation largely favored a constitutional monarchy with a hereditary empire .

Radical democratic and early socialist revolutionaries were strongly represented in Baden. Some of the most prominent figures were Friedrich Hecker, Gustav Struve and his wife Amalie , Gottfried Kinkel , Georg Herwegh and his wife Emma . Furthermore, Wilhelm Liebknecht , who at that time was still relatively unknown co-founder of the Social Democratic Workers' Party (SDAP), the forerunner of the SPD (Social Democratic Party of Germany), was involved in the uprising in Lörrach in September 1848 and in May 1849 as Adjutant Struve's participant in the Baden Revolution. The socialist Friedrich Engels , who wrote during the March Revolution for the " Neue Rheinische Zeitung " published by Karl Marx in Cologne , also took an active part in the struggles against counter-revolutionary Prussian troops in the final phase of the Baden Revolution in 1849 . Finally, the couple Fritz and Mathilde Franziska Anneke from Cologne also joined the Baden militants.

The popular associations founded in many places formed the basis of the revolution in Baden .

The following table shows the connections between the revolution in Baden, the processes in the German Confederation and in Europe, as far as these are described in Wikipedia.

Timeline of the Baden Revolution

Flyer dated September 1847 with the “demands of the people”, the goals of the radical democrats formulated at the Offenburg assembly

Map of the area affected by the April uprising in 1848 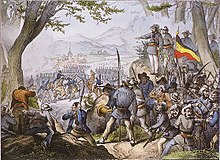 Contemporary lithograph of the battle near Kandern from the perspective of the revolutionaries on April 20, 1848, during which the Hecker uprising was suppressed

Caricature on Grand Duke Leopold's flight from Karlsruhe on the night of May 13-14, 1849

The revolution had failed. The Baden army was dissolved and later rebuilt under Prussian leadership. Many revolutionaries managed to escape into exile, including Struve, Brentano, Carl Schurz , Friedrich Engels, Friedrich Beust , others were arrested and tried before court courts with Prussian-Baden occupation. After the fall of Rastatt, the Prussian commando assigned Karl Alois Fickler , the brother of the Baden agitator Joseph Fickler , to defend the defendants. The court courts sentenced 27 revolutionaries to death by shooting (including the last commandant of Rastatt fortress, Gustav Tiedemann) and imposed long sentences on others in Prussian prisons. Typhus broke out in the casemates of Rastatt, where many revolutionaries were imprisoned, and claimed many victims.

Surrender of the revolutionary occupation of Rastatt to the troops of the German Confederation on July 23, 1849

19 death sentences were carried out in Rastatt. Otto von Corvin , who was also sentenced to death, was pardoned and his sentence was converted into a prison sentence.

The Rastatt trader and banker Franz Simon Meyer recorded his observations of the trials and the executions in detail in his notes. In the trial of Theophil Mniewski, he even acted as an interpreter for the defendant and visited him in his cell the night before the execution.

Three revolutionaries were sentenced to death and shot in the Wiehre cemetery in 1849:

As a result, in addition to the professional shootings, there were also arrests and fines. The emigration of around 80,000 people from Baden (5% of the population), mainly to America, was due on the one hand to economic hardship, but also to some extent because of the failed revolution. The emigrants of this time are known as Forty-Eighters or " Forty-Eighters ". Baden remained occupied by the Prussian Army until 1851.

Grand Duke Friedrich I issued three acts of grace in which those involved in the revolution of 1848/49 were granted amnesty in a graduated procedure. On July 9, 1857, revolutionaries were pardoned with a term of no more than eight years; on December 1, 1860, this amnesty was extended to include those convicted with no more than twelve years' imprisonment. On May 9, 1862, the Second Chamber of the Baden Estates Assembly dealt without discussion with a proposal from the Petitions Committee that left an amnesty to the grace of the Grand Duke. On August 7, 1862, the general pardon took place, although there was still uncertainty for those affected due to the lack of implementing provisions. An interpretation of the act of grace in a rescript of the Ministry of Foreign Affairs of January 26, 1863 was described by Gustav Struve as "sham amnesty" and "humiliation". 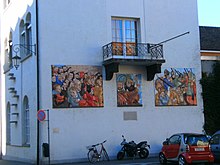 Konstanz: Picture by Johannes Grützke: Tomorrow we leave. Representation of Hecker in Constance

In Constance, a cycle of images by Johannes Grützke below the balcony commemorates Friedrich Hecker's appeal . Tombs commemorate the executed revolutionaries.

Monuments to the executed revolutionaries

In the old cemetery of Rastatt (today district hospital)

Friedrich Neff tomb in the cemetery in Rümmingen 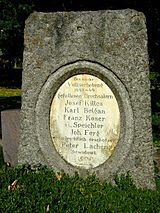