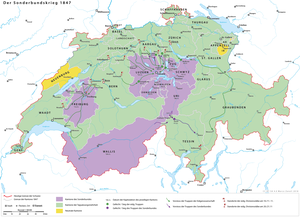 The Sonderbund War was a civil war in Switzerland . It lasted from November 3 to 29, 1847 and was the last military conflict on Swiss soil. As a result, the Federal Constitution of September 12, 1848 , united Switzerland from a federation to a federal state .

The reason for the war was the establishment of the Sonderbund by the conservatively ruled Catholic cantons of Lucerne, Schwyz, Uri, Zug, Obwalden and Nidwalden, Friborg and Valais. The aim of the League were the defense of the liberal tolerated stalls Freischar trains against conservativeruled cantons and the defense of the Catholic faith against the liberal, mostly Reformed cantons. Various ideas about the political and social order of the Confederation were expressed in the conflict: While liberals and radicals had been working towards the creation of a central federal state since the early 1830s, the conservative forces, which were particularly strong in the Catholic cantons, opposed a federal state as well the reference to the traditional sovereignty of the cantons.

As a result of the July Revolution of 1830 , the conservative power in Switzerland that was supposedly firmly established by the Restoration collapsed . In twelve cantons were during the regenerationreformed the constitutions in the spirit of the Liberals. As a result, the previously practiced consensus between church and state was in danger, since a central demand of liberalism was to subject the church to state control and, in particular, to reduce the influence of the church in education. This aroused resistance, especially in the Catholic, but also in the Reformed clergy. The Catholic Church tended to be more severely affected, as the cantons' interventions in church life represented direct competition with papal power. At that time the Catholics were said to have been controlled directly from Rome, and they were therefore referred to as " ultramontanes ".

On January 27, 1834, the cantons of Lucerne , Bern , Zug , Solothurn , Basel-Landschaft , St. Gallen , Aargau and Thurgau decided, after a conference in Baden that lasted from January 20 to 27, the Baden articles , to the state claims against the Catholic Church . In St. Gallen, however, the implementation failed in a referendum in 1835, and Bern also withdrew from the resolutions in 1835 due to the excitement in the Catholic Jura .

In Zurich there was a conservative-Reformed revolt against the liberal government when, in 1839, the author of the controversial theological work "The Life of Jesus, critically edited", David Friedrich Strauss , was appointed to the newly founded university September in the city of Zurich and forced the overthrow of the liberal and the establishment of a conservative government.

In Lucerne, which had previously been free-thinking, the ultramontanes led by Josef Leu and Constantin Siegwart-Müller achieved victory on May 1, 1841 in a constitutional revision that they initiated. Encouraged by this, they demanded from the Diet that the canton of Aargau be forced to restore the canton's monasteries , which had been repealed in the context of the Aargau monastery dispute in January 1841. Aargau resisted the decision, and when the Diet declared itself satisfied with Aargau's offer on August 31, 1843 to meet the aforementioned requirement only with regard to the four women's monasteries, the cantons of Lucerne , Zug and Uri united, Schwyz , Obwalden , Nidwalden , Wallis and Freiburg in September 1843 on the decision to separate from the Swiss Confederation if the Aargau monasteries were not fully restored.

Appointment of the Jesuits and free troops

The violent overthrow of the liberals in Valais by the ultramontanes and the appointment of the Jesuits to the higher education institutions in Lucerne increased the party hatred to the utmost and led to the political conflict between the liberal-radical and the conservative camp being strongly denominational. Because the ultra-conservative Jesuit order was controversial in Switzerland and was not only regarded by the liberals as a symbol of opponents of the Enlightenment and the influence of papal power, but also by the conservative Reformed. While there had previously been resistance against liberalism on their part (e.g. the Zurich coup mentioned above), they now saw a far greater threat in the Jesuits and therefore sided with the liberals. Even moderate conservatives had resisted the call of the Jesuits, which the ultramontanes had been demanding for years, in Lucerne. Trusting in free troops from other cantons, the Lucerne radicals tried with a first "free troop move" on December 8, 1844, to eliminate the clerical government by force; the enterprise failed miserably and was used by the conservative forces to destroy their opponents through incarceration, banishment and confiscation of goods. Likewise, there was a second attack by rioters under the former Lucerne government councilor Jakob Robert Steigerand Ulrich Ochsenbein from Bern in Lucerne bloodily rejected on March 31, 1845; 104 militants were killed while fleeing and around 1,800 captured. Among the prisoners was Steiger, who was sentenced to death but managed to escape from custody.

The fear of further free marches as well as the murder of the conservative politician Josef Leu by a conservative farmer prompted the conservative cantons to conclude a formal alliance in December 1845 and to organize it militarily in order to oppose unlawful resolutions of the daily statute that opposed the federal treaty of 1815 , who guaranteed the existence of the monasteries.

In addition, the conservative cantons feared interference by a liberally governed federal state in their previous competencies. The mood in the Catholic people was further fueled by politicians and priests when it was announced that the Catholic faith was being threatened by the liberal cantons. In central Switzerland in particular, the population drew a parallel to the bloody French invasion of 1798 and feared the worst.

As soon as the existence and the content of the alliance, which was initially kept secret, became known, in the summer of 1846 Zurich applied to the Diet to declare the Sonderbund dissolved in accordance with the Federal Treaty. However, the motion only received the required majority of the cantons' votes after the liberal party came to power in Geneva and St. Gallen in July 1847 . In addition, a revision of the federal treaty and the expulsion of the Jesuit order from Switzerland were decided. As the seven Sonderbund cantons, on Austria and FranceTrusting help, all reminders and mediation attempts remained inaccessible and eagerly prepared, the Diet of Berne decided on November 4, 1847 to use armed force. Although the violent dissolution of the Sonderbund, based on the federal treaty that emerged from the conservative zeitgeist in 1815 , had a shaky legal foundation, the liberal cantons were not prepared to allow themselves to be tied into this legal corset.

International environment of the conflict

The three conservative great powers in Europe as well as France supported the conservative-Catholic forces of the Sonderbund politically and diplomatically, in some cases also militarily and logistically: the Austrian Field Marshal Radetzky sent 3,000 rifles from Italy, which were intercepted in Lugano , and Austria also brought in troops Vorarlberg together. The French ambassador Bois-le-Comte , "in cordial agreement with his Austrian colleague," failed to do anything "that could strengthen and encourage the seven cantons," and France also tried to send arms. For Prussia and Russia the defense of any liberal endeavors was in the foreground, even if they did not intervene directly in the conflict for geographical reasons.

In contrast, Great Britain supported the liberal forces politically and diplomatically, because it was the insight of the British Foreign Minister at the time, Palmerston , “that the opposition to the absolutist governments is the lever and base of the power of England in Europe, its most reliable ally the general respect for freedom-seeking peoples ».

The federal staff during the Sonderbund War of 1847: the general and his staff

Former tombstone from Muri as a memorial in Geltwil

On October 30, the Diet decided to mobilize the troops of the cantons. The cantons of Appenzell Innerrhoden and Neuchâtel declared their neutrality and did not send any troops. The canton of Basel-Stadt gave up its neutral position on November 6th and placed its troops under federal command.

The acts of war began when the Sonderbund troops invaded Ticino on November 3, 1847 . On November 12th, another foray into Freiamt in Aargau took place. Both expeditions failed, however. In Ticino, the troops turned back after the death of their leading officers. In Freiamt, the Sonderbund troops met units of the federal army in the battle of Geltwil and in the battle near Lunnern - both meetings ended in general chaos without a decisive victory for the attackers.

The attack on Lucerne began on November 22nd. During these clashes, Dufour paid strict attention to compliance with humanitarian principles in the fighting. General Dufour's traditional principle was:

"We not only have to emerge victorious from this fight, but also without reproach."

This statement was a guiding principle for his subordinate commanders. The Sonderbund troops commanded by Johann Ulrich von Salis-Soglio were defeated on November 23 at Gisikon , Meierskappel and Schüpfheim , whereupon Lucerne capitulated and occupied on November 24. The other central Swiss cantons of the Sonderbund also decided to surrender the next day at a conference in Brunnen ; Valais was the last canton to surrender on November 29th. According to official information, the Sonderbund war cost the lives of 150 people and claimed around 400 wounded. 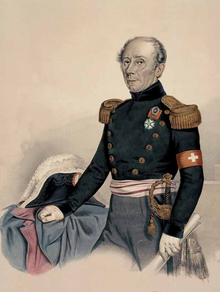 The constitutions and governments in the defeated cantons were revised in a liberal sense by the war winners. In addition, the losers had to pay the war costs through high reparation payments. The liberals, who came back to power in Lucerne, dissolved other monasteries in the canton to repay their debts.

A collective note from Austria , Prussia , France and Russia of January 18, 1848 stated, however, that these powers would not allow any changes to the Federal Act of 1815, which would conflict with the sovereignty of the cantons. The Diet, which was dominated by the victors of war, resolutely rejected this interference. The British Foreign Minister Lord Palmerston , who had already delayed the vote on the note among the great powers, had Dufour secretly say to put an end to it as soon as possible. Because this succeeded and also shortly afterwards due to the tense domestic political situation in France the February Revolution and then in the German states theMarch Revolution broke out, but there were no consequences.

The outcome of the war also decided the victory of the federal revision: the Diet decided in disregard of the revision rules in the current federal treaty (which for treaty changes, as is usual with a confederation of states, required unanimity or at least the validity of the changed regulations only for the approving states) according to the model of United States, the Federal Constitution , which still exists today in its basic features : After this change, Switzerland formed a more firmly established federal state without the right of individual cantons to withdraw from the loose confederation formed by the sovereign cantons.

The federal government was given the exclusive right to war and peace, international relations, customs , postal and coinage , measure and weight , the organization of the armed forces , higher military instruction, the guarantee of republican-democratic cantonal constitutions, political legal unity the freedom of belief, freedom of the press and freedom of association , etc.

The day's statutes were replaced by a federal assembly that was free to cast its votes and made up of representatives of the cantons ( Council of States ) and the Swiss people ( National Council ), while the previous changing suburb was replaced by a seven-person collegial authority, the Federal Council , as the highest executive authority ; a federal court was also set up.

Most cantons voted on the new constitution. In the canton of Friborg , the constitution was ratified by the Grand Council because it was feared that it would be rejected by the people. In the canton of Lucerne, the liberal government counted non-voters among its supporters and thus achieved an acceptance. This led to a clear result: the daily statute determined that 15½ cantons with 1,897,887 inhabitants against 6½ cantons with 292,371 inhabitants had adopted the new constitution. From the previously upheld principle of equality between the cantons, the Diet changed over to the majority principle , declared the constitution as adopted on September 12, 1848 and dissolved. The constitutional historian Alfred Kölz regards this procedure as "formally unlawful and therefore revolutionary".