Caricature of the so-called ostrich trade in Zurich in 1839

From 1821 David Friedrich Strauss attended the lower seminary (= grammar school) in Blaubeuren and from 1825 studied theology at the Evangelical Monastery in Tübingen . In 1830 he became vicar and in 1831 professorial administrator at the Maulbronn seminary ; but he went to the University of Berlin for another six months to hear Georg Wilhelm Friedrich Hegel and Friedrich Daniel Ernst Schleiermacher . In 1832 he was repetent at the Tübingen monastery and held philosophical lectures at the university at the same time.

At that time he caused an unheard of sensation with his book Das Leben Jesu, published from 1835–1836 . There, Strauss applied the principle of myth , which was founded in the field of ancient studies and was already used to explain Old Testament and individual New Testament stories, to the entire content of evangelical history, which he interpreted as the product of the early Christian community spirit , who unconsciously wrote according to the Old Testament Jewish image of the Messiah . The text, which is closely related to Hermann Samuel Reimarus in terms of content , nevertheless caused an unusual controversy. The replies formed a separate literature in which hardly a theological and philosophical name was missing. His answers appeared as pamphlets (1837).

On his distinction between the historical person of Jesus of Nazareth and the Christ of Faith, Martin Kähler and then Rudolf Bultmann et al. a. build up. Albert Schweitzer praised Strauss's “Life of Jesus” as scientific world literature: “Over fourteen hundred pages, and not a sentence too many”. The book "made him a famous man overnight (...) and destroyed his future."

For Strauss himself, his interpretation was first and foremost the consistent application of the Hegelian philosophy of Hegel. So the Son of God was not viewed as an individual human being, but as the idea of ​​humanity. Strauss then related the traditional doctrine of two natures to this critical definition . Jesus is said to be the infinite Spirit emancipating himself from his glory and the finite Spirit remembering his infinity. Under such a condition, Strauss could even accept the doctrine of Christ's supernatural birth, the resurrection and ascension and also the miracles as "eternal truths".

Strauss completely dispensed with the evidence on the basis of the sources, but opened up a new field for those who followed. For the Old Testament, the critical life of Jesus research was continued primarily by Julius Wellhausen . But Strauss' effect is only understandable if one looks at the Lutheran orthodoxy that had prevailed up to that point , which (like Ernst Wilhelm Hengstenberg ) rejected any criticism of the Gospel reports as “fraud” or “mental illness” - as would then happen to Strauss himself.

In the controversy surrounding Strauss' theses from The Life of Jesus , Hegelianism fell into two camps, the right-wing or old Hegelians , who took a stand against it, and the left-wing or young Hegelians who sympathized with it . Strauss, to whom this distinction goes back, would have been attributed to the left, which then culminated in the atheistic teachings of Ludwig Feuerbach's materialism and Bruno Bauer's “pure criticism”. Finally, the criticism that led Max Stirner in his book The Ego and Its Own (1845) to Bauer and Feuerbach exercised ( "Our atheists are pious people"), to be that Karl Marx of old bonds made freely and historical materialism conceived . The right, on the other hand, persisted in clearer eclecticism , which in the context of Strauss's work found its apologetic occupation in defending Hegel's philosophy against the accusations of orthodoxy. The central reproach of pantheism , however (which was overlooked), had already been dealt with by Hegel himself.

Strauss himself, who had been removed from his repetition position in 1835 and was transferred to Ludwigsburg as professorial administrator, but then soon switched to private status, moved further and further away from Christianity in the course of his life . In Stuttgart in 1839 the characteristics and reviews and the treatise on the transitory and permanent in Christianity were written . The third edition of the Life of Jesus (1838), which appeared to be characterized by a more conciliatory mood, was returned to its old radicalism in 1839. The reputation as professor of dogmatics and church history at the University of Zurich aroused such lively opposition, especially from the Antistes Johann Jakob Füssli , that Strauss had to retire before taking up his position with a pension of CHF 1,000. As a result of the " ostrich trade " in the Zurich coup of 1839, the liberal government of Zurich was overthrown.

His second major work, The Christian Doctrine of Faith, presented in its historical development and in the struggle with modern science, was published in two volumes from 1840 to 1841. It contains a sharp criticism of the individual dogmas in the form of a historical discussion of their process of creation and dissolution. The decisive and much-cited thesis of Strauss is: "The true criticism of dogma is its history."

On August 30, 1842, Strauss married the singer Agnese Schebest in Horkheim , whom he had met in 1836 during a guest performance in Stuttgart. The turbulent marriage caused quite a stir. The couple first lived together in the former Teutonic Order summer house in Sontheim , where a daughter was quickly born in May 1843. However, the relationship between the couple was broken from the start; As a result, Strauss moved into his own apartment in nearby Heilbronn in autumn 1843 ; the relationship with Schebest lasted for a few more years; the marriage even had a son in 1845. Around the turn of the year 1846/47, Strauss forbade Schebest, who was away from home, to return to the Sontheim apartment, which effectively resulted in the separation. In 1848, an agreement on child support payments also brought a legal end to it. In the same year Strauss also turned his back on Heilbronn. During his time there, he wrote a few small aesthetic and biographical articles in the contemporary yearbooks as well as in 1847 the small text The Romantic on the Throne of the Caesars, or Julian the Apostate , an ironic parallelization of the restoration of paganism by Julian and the restoration of Protestant orthodoxy by King Friedrich Wilhelm IV of Prussia.

In 1848 Strauss was nominated by his native city as a candidate for the German parliament, but was defeated. The speeches, which he had given partly on this occasion and partly before in various electoral meetings, appeared in the same year under the title Six theological-political popular speeches . When he was elected as a member of the city of Ludwigsburg for the Württemberg state parliament, Strauss, contrary to expectations, showed a conservative political stance, which even earned him a vote of no confidence by his voters, whereupon he resigned his mandate in December 1848. His later, partly in Heidelberg , Munich and Darmstadt , partly in Heilbronn (1860 to 1864 he lived there in Bläß'schen Palais ) and Ludwigsburg spent leisure came from the distinguished by solidity of research and beautiful display biographical work Schubart's life in his letters (1849 ), Christian Märklin , a picture of life and character from the present (1851), life and writings of the poet and philologist Nicodemus Frischlin (1856), Ulrich von Hutten (1858) (along with the translation of his conversations 1860); Herm. Samuel Reimarus (1862); Voltaire, six lectures (1870) and small writings with biographical, literary and art-historical content (1862), from which Klopstock's youth history etc. (1878) and Lessing's lecture Nathan the Wise (1877) appeared separately.

A new edition of the Life of Jesus "edited for the people" (1864) was translated into several European languages. Strauss rejected some of the new attacks against him in Die Halben und die Ganzen (1865), directed against Schenkel and Hengstenberg . The Christ of Faith and the Jesus of History, a critique of Schleiermacher's life of Jesus , also appeared in this context .

In his work The Old and the New Faith , published in 1872 , he already represented a monism influenced by materialism . When asked whether “we” were still Christians, he answered openly with “no”. Strauss did not see a religiosity aimed at the legally functioning universe, but considered it a legitimate alternative to the Christian belief in God. So, to a certain extent, he leaves the question of whether we still have religion open:

"If we are ultimately asked whether we still have religion, our answer will not be the flatly negative, as in an earlier case, but we will say: yes or no, depending on how one wants to understand it." (II)

There is some evidence that we still have religion, some against it. For this speaks z. B. that we still feel unconditionally dependent - regardless of whether we are talking about God or the universe. But we not only feel dependent, but also free - the feeling is a mixture of pride and humility, joy and submission. Clearly speaking against it is that we no longer have a cult and no longer see the world as “the work of an absolutely sensible and good personality”. Hence Strauss does not regret having left the Church. Because with the Church he has left behind the unbelievable and the contradictory. Nothing is missing from him either, but he still sees the need to profile a worldview that has been de-churched. An ethic must be designed that is independent of superhuman revelation. In contrast to this, the new worldview must build on the “recognized being of man”. This also addresses ideas of secularization. Strauss speaks of the "natural striving of our time to loosen the bond between state and church".

The book The Old and the New Faith was sharply attacked , among others, by the young Friedrich Nietzsche in his first “Out of Time Contemplation” (see literature ). Thus, shortly before his death on February 8, 1874, Strauss caused a stir in Ludwigsburg. Shortly afterwards, Zeller published his collected writings in 11 volumes (Bonn 1876–1878). A twelfth volume, Poetisches Gedenkbuch , then contained the poems of Eduard Mörike's childhood friend . The thumbnails were later published. 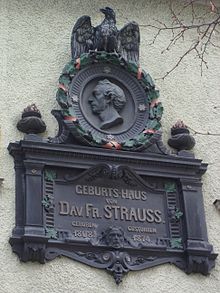 Memorial plaque on the house where he was born in Ludwigsburg

In 1883, a memorial plaque modeled by the sculptor Paul Müller with the dates of his life was attached to Strauss' birthplace at Marstallstrasse 1 . His grave is still in the old cemetery today . Furthermore, the northeast side of the obelisk on the Ludwigsburg wood market is dedicated to Strauss and shows his profile in a relief as well as his life data. There is a pavilion with his bust in the palace park not far from Emichsburg .