The logo for public relations of the canton of Jura

The Jura , French Jura [ ʒyˈʁaː ] ( abbreviation JU , Italian Giura , Rhaeto-Romanic Giura ? / I ), officially French République et Canton du Jura (Republic and Canton Jura), is a sovereign canton in French-speaking Switzerland , the francophone part of the Switzerland and belongs to the large region Espace Mittelland . The main town and at the same time the largest town is Delsberg (French Delémont ), the inhabitants are called "Jurassier" (from French Jurassiens ).

In terms of area, the canton ranks 14th out of 26, and due to its low population density, it ranks 20th in terms of population.

The official language of the canton is French . The only German-speaking community is Ederswiler . In 2012, French was used as the main language by 91.8 percent of the population, German by 7.2 percent and Italian by 2.9 percent.

Many places are known not only by their French but also by German names, such as Delémont / Delsberg or Porrentruy / Pruntrut , due to their proximity to the Franco-German language border and earlier changing affiliations first to the Principality of Basel and then to the Canton of Bern .

A clear majority of residents in the canton of Jura are Roman Catholic (69.6 percent). 10.1 percent profess to the Evangelical Reformed Church , while 12.1 percent are non-denominational .

The current cantonal constitution dates from 1977.

The legislative body ( legislative ) of the canton of Jura is the parliament (French Parlement ), which consists of 60 representatives of the people. It was last elected on October 18, 2015.

In addition, the people are directly involved in the legislation as constitutional amendments mandatory and legislative changes at the request of at least 2,000 voters or eight municipalities of the popular vote ( referendum subject). At least 2,000 people entitled to vote or eight municipalities can also apply for a change in the law or the constitution. Foreigners have passed since the foundation in 1979 Canton voting and entitled to vote; excluded from this is eligibility for election to cantonal offices.

See also : List of Ministers of the Canton of Jura

The executive body ( executive ) is the government (French government ). This consists of five ministers (Ministre) .

Judicial bodies ( judiciary ) are the judicial authorities. These include in particular the three district courts ( Tribunal du District ) as well as the cantonal ( Tribunal cantonal ) and the constitutional court ( Cour constitutionnelle ) .

Representation at the federal level

At the federal level, the canton of Jura sends two representatives each to the Council of States and the National Council .

Economically, the canton of Jura is one of the weakest cantons in Switzerland. The financial strength is only 30 percent of the nationwide value. In 2011, the gross domestic product (GDP) per inhabitant was 62,316 Swiss francs . This fact is also visible in the many vacant (and decaying) houses, some of which are historically valuable. The unemployment rate is above the Swiss average at 4.6 percent compared to 3.7 percent at the federal level (December 31, 2015).

A horse breed known today as Freiberger was formerly known as the "Jura horse". Overall, the Jura is a focus of horse breeding within Switzerland.

The Jura Railways ( Chemins de fer du Jura , CJ for short ) operate several railway and bus routes . The Swiss Postbus Service is also a concessionaire for several bus routes. The Swiss Federal Railways operate a main axis on which the express trains make a hairpin in Delémont. Another railway line runs from Delsberg to Boncourt with a continuation via Delle to Belfort . This route touches the Doubs valley with the Clos du Doubs .

The most important car connection is the A16 , which crosses the canton from south-east to north-west. Overall, some roads are narrow and winding, due to the sometimes spectacularly mountainous landscape. Some passages carved into the rock are no more than 3.1 to 3.5 meters high. This also explains the hesitant economic development of the area.

The Principality of Basel in the 18th century

The canton of Jura is the youngest canton in Switzerland. It came about due to cultural-political tensions . After several local plebiscites and the federal referendum of September 24, 1978, the northern part of the Jura was split off from the Canton of Bern on January 1, 1979 - after around 165 years of membership.

In the Middle Ages, the area of ​​what is now the canton of Jura belonged to the Principality of Basel , an episcopal territorial state. While the areas of today's Bernese Jura became part of the Reformation under the influence of the city of Bern in the 16th century , the northern part remained Catholic or was re-Catholicized during the Counter-Reformation. Since the Reformation, the prince-bishops no longer resided in Basel, but in Pruntrut in northern Jura in the Ajoie . Between 1579 and 1717 the prince-bishopric was allied with the Catholic towns of the Confederation. The southern Jura was considered part of the Swiss Confederation because the cities of Neuenstadt and Biel / Bienne as well as the Moutier-Grandval provost with Bern had castle rights . The bishop of Basel was then worldly considered a prince of the German Empire; therefore, a German military leader was allowed to place his troops in the diocese during the Thirty Years' War in 1639, without the Confederation being able to punish this as a border violation in their facing location.

In 1792, as a result of the occupation by French revolutionary troops, the Raurak Republic was briefly proclaimed in the northern part of the prince-bishopric . In the following year, however, the entire Jura became part of the French Republic.

At the Congress of Vienna in 1815, the areas of the former Principality of Basel were assigned to the cantons of Bern and Basel. The Birseck went to Basel, and the areas of today's Jura and the Laufental went to Bern. Compensation for the loss of Aargau and Vaud in 1803 was of secondary importance.

In the Catholic parts of the Jura there was already massive tensions between the authorities of the Canton of Bern and the population during the Kulturkampf in the 19th century . These tensions continued after the Kulturkampf into the 20th century, somewhat eased and later intensified again.

A highlight of the Jura question was the so-called Moeckli affair . In 1947 German-speaking Bernese politicians refused to run the building department to a Bern-Jura politician because it was "too important" to hand it over to a politician from Welsh.

The canton of Bern is largely reformed and German-speaking. In contrast, the majority of the inhabitants of the area acquired in 1815 are now French-speaking and - in the northern part - Catholic. The fact that the conflict that ultimately led to the separation of the Jura from Bern was originally less of a linguistic and more cultural nature, as shown by the fact that the La Neuveville administrative districts, the administrative districts of La Neuveville, were also French-speaking but Protestant in the referendums on the founding of the canton , Moutier and Courtelary , always voted to stay with Bern.

The founding of the canton was preceded by violent riots in the 1960s and 1970s. In 1984 the youth organization " Béliers " carried out explosive attacks . a. the soldier memorial of the First World War in Les Rangiers also fell victim. The leading head of the secession movement was Roland Béguelin from the Rassemblement jurassien .

The procedures foreseen in the Bern cantonal constitution and the federal constitution with referendums at various state levels ultimately prevented a civil war-like escalation.

In the second referendum on the Jura question on March 1, 1970, with an amendment to the state constitution, the Bernese electorate granted the seven Jurassic districts the right to decide on their own political future, and the Laufen district received the right to join another neighboring canton. The individual districts as well as communities at the district boundaries were able to vote on remaining with the canton of Bern.

The federal parliament approved the Jura constitution in September 1977, with the exception of Article 138, which provided for the possibility of incorporating all or part of the Jura that had remained Bernese - subject to a legally compliant replacement - to the new canton. On September 24, 1978, the Swiss people (82.3 percent yes) and all the cantons ratified the creation of the canton of Jura by approving an amendment to the federal constitution, thereby enabling its step into sovereignty on January 1, 1979.

On March 10, 1996, 91.7 percent of voters in Switzerland and all cantons made it possible for the small Bernese municipality of Vellerat to transfer to the canton of Jura because, according to opinion polls, they were primarily concerned with the right to self-determination at the municipality level . The German-speaking district of Laufen is Catholic, but the language led to the decision to stay with Bern at the time. Territorially separated from the remaining canton of Bern, the Laufen district changed to the Basel-Landschaft semi-canton in 1994.

The canton of Jura and secessionist forces in the southern Jura continued to agitate for reunification. Since 1994 the Interjurassische Assembly ( French Assemblée interjurassienne ) - a commission appointed by the Swiss Confederation with all interested parties - has been working on solving the Jura question. In September 2004 she started a project aiming at a completely new canton in which the northern Jura (today the canton of Jura) and the southern Jura (Jura bernois) are to be united according to the ideas of the northern Jura people. With this, another attempt was made to detach the southern Jura from Bern and thereby establish the "unity of the Jura people" desired by the canton of Jura and the separatist forces of the Bernese Jura .

History of the Labor Movement

The region is also of particular importance for the history of the labor movement . In 1871 several local sections organized in the First International - mainly watch workers - merged to form the Jura Federation . As a representative of a regionalist-collectivist anarchism , it was excluded from the International in 1872. The subsequent establishment of the short-lived Anti - Authoritarian International at a counter-congress in Saint-Imier made the region the European center of the anarchist movement in Europe for several years. Significantly, the idea for the Swiss women's strike in 1991 came from a number of women watch workers from the Vallée de Joux , who wanted to draw attention to their meager wages.

See also : Municipalities of the Canton of Jura

Cities and towns in the canton of Jura

The canton of Jura is very rural. The canton has 57 political communities . According to statistical criteria, there is only one city: the main town of Delsberg with 12'682 inhabitants.

The most populous political communities with more than 2,000 inhabitants as of December 31, 2018 are listed below: 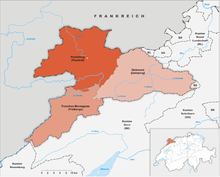 Districts of the canton of Jura

The canton of Jura is divided into three districts:

See also : Districts of the Canton of Jura