The Vallée de Joux is a completely closed high valley in the Swiss Jura . It is around 1000 m above sea level. M., coincides roughly with the area of ​​the La Vallée district and belongs to the canton of Vaud . The valley was first mentioned in a document in 1334 as valle lacus juriensis .

The Vallée de Joux extends over a length of around 20 km in a south-west-north-east direction. It has a flat valley floor, usually 1 to a maximum of 1.5 km wide, while the entire valley basin (with the adjacent slopes) is around 4 to 5 km wide. The valley forms a syncline which is flanked in the southeast by the folds ( anticlines ) of the Mont-Tendre chain , in the northwest by those of the Risoux chain . The north-eastern end of the valley is characterized by the Dent de Vaulion and the range of hills of the Col du Mont d'Orzeires , which were shifted to their current location by a shift in the leaves in the Jura chain system. In the southwest, the Swiss-French border is an arbitrary delimitation; Occasionally, however, the uppermost part of the catchment area of ​​the Orbe with the Lac des Rousses is counted as part of the geographic area of ​​the Vallée de Joux. 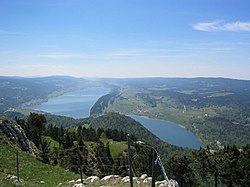 The high valley is traversed by the Orbe, which forms numerous meanders in the boggy lowlands . The north-eastern part of the valley is taken up by Lac de Joux and Lac Brenet . The former is the largest lake in the Jura, which could only arise on the porous limestone layers because the Ice Age Jura glaciers had sealed the entire valley floor with clay deposits. This made the valley floor impermeable to water with the exception of a few places, so that the lake and the adjacent moorland could develop. The Vallée de Joux has no surface drainage, as the water used to disappear through the infiltration funnel ( entonnoirs ) into the subsoil. Today the Lac de Joux and Lac Brenet serve as storage basins for the Vallorbe power station . Much smaller than these two lakes is Lac Ter, which is located in a depression between the steep limestone ridge Le Revers and the Risoux chain.

Due to the altitude, the Vallée de Joux is characterized by a harsh climate. In Le Sentier the mean January temperature is –4.2 ° C, the mean July temperature is 13.7 ° C. The complete seclusion of the valley - the Vallée de Joux is, in terms of its area (32.4 km²) and its volume (1.13 km³), the largest depression without surface drainage in Switzerland - enables the formation of a distinctly cold air lake on winter nights of radiation . This is an essential prerequisite for the relatively rapid freezing of the Lac de Joux. On January 31, 1888, a temperature of −41 ° C was registered. In the valley, the mean annual rainfall is around 1600 mm, while on the surrounding heights it is significantly more than 2000 mm.

Around 6,200 people lived in the Vallée de Joux at the end of 2004. In the last 35 years the population has decreased significantly due to emigration. In 1970 there were still 7,700 inhabitants. The valley is divided into the three communities of Le Chenit , L'Abbaye and Le Lieu , which in turn are made up of numerous different street settlements. The most important localities are Le Sentier and Le Brassus (municipality of Le Chenit) and Le Pont (municipality of L'Abbaye) on the north-east bank of Lac de Joux.

Due to the harsh climate, extensive agriculture and fishing were always practiced in the high valley . As early as the 15th century, the valley dwellers were looking for new ways to earn a living by using the extensive forests, and wood has been exported since the 16th century . The first blacksmiths, hammer mills and sawmills were built. Charbonnières, in particular, burned charcoal , which was brought to Vallorbe from the 18th century to supply the local industry.

In addition to the metal processing industry, the manufacture of wooden vessels first experienced a heyday , and from the 18th century onwards the watch industry also flourished. At first, watchmaking was mainly done from home, later several watch factories were built. In the second half of the 19th century, ice mining in Lac de Joux became an important business. The construction of the railway from Vallorbe to Le Pont goes back to the initiative of the Compagnie des glacières des lacs de Joux et Brenet . This made it easier to transport the products of the valley and the Vallée de Joux was connected to the national transport network. During the two world wars in particular, peat was cut in the moor areas along the Orbe .

The Vallée de Joux can be reached by road via Vallorbe and the Col du Mont d'Orzeires , via the Col du Mollendruz or Col du Marchairuz and from France through the Vallée des Rousses. On October 31, 1886, the Vallorbe – Le Pont railway was put into operation, the Pont – Brassus Railway (PBr) built the continuation to the current terminus in Le Brassus, which was inaugurated on August 21, 1899.

With the connection to public transport, tourism developed from the end of the 19th century , but it did not experience a major boom until the 1970s. The Vallée de Joux is suitable for both summer and winter sports. In summer, the Lac de Joux is a magnet for all kinds of water sports , while the surrounding, practically untouched Jura mountains invite you to go on long hikes. In winter, the topography of the valley and the Jura heights are ideal for cross-country skiing . When the Lac de Joux freezes over, it can be used for ice skating or, if covered in snow, also on cross-country trails. International Nordic ski competitions take place in Le Brassus, which has had a ski jumping hill since 1924 . There are also several ski lifts and downhill slopes here. In Le Sentier there is a large sports center, a clock museum and an art gallery.

Because of its remoteness, the Vallée de Joux, which previously formed an impenetrable wilderness, was probably not walked until the 6th century. At that time, a hermit from the Benedictine monastery of Saint-Claude settled in what is now the village of Le Lieu. Until the 9th century, however, the valley was barely populated, only afterwards did people immigrate, mainly from the southwest. In 1126, a Premonstratensian abbey was founded on the east bank of Lac de Joux . The monks of this abbey carried out the first major clearings in the Vallée de Joux and made the area arable.

Since the 12th century the area belonged to the lords of La Sarraz, who sold it to Ludwig II of Savoy in 1344 . This allocated the valley to the lordship of Les Clées . With the conquest of Vaud by Bern in 1536, the Vallée de Joux initially came under the administration of the Landvogtei Yverdon . In 1566, however, it was incorporated into the Romainmôtier Bailiwick. After the collapse of the Ancien Régime , the valley belonged to the canton of Léman from 1798 to 1803 during the Helvetic Republic , which then became part of the canton of Vaud when the mediation constitution came into force . In the history of the 20th century, the valley made a name for itself because it was local watch workers who brought up the idea of ​​the Swiss women's strike in 1991, which was very successful.