Vallorbe is a municipality in the Jura-Nord vaudois district in the canton of Vaud in Switzerland .

Vallorbe is 750  m above sea level. M. , 12 km west of Orbe and 21 km southwest of the district capital Yverdon-les-Bains (linear distance). The industrial community extends in a basin of the Orbe , in the Vaud Jura , between the heights of Dent de Vaulion in the south and Mont d'Or in the north, right on the border with France .

The area of ​​the 23.2 km² municipal area covers a section of the Vaud Jura. The area is traversed from west to east by the Orbe , which rises in a karst spring at the foot of a rock basin. It draws its water from the underground drains of the Lac de Joux and Lac Brenet lakes . In the area of ​​Vallorbe, the Orbe has a flat valley depression up to 500 m wide. To the east of the village it is dammed in the Lac des Rosiers and from the left takes up the Jougnena, which forms the north-eastern border. Below the reservoir the river falls back into a deep notch valley. The valley widening of Vallorbe is flanked by steep, densely wooded and sometimes rocky slopes. In the south the area extends to the Dent de Vaulion (at 1,483  m above sea level, the highest point of Vallorbe) and to the eastern continuation of this ridge (Sur Grati), in the north almost to the Mont d'Or (up to 1,400  m above sea level ) To the west, the municipality extends into the heavily relief area in the area of ​​the Col du Mont d'Orzeires, the pass crossing into the Vallée de Joux . In 1997, 8% of the municipal area was settled, 68% forest and woodland, 22% agriculture and a little less than 2% was unproductive land.

Vallorbe includes the hamlet of Le Day ( 787  m above sea level ) on a ledge south of Lac des Rosiers, the newer housing estate Les Grands Marais on the lower slope of Mont d'Or northeast of the village and a few individual farms. Vallorbe's neighboring municipalities are Ballaigues , Les Clées , Premier , Vaulion , L'Abbaye and Le Lieu in the canton of Vaud and Rochejean , Longevilles-Mont-d'Or and Jougne in neighboring France .

Vallorbe has developed into an important location for the iron industry since the Middle Ages . The first iron smelting furnace was founded in 1285 at La Dernier near the source of the Orbe at the instigation of the Prior of Romainmôtier. A hammer forge was added in 1485, and the first blast furnaces were put into operation in the first half of the 16th century. In the 18th century there were around 20 iron-processing plants on the Vallorbe soil along the Orbe, mainly producing tools, nails and files. The ore deposits were exploited in the area of ​​the Mont d'Orzeires. The charcoal that was needed to operate the smelting furnaces came from the Vallée de Joux, especially from Les Charbonnières. The vast forests of the Risoux served as raw material suppliers .

The actual industrialization of Vallorbe began at the beginning of the 19th century with the establishment of a tool factory (1812). In the period that followed, the industry gradually diversified. New were a cement factory (1870-1933), a chlorine factory (until 1972), the world-leading precision file manufacturer Usines Métallurgiques de Vallorbe (since 1899) and a factory that produces plastic items for industry. Vallorbe was hit hard by the economic crises of the 1930s and 1970s, which also had a massive impact on the population. Numerous businesses had to be closed.

Today, in addition to metal processing (in particular the manufacture of special files), mechanical engineering, precision mechanics and the manufacture of electronic elements, fishing tackle and miniature saws are also of great importance. There is a power plant in La Dernier. Vallorbe is also considered a trading and banking center and has numerous cross-border commuters from France.

Only recently has Vallorbe been concentrating more and more on tourism . The most important tourist attraction in the municipality is the Grotte de l'Orbe , a cave that has been open to the public since 1974 with a cave trail and mineral exhibition in the area of ​​the Orbe spring. The museums also attract tourists, and the surrounding Jura heights are ideal for summer hikes. Winter sports can be enjoyed on the French side at Mont d'Or. 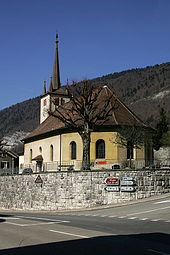 The community has good transport connections. It is located on the main road 9 from Lausanne to the French border in the direction of Pontarlier , a road branches off into the Vallée de Joux. The main road from Lausanne to the Col de Jougne used to lead through Vallorbe. With the opening of the autobahn and the A9 motorway in 1989 until shortly before the French border, Vallorbe is now left behind by transit traffic on this axis, but at the same time has a fast connection to the Swiss plateau .

Furthermore, Vallorbe is a railway junction and an important border station . The first railway line reached the industrial community on July 1, 1870 with the opening of the Cossonay – Vallorbe section of the Lausanne – Vallorbe line . In 1875 the continuation of the line to Pontarlier was inaugurated, which is now closed. On October 31, 1886, the railway line from Vallorbe to Le Pont in the Vallée de Joux was finally put into operation. Vallorbe remained a terminus station until 1915, after which the 6,096 m long tunnel du Mont d'Or created a connection with the line to France , which also has a lower apex than the line to Pontarlier. From then on, this line formed an important international rail link from Paris to Lausanne and on to Italy . The line to Pontarlier suffered severe damage during World War II (including the Jougne tunnel was blown up) and was never rebuilt. A small piece of the former route at Les Hopiteaux-Neufs (France) has been rebuilt for museum operations (Le Coni'Fer ).

The bus routes from Vallorbe to Orbe as well as a direct connection via the motorway to Yverdon-les-Bains ensure the fine distribution of public transport .

Vallorbe has had a casino with a music and theater hall since 1908, a large school and sports center since 1984 and an artificial ice rink in the winter months. A new festival hall was opened in 1987. There has also been an iron museum in the village since 1980 and a railway museum since 1990. The Fort of Vallorbe (Fort de Pré-Giroud), consisting of fortifications from the Second World War, has also been open to the public since 1988.

On June 19, 2009, Vallorbe was the destination of the seventh stage of the Tour de Suisse 2009 with a mountain finish .

The valley of Vallorbe was probably cleared and made arable around 1100 by monks from the Romainmôtier monastery . The place is mentioned for the first time in 1139 in a document from Pope Innocent II under the name de valle urbanensi . In 1148 the name Valle Orbe appeared , in 1228 Valorbes and in 1837 the spelling Valorbe was often used.

Around 1139 a daughter priory was founded by Romainmôtier in Vallorbe; the entire valley belonged to the monastery. The further development of the place was shaped by the iron smelting. With the conquest of Vaud by Bern in 1536, Vallorbe came under the administration of Landvogtei Romainmôtier and formed its own court there. After the collapse of the Ancien Régime , the village belonged to the canton of Léman from 1798 to 1803 during the Helvetic Republic, which then became part of the canton of Vaud when the mediation constitution came into force . In 1798 it was assigned to the Orbe district. In 1883 part of Vallorbe was badly affected by a major fire.

The reformed parish church was built in 1712, next to it there is a rectory from the late Middle Ages. In 1890 the Catholic chapel was built; Another church dates from 1976. In addition to the old town center on the Orbe, Vallorbe has an urban character with numerous tenement houses and industrial facilities. A popular photo subject is the Le Day viaduct , which was put into operation in 1870, over the Lac des Rosiers reservoir. The fountain of Sankt Pankraz, existing since the 12th century but neglected, was restored in 2003.

Other tourist attractions in the vicinity are the caves of Vallorbe (French: Grottes de l'Orbe), the Source de l'Orbe and the Juraparc at the Chalet du Mont d'Orzeires (with bears, wolves and bison). Also worth seeing is the Musée de Fer , in which the history of iron processing and the railroad in Vallorbe is documented. Under the name Fort de Pré-Giroud 39-45 , an artillery work of the Swiss Army from the Second World War was set up as a museum. This position was aimed at the Col de Jougne , from which a potential attack by the German Wehrmacht was feared.

Vallorbe is the birthplace of the internationally successful conductor Marcello Viotti . The writer Benjamin Vallotton (1877–1962) became an honorary citizen in 1958.