Romainmôtier-Envy is a municipality in the Jura-Nord vaudois district in the canton of Vaud in Switzerland . The municipality was created in 1970 through the merger of the previously independent villages Romainmôtier and Envy . The former German name Romansmünster for Romainmôtier is no longer used today. 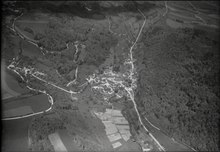 The double community Romainmôtier-Envy is located 6 km southwest of Orbe and 17 km southwest of the district capital Yverdon-les-Bains (beeline). Romainmôtier ( 674  m above sea level ) extends in the narrow valley of the Nozon river , where it emerges from the Jura . Envy is 691  m above sea level. M. in a short southern side valley of the Nozon, also at the foot of the Jura.

The area of ​​the 7.0 km², heavily branched municipal area includes a section of the Jura foot plateau. The northern part of the area is occupied by the narrow valley of the Nozon, which is sunk up to 100 m into the plateau of the Jura foot plateau. To the west, the municipality in the Nozontal extends into the Jura and reaches the Mollendruz chain at 910  m above sea level on the northern slope . M. the highest point of Romainmôtier-Envy. North of the valley is the Bois de Forel forest (up to 770  m above sea level ). To the south the area extends to the Jura foot plateau sloping to the east and over the heights of La Planchette and La Reculanne to the Bec à l'Aigle ( 629  m above sea level ). A narrow point extends southwest into the Prins Bois forest below La Praz . In 1997, 5% of the municipal area was accounted for by settlements, 68% by forests and trees and 27% by agriculture.

Romainmôtier-Envy used to be a predominantly agricultural village. Today agriculture and forestry only play a marginal role in the income structure of the population.

Since the 19th century, the Nozon's hydropower has been used by several mills. Around 1900 there was a brickworks, a textile machine factory and a file grinding shop in Romainmôtier (until 1928). Today the community draws its income from tourism and crafts. Almost 70% of the workforce is also employed in the tertiary sector. Romainmôtier-Envy has a center for graphic arts and crafts and an old people's and nursing home.

The municipality of Romainmôtier-Envy was already inhabited in Roman times. Remains of the iron smelting furnace in the forest of Bellaires to the south-east of the village are evidence of this time. Two smelting furnaces from the 6th century have been preserved.

With the conquest of Vaud by Bern in 1536, the monastery was secularized and the monastery property was confiscated from Bern. As a result, Bern established the Bailiwick of Romainmôtier, which, along with Lausanne, was the richest bailiwick in the Vaud region. It comprised the area of ​​Romainmôtier, reached in the north to the Orbe , in the south to La Sarraz and Cuarnens , and also included the enclaves of Apples and Bursin . The entire Vallée de Joux was also part of the Bailiwick of Romainmôtier. In 1589 Romainmôtier was given the title of city .

After the collapse of the Ancien Régime , the place belonged to the canton of Léman from 1798 to 1803 during the Helvetic Republic, which then became part of the canton of Vaud when the mediation constitution came into force . In 1798 Romainmôtier was assigned to the Orbe district. The former bailiwick area was divided between the districts of Orbe and Cossonay, while the Vallée de Joux has since formed its own district.

On January 1, 1970, the two previously independent municipalities Romainmôtier and Envy were merged and have since formed the twin municipality Romainmôtier-Envy. Envy, which was first mentioned in 1216 under the name Envi , had 45 inhabitants in 1960 and is still a farming village today.

The most important attraction of the place is the Romanesque collegiate church of the former Romainmôtier monastery . The clock tower west of the collegiate church, which once formed the gate in the surrounding wall of the monastery, dates from the 14th century. Next to the tower is the house of Lieutenant Baillival, built in 1685, who was bailiff's governor. Several stately houses from the 16th to 18th centuries have been preserved in the village, including the Glayre house and the rectory from 1746. The monastery museum has been located in the so-called monk's house since 1986.