Apples is a municipality in the Morges district in the canton of Vaud in Switzerland .

Apple is at 630  m above sea level. M. , 7 km northwest of the district capital Morges (air line). The clustered village extends on a hilltop on the edge of the high plateau at the foot of the Jura , in the Waadtländer Mittelland , in a panoramic position above the Morges valley .

The area of ​​the municipal area of ​​12.9 km² covers a section in the western edge zone of the central plateau. The easternmost part of the municipality is located in the catchment area of ​​the Morges rivers and the Le Curbit streams . In the much larger western part of the municipality there is a Molasse hill landscape that was transformed in the Ice Age with extensive forests and partly boggy depressions. These include the forest of Les Bougeries (up to 704  m above sea level in the southwest), the Bois de Saint-Pierre (up to 684  m above sea level in the north) and the Bois de Savoye and Bois de Fermens in the north-west. The highest point of Apple is 708  m above sea level. M. reached at the forest height of La Chaux-Derrière . In the far west, the municipality stretches to the edge of the dry valley of Grand Marais , which once served as a meltwater channel on the edge of the Ice Age Rhone glacier . This valley is drained to the northeast by the Veyron . In 1997, 5% of the municipal area was accounted for by settlements, 48% for forests and trees and 47% for agriculture.

Apples includes the two isolated new housing estates En Lèvremont ( 600  m above sea level ) and La Motte ( 615  m above sea level ) on the gentle slopes of the Morges Valley, as well as a few individual farms. The neighboring communities of Apples are Ballens and Mollens in the west, Pampigny and Sévery in the north, Echichens and Clarmont in the east, Reverolle and Bussy-Chardonney in the southeast and Yen in the south .

Until the 20th century, Apples was primarily an agricultural village. Today agriculture plays only a subordinate role as a branch of the population. It focuses on agriculture and animal husbandry and dairy farming . A small industrial zone was created north of the village, including the manufacture of switchgear and stainless steel pipes. Further jobs are available in the service sector. In Apples there is a riding arena, a sports and school center as well as a regional retirement and nursing home. In the last few decades the village has developed into a residential community thanks to its attractive location. Many workers are commuters who work mainly in the cities of Morges and Lausanne .

In 1981, Logitech was founded on a farm in Apples by Daniel Borel and some of his fellow students from Stanford University .

The community has good transport connections. It is located on the main road from Morges to Bière . On July 1, 1895, the narrow-gauge railway Bière-Apples-Morges (BAM) with a station in Apples was put into operation. The inauguration of the former narrow-gauge railway Apples-L'Isle (AL) followed on September 12, 1896 . On the railway line from Apples to L'Isle , several train connections are made with minibuses instead of trains due to the low traffic and the villages far from the train stations. 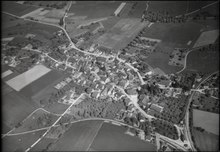 Apples can look back on a long tradition of settlement. Traces from the Neolithic (shell stones ), the Bronze Age and the Roman Age have been found in the municipality . The first real settlement was founded by the Burgundians in the 5th century and was probably called Iplingen . This name probably changed with the Romanization via Iplens in Aplis . The village was first mentioned in a document under this name in 1011, when King Rudolf III. gave the church with the village to the Romainmôtier monastery. Later the spelling Aples (1222) and 1328 the current place name appeared.

With the conquest of Vaud by Bern in 1536, Apples came under the administration of the Bailiwick of Romainmôtier as an exclave . After the collapse of the Ancien Régime , the village belonged to the canton of Léman from 1798 to 1803 during the Helvetic Republic, which then became part of the canton of Vaud when the mediation constitution came into force . In 1798 Apples was first assigned to the Morges district, and in 1803 to the Aubonne district.

The medieval church of Apples stands on the foundations of a previous Romanesque building . It was redesigned in 1838 and 1905.