Vullierens is a municipality in the Morges district in the canton of Vaud in Switzerland .

Vullierens lies at 528  m above sea level. M. , 7 km north of the district capital Morges (linear distance). The village extends on a slope slightly to the east above the Senoge valley, in the western Gros de Vaud in the Vaud Central Plateau .

v Vullierens is one of the small communities in the canton of Vaud. 92.3% of the residents are French-speaking, 3.2% English-speaking and 3.0% German-speaking (as of 2000). The population of Vullierens was 514 in 1900. After the population had decreased to 333 inhabitants by 1970, a slight increase in population was observed again.

Vullierens was a predominantly agricultural village until the second half of the 20th century . Even today, agriculture has an important role in the income structure of the population. On the western slope of the Senoge there are several small wine-growing areas (a total of 17 hectares). Further jobs are available in local small businesses and in the service sector. In the last few decades the village has developed into a residential community. Many workers are commuters who work mainly in Lausanne.

The community is located off the main thoroughfares, but has good connections with the neighboring villages. It is located on the cantonal road from Aclens to Cottens . Vullierens is connected to the public transport network through a Postbus course that runs from Morges via Cottens to Cossonay . 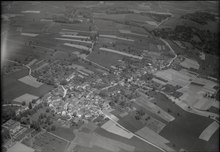 The first written mention of the place took place in 1047 under the name Vuilerens . The names Wilerens (1049), Willerens (1221), Willereins (around 1250), Wulierens (1263) and Willierens (1345) appeared later . The place name goes back to the Burgundian personal name Wilihar and means for the people of Wilihar .

Vullierens has been under the lords of Cossonay since the Middle Ages . The aristocratic family de Vullierens has been documented since the 12th century. In 1421 the village came to the de Colombier family, later ownership changed several times. With the conquest of Vaud by Bern in 1536, Vullierens came under the administration of the Bailiwick of Morges . After the collapse of the Ancien Régime , the village belonged to the canton of Léman from 1798 to 1803 during the Helvetic Republic, which then became part of the canton of Vaud when the mediation constitution came into force . In 1798 it was assigned to the Morges district.

The current parish church was built in 1733 on the site of a previous medieval building. South of the village is the baroque castle, which was built between 1706 and 1712. The main building has two lower wings and contains a theater hall. The palace garden is known for its iris cultures (around 500 species are shown) that bloom in June. In the town center there are some characteristic farmhouses from the 17th to 19th centuries.