Lonay is a municipality in the Morges district in the canton of Vaud in Switzerland . 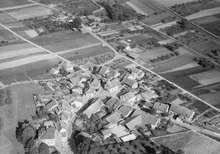 Lonay is at 416  m above sea level. M. , 2.5 km northeast of the district capital Morges (air line). The village extends on a slope inclined to the south, above the valley of the Le Bief brook , in a panoramic position around 50 m above lake level of Lake Geneva .

The area of ​​the 3.7 km² municipal area covers a section of the Vaud Central Plateau north of Lake Geneva. The communal soil extends from the lower reaches of the Bief in a wide valley depression traversed by the main traffic routes northwards over the slope of Lonay to an open hollow in the headwaters of the Bief. This trough is flanked in the east by the plateau of Echichens, in the west by the Crêt Blanc hill , on which at 475  m above sea level. M. the highest point of Lonay is reached. In 1997, 31% of the municipal area was in settlements, 7% in forests and woodlands, 61% in agriculture and a little less than 1% was unproductive land.

Lonay includes the hamlet of Roman ( 436  m above sea level ) on the slope west of the village as well as several commercial and industrial quarters in the Bief valley. Neighboring communities to Lonay are Morges , Echichens , Bremblens , Echandens , Denges and Préverenges .

Until the middle of the 20th century, Lonay was predominantly an agricultural village. Even today, agriculture and viticulture on the slopes around Lonay have a certain importance in the income structure of the population.

The first handicraft business in the municipality was a brickworks founded in 1437, which was mechanized in 1880 and was one of the most important in western Switzerland until it was closed in 1913. Since the 1970s, several industrial and commercial zones have been created in the valley below Lonay along the main traffic axes, which offer numerous jobs. These include companies in electronics, mechanical engineering, the plastics and food industries. In the last few decades the village has developed into a residential community thanks to its attractive location. Many workers are therefore commuters who work primarily in Lausanne and Morges.

The community has good transport connections. It is easily accessible from Morges . The A1 (Geneva-Lausanne) opened in 1964 runs through the southern municipal area . The next connections are in Morges and Crissier.

On July 1, 1855, the Renens – Morges section of the Lausanne – Geneva railway line was inaugurated with the Lonay-Préverenges station. From 1969 to 1971, the large Lausanne marshalling yard of the SBB was built, which with a track length of 60 km takes up around 15 hectares of the municipality of Lonay; the eastern part is in the Denges area.

Finds of Roman and early medieval graves indicate an early settlement of the municipality. The first written mention of the place took place in 1177 under the current name Lonay . In 1213 the name Losnai appeared . The place name goes back to the Latin personal name Lonius .

In Lonay the Lausanne cathedral chapter and the Lac de Joux ( L'Abbaye ) abbey owned rich estates. Lonay was split into numerous fiefs. With the conquest of Vaud by Bern in 1536, the village came under the administration of the Bailiwick of Morges . After the collapse of the Ancien Régime , Lonay belonged to the canton of Léman from 1798 to 1803 during the Helvetic Republic, which then became part of the canton of Vaud when the mediation constitution came into force . In 1798 it was assigned to the Morges district.

The parish church of Saint-Germain was rebuilt in 1740–1741 on the site of a medieval predecessor building, including the early Gothic choir. The rectory has been in a former winery of the Lac de Joux Abbey since the 18th century. In the old town center of Lonay there are some characteristic farm and wine farms from the 17th to 19th centuries.

In Roman there is the Saint-Maurice chapel from the 14th century. The mansion in Roman lingerie dates from the 17th and 18th centuries. The late medieval house La Réale in Roman-Dessus has a large roof in the Bernese style.