Gollion is a municipality in the Morges district in the canton of Vaud in Switzerland . 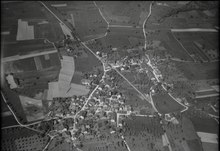 Gollion lies at 506  m above sea level. M. , 8 km north of the district capital Morges (linear distance). The clustered village extends on a slope slightly to the south of the plateau of the southwest Gros de Vaud , west of the Venoge valley , in the Vaudois Central Plateau .

The area of ​​the 5.4 km² municipal area comprises a section in the southwest of the Gros de Vaud, the granary of the canton of Vaud. The main part of the municipality's ground is taken up by the slightly undulating high plateau, which is located in the north of Gollion on the wooded Brichy hill at 561  m above sea level. M. reaches the highest point. The Ruisseau de l'Ouffema brook in the north and the Senoge in the south cut into this plateau, each forming the border. In the east, the area extends into the Venoge valley. In 1997, 7% of the municipal area was accounted for by settlements, 11% for forests and trees and 82% for agriculture.

Gollion consists of two districts, the actual Gollion to the west and Mussel to the east of the main road. The hamlet Crausaz ( 450  m above sea level ) on the western slope of the Venoge and some individual farms also belong to the village . Neighboring municipalities of Gollion are Cossonay , Penthalaz , Penthaz , Vufflens-la-Ville , Aclens , Vullierens and Senarclens .

Gollion was a predominantly agricultural village until the second half of the 20th century . Even today, agriculture and fruit growing have a certain importance in the income structure of the population. There are some smaller wine-growing areas to the west of the village . Several mills have existed in the Venoge valley since the 15th century. Further jobs are available in local trade and in the service sector. Gollion is the location of the cantonal training center for civil defense. In the last few decades the village has also developed into a residential community. Many employees are therefore commuters who work primarily in the greater Lausanne area.

The community is very well developed in terms of traffic. It is on the main road from Morges to Cossonay . Gollion is connected to the public transport network by a Postbus course that runs from Morges via Aclens to Cossonay. However, the bus does not circulate every day.

The municipality of Gollion was settled very early. There are remains of the Helvetii refuges, which were also used again in Roman and Burgundian times. The place was first mentioned in a document in 1228 under the name of Gollun . In 1235 the name Gollon appeared and in 1453 Goillon . The place name goes back to the word gouille (pond, water pond).

Since the Middle Ages , Gollion was part of the Cossonay domain , from 1472 to 1677 to the L'Isle domain and then to the Grancy domain until 1798. With the conquest of Vaud by Bern in 1536, the village came under the administration of the Bailiwick of Morges . After the collapse of the Ancien Régime , Gollion belonged to the canton of Léman from 1798 to 1803 during the Helvetic Republic, which then became part of the canton of Vaud when the mediation constitution came into force . In 1798 it was assigned to the Cossonay district.

The reformed parish church of Gollion was built in 1749, the front tower dates from 1861. In Crausaz there was a Johanniter commandery from 1228, the building of which was converted into a castle in the 18th century. In the town center there are some typical farmhouses from the 17th to 19th centuries.