Aubonne ([ obɔn ], in the native Franco-Provencal dialect [ oˈbuna ]) is a municipality in the Morges district of the canton of Vaud in Switzerland . 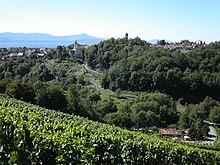 Aubonne lies at 508  m above sea level. M. , 8 km west of the district capital Morges (linear distance). The historic town extends on a promontory above the valley of the Aubonne river , on the edge of the Jura foot plateau , in a panoramic location around 130 m above the lake level of Lake Geneva .

The area of ​​the 6.9 km² municipal area includes a section on the edge of the Jura foot plateau. The municipal soil extends from the area at the foot of the Vaudois Côte northwards over the promontory of Aubonne to the Aubonne valley, which is deeply carved into the molasse layers of the Jura foot plateau. The eastern boundary of the municipality is the winding course of the Aubonne in this valley. To Aubonnes municipality includes the western side of the valley and the small Seitentälchen of Armary . On the Jura foot plateau is 643  m above sea level. M. reached the highest point of Aubonne. In 1997, 19% of the municipal area was in settlements, 13% in forests and woodlands, 67% in agriculture and a little less than 1% was unproductive land.

Several new housing estates belong to Aubonne, the hamlets Trévelin ( 500  m above sea level ) and Bougy-Saint-Martin ( 549  m above sea level ) on the slope of the Côte as well as some individual farms and, since July 1, 2011, the former municipality of Pizy . The neighboring municipalities of Aubonne are Allaman , Féchy , Essertines-sur-Rolle , Montherod , Saint-Livres , Lavigny and Etoy .

For a long time, Aubonne was an agricultural town. Today agriculture plays only a subordinate role as a branch of the population. On the slope of the Côte below Aubonne lies an extensive wine-growing region . The rest of the agricultural area is predominantly arable .

Because Aubonne is not located on the railway line from Lausanne to Geneva , which was built in the middle of the 19th century , industrialization came relatively late. The Aubonne powder mill , founded in 1853 and privatized in 1997, established itself as the first factory on the parish . Other important companies were only added from the middle of the 20th century. These include a precision foundry, Velcotrex SA (adhesive closures), Serono laboratories, IKEA furniture stores and the pharmaceutical industry. The commercial zone is located on the plateau on the connecting road between the motorway and the town. Most jobs are in the service sector. In the last few decades the place has developed into a residential community. New residential quarters emerged mainly in the west and south-west of the old town.

As a historic town, Aubonne is a magnet for tourism. It has had a wood museum since 1967. In 1963, the canton of Vaud established Switzerland's first arboretum in the Aubonne valley , showing native and introduced tree species over an area of ​​around 200 hectares.

The town is well developed in terms of traffic. It is at the crossroads of the main roads from Rolle to Cossonay and from Allaman to Gimel . The Aubonne motorway junction on the A1 (Geneva-Lausanne) opened in 1964 , which crosses the municipality, is around 2 km from the city center.

The next station on the Lausanne-Geneva railway line (section from Morges to Coppet ), which was inaugurated on April 14, 1858, is in Allaman, just outside the municipality. From July 23, 1896 to May 17, 1952, an electric train from Allaman to Aubonne was in operation. Today, Aubonne is connected to the public transport network by the Allaman - Aubonne - Gimel bus line. There are other postbus courses after Rolle and Etoy .

Historical aerial photo from 400 m by Walter Mittelholzer from 1919

The municipality of Aubonne was populated very early. The oldest finds are known from the Bronze Age , the foundations of a villa were discovered from the Roman period . Grave finds come from the early medieval settlement.

The first written mention of the place took place in 1177 under the name Albona , in 1606 the spelling Aulbonne appeared . The place developed around the castle of the Lords of Aubonne, built in the 11th century, and received a defensive wall as early as the first half of the 13th century. In 1255 the castle and town were sold to Count Peter II of Savoy . He handed over the rule as a fiefdom to the Thoire-Villars family, from whom it came to the lords of Gruyères via Grandson in 1393 . Until the 15th century, Aubonne was the most important city on the Vaudois Côte between Geneva and Lausanne. Weekly markets have been held since the 13th century and there have been two three-day markets every year since 1487.

Because the Count of Gruyeres was allied with the Confederates , Aubonne was spared the effects of the Burgundian Wars in 1476. With the conquest of Vaud by Bern in 1536, the town came under Bernese sovereignty, but until 1553 belonged to the Counts of Gruyères.

In the period that followed, the rulership frequently changed hands. It was bought by Frenchman Jean-Baptiste Tavernier in 1670 and Henri Duquesne in 1685 , who sold it in 1701 to Bern , which set up the Aubonne Bailiwick of the same name in the previous territory. After the collapse of the Ancien Régime , the small town belonged to the canton of Léman from 1798 to 1803 during the Helvetic Republic, which then became part of the canton of Vaud when the mediation constitution came into force . From 1803 to 2007, Aubonne was the capital of the district of the same name , and since then it has been part of the Morges district .

On July 1, 2011, the former municipality of Pizy merged with Aubonne, where Aubonne is also the name of the new merged municipality .

Aubonne has a picturesque medieval townscape with narrow streets, patrician houses from the 16th to 19th centuries and remains of the former fortifications (including two gates).

The castle, whose origins go back to the 11th century and consisted of two separate building complexes, was largely rebuilt in the 17th century. It stands slightly elevated on the northern edge of the old town above the Aubonne valley. The baroque palace and the round tower with dome roof date from 1680. Inside the palace there is an arcade courtyard; the courtroom has a painted ceiling from 1670. The castle was extensively restored between 1980 and 1985.

The first church in today's parish was in Trévelin and was demolished in 1577. In 1306 the Saint-Etienne chapel was inaugurated on the outskirts of the historic town and around 200 years later the Saint-François chapel was built right next to it. These two chapels were included in the construction of the new parish church in 1579, which today has a Gothic choir and a flamboyant-style chapel with paintings from the 17th century in the south. In 1700 the heart of the French admiral Abraham Duquesne was buried in the church of Aubonne behind a black marble slab.

In the old town is the arcaded Hôtel de Ville, also known as the Grenette. It was built in 1770–80 and initially served as a grain hall. The Maison d'Aspre, a private house with orangery, dates from the 18th century.