Montricher is a municipality in the Morges district in the canton of Vaud in Switzerland . The former German name Rogersberg is no longer used today. 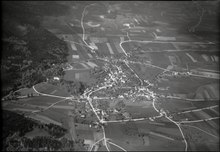 The village of Montricher is located at 752  m above sea level. M. , 14 km northwest of the district capital Morges (air line). The scattered village stretches along a small hill at the eastern foot of the Mont Tendre , a scenic location above the level of the western Vaud Midland .

The area of ​​the 25.9 km² municipal area includes a section of the Jura foot plateau and the Vaud Jura . The smaller eastern part of the municipality is occupied by the Jura foot plateau, which slopes slightly to the east and is at an average altitude of around 680  m above sea level. M. lies. The eastern border forms the upper reaches of the Veyron , to which the streams L'Etremble , La Malagne and Le Morand flow from Montricher . To the west, the community area extends over the densely wooded mountainside, in which the mostly dry valley Combe de la Verrière is deepened, down to the foremost Jura chain. In the north is the height of the Châtel ( 1432  m above sea level ), the entire western part is taken up by the anticline of Mont Tendre. This mountain peak, which is 1679  m above sea level. M. forms the highest point of the municipality and at the same time the highest point of the Swiss Jura, lies entirely in the area of ​​Montricher. The heights of the Jura are marked by cart fields and sinkholes , and on the mountainside there are caves that are explored by speleologists ; the most famous of these is the Chenuz grotto . The mountain has above the treeline widespread high grazing pastures with the typical powerful pines on either individually or standing in groups. In 1997, 3% of the municipal area was in settlements, 58% in forests and woodlands, 38% in agriculture and a little less than 1% was unproductive land.

Until the second half of the 20th century, Montricher was predominantly an agricultural village. Even today, arable farming on the Jura foot plateau as well as cattle and dairy farming in the higher elevations play an important role in the income structure of the population. The most important alp above Montricher is the Alpage du Mont Tendre and a little below it in large clearings are the Alp von Mollens and the Maiensäss Pré Anselme .

The forestry plays an important role. There are also several gravel pits. Further jobs are available in small businesses and in the service sector. In the last few decades the village has also developed into a residential community. Many workers are therefore commuters who work mainly in the surrounding larger villages and in the cities along Lake Geneva.

Montricher has had a holiday center since the late 1980s. It is the location of an institute for the disabled. The airfield for the Montricher gliding center in western Switzerland is located on the Jura foot plateau near the Veyron.

The community is located off the main thoroughfares on a connecting road from L'Isle along the foot of the Jura to Bière . On September 12, 1896, the narrow-gauge railway line from L'Isle to Apples of the Chemin de fer Bière-Apples-Morges was put into operation. The Montricher train station is around 1.5 km outside the town center. The Postbus course, which runs from L'Isle via Montricher and Bière to Gimel , provides for the fine distribution in public transport .

The first written mention of the place took place in 1049 under the name Mons Richarius . The names Monte Richerii (1177) and Monrichie (1412) appeared later , and the current place name has been passed down since 1301. A descendant of the Lords of Grandson founded a castle in 1049 on the hill above today's town. The town of Montricher gradually developed on a small terrace below this castle. While the castle had been under the lords of La Sarraz (a side branch of the lords of Grandson ) as a fief since the 12th century , the town of Montricher was not dependent on feudalism and was directly subordinate to the emperor. At that time it had a large area of ​​influence that reached as far as Vufflens-le-Château . In 1293 the town passed to Ludwig von Savoyen , but the castle remained under the rule of La Sarraz. Only when the castle, which had meanwhile come to Cossonay , was also sold to Savoy in 1406, did Montricher and the fortress again belong to the same rule.

With the conquest of Vaud by Bern in 1536, Montricher came under the administration of the Bailiwick of Morges . After the collapse of the Ancien Régime , the place belonged from 1798 to 1803 during the Helvetic period to the canton of Léman , which was opened up when the mediation constitution came into force in the canton of Vaud. In 1798 Montricher was assigned to the Cossonay district.

In 1770, almost the entire historic town fell victim to a conflagration. The only three houses that were not affected by this fire disaster burned down in 1828 along with numerous rebuilt buildings. Nothing was left of the former historical town, which was 180 × 130 m in size. The stones of the former city wall and the former castle were used to rebuild the village after 1828.

Today Montricher has the character of a farming village. The reformed parish church had served as a castle chapel before the fires. The bell tower with a pointed dome used to be part of the castle fortifications. In the center of the village, the farmhouses and town houses show the uniform image of a rural settlement from the first half of the 19th century. Only a few remains of the ruins of the former castle have been preserved.