The Compagnie du Chemin de fer Bière-Apples-Morges ( BAM ) is a former private railway company in the canton of Vaud in Switzerland . In July 2003 it was renamed Transports de la region Morges-Bière-Cossonay (MBC) and, in addition to its original railway lines, also operates several bus routes in the Morges region and the Cossonay Gare-Ville funicular (CG).

BAM, short for Bière-Apples-Morges , remained for ten years as a brand name for the railway operations of MBC. On June 19, 2013, the company announced that in future all activities will be carried out under the MBC label.

The 19.1 km long main route leads from Morges on the shores of Lake Geneva via Apples to Bière at the foot of the Jura . A 10.6 km long branch route connects Apples with L'Isle – Mont-la-Ville , this route is now mostly served by a minibus.

The station on the western outskirts of Apples is designed as a wedge station; the station building is located between the tracks of the main line and those of the branch line to L'Isle . There were and are no scheduled direct trains from Morges to L'Isle. Occasional direct trains in freight and tourist traffic have to leave Apples train station in the direction of Bière and then reset. The main route leads west over flat to gently sloping terrain; At Ballens (713 m above sea level) the highest point of the route network is reached. The terminus in Bière (694 m above sea level) is the center of operations with a depot and workshop. Around one kilometer before the end of the line at Bière, a 2.1 kilometer long siding branches off to the barracks of the Swiss Army , which is used exclusively for the transport of goods.

The opening of the barracks in Bière in 1873 (and the resulting freight traffic) was the main reason for planning a railway line along the Jura . A route was planned from Yverdon-les-Bains via Orbe , L'Isle , Montricher , Bière, Gimel and Genolier to Nyon . But this project failed because the costs were too high. The BAM company was founded on June 29, 1893, and construction work began on August 5, 1893.

The opening of the main line from Morges via Apples to Bière was on July 1, 1895. In the meantime a second company had been founded. They built the branch line from Apples to L'Isle; the opening took place on September 12, 1896. It handed over management to BAM, but quickly got into financial difficulties. That is why Chemin de fer Apples-L'Isle (AL) was taken over by BAM on July 1, 1899.

Initially, only steam locomotives ran on both routes . There had been plans for electrification as early as 1904, but these were only implemented after the start of World War II , when coal became scarce. Electrical operations between Morges, Apples and Bière began on May 10, 1943, and between Apples and L'Isle only on November 13, 1943, after the federal government had checked whether the branch line could be dispensed with.

During the 1960s there were considerations to discontinue rail operations, but the neighboring communities successfully defended themselves against it. A thorough modernization followed. Between 1992 and 1995, the Morges train station was completely rebuilt and BAM received a covered platform. The siding to the barracks in Bière was opened on April 10, 1997. 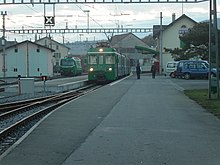 The three shuttle trains from 1981, consisting of multiple units Be 4/4 11–13 and matching control cars Bt 51–53, run the regional trains between Bière and Morges. As the majority of railcar 13 was involved in the accidents, it was renumbered out of superstition and now bears the number 14. An almost identical shuttle train was taken over by the Travys ( YSteC Be 4/4 3 and Bt 52); These two vehicles are used as Be 4/4 15 and Bt 54 in the same way as the existing ones and also mixed with them. However, the Bt 54 is in the opposite direction than the Bt 51-53 because the multiple control line was mounted differently on the Travys. The two modern locomotives Ge 4/4 21-22 from 1994 are used for freight transport.

There are still one of five old BDe 4/4 1–5 (built 1943–1949) available as a reserve; it is only used together for special tourist trips. Four narrow-gauge type FFA standard wagons I, like those owned by the Rhaetian Railway (RhB), round off the wagon fleet. These cars can also be added to the shuttle trains as intermediate cars. In 2010, three new intermediate wagons were delivered by Stadler Altenrhein, which have a low-floor entrance and are lined up in the commuter trains in order to meet the requirements of the Disability Equality Act.

In 2006 the railway bought two standard gauge shunting tractors of the type Te III from the SBB. These are required for the roll buck maneuver at Morges train station.

Before the electrification, the BAM had four tank engines of the type G 3/3 with the numbers 1-4. In 1921 she took over from the SBB - Brünigbahn the G 3/3 number 109 and set them as paragraph 6. In 1943 this locomotive was sold to the Renfer company in Biel- Mett and was used on the local industrial railway. In 1941 the HG 3/4 7 came from the Furka-Oberalp-Bahn as a "war reserve" to BAM; it was sold to France in 1946. Of the steam locomotives, the former Brünigbahn tank locomotive G 3/3 number 6 has been preserved on the Blonay – Chamby museum railway .