The Stadler Rail AG (also Stadler Rail Group ) based in the Swiss Bussnang is a manufacturer of railway vehicles . The product focus is on powered vehicles such as multiple units , light rail vehicles and locomotives . A specialty are made-to-measure train production and cog railway vehicles. Stadler Service has developed into an important pillar, i.e. the maintenance of individual rail vehicles or entire fleets.

The company is organized as a holding company and consists of 15 subsidiaries with locations in Algeria , Germany , Italy , Great Britain , the Netherlands , Austria , Poland , Russia , Sweden , Switzerland, Spain , the Czech Republic , Hungary , the USA and Belarus . Stadler Rail employs more than 10,900 people worldwide, including around 4,000 in Switzerland, 1,500 in Germany, 3,000 in Central Europe (Belarus, Poland, Hungary) and 1,000 in Spain.

Foundation and development in Switzerland

One of the first export successes: GTW for New Jersey Transit

1942 founded Ernst Stadler in Zurich the engineering firm Stadler and equipped in the war years road and small rail vehicles to battery power to. The company moved to Wädenswil in 1945 and built the first small battery, electric and diesel tractors ( shunting locomotives ) as the Ernst Stadler electric vehicles . However, the company had to file for bankruptcy as early as 1951 .

Ernst Stadler then worked for various clients in their respective workshops until he moved into a small workshop in Zurich. In 1962 he moved to Bussnang in the canton of Thurgau , where he had a larger workshop built. In the following years Stadler relocated the official head office to Bussnang and transformed the company into a stock corporation called Stadler Fahrzeug AG from 1974 .

Ernst Stadler's death in 1981 marked the first turning point in the history of the company, whose shares were family-owned. The widow Irma Stadler continued to run the company. In 1984, passenger vehicles were also built for the first time, with a focus on custom-made products for private Swiss railways.

A second turning point came in 1989 when Irma Stadler offered the company to her granddaughter's husband, professional ice hockey player Peter Spuhler . With a workforce of almost two dozen people, a modular rail vehicle had been developed, the parts of which were purchased from various suppliers and assembled in Bussnang. The first articulated multiple unit (GTW) came from this concept in 1995 .

As demand increased, the workforce was gradually enlarged and the company rebuilt. In 1997, Schindler Waggon (SWG) took over a large part of the Altenrhein plant in Thal , a municipality in the canton of St. Gallen , and founded Stadler Altenrhein AG . Since the former Schindler plant at Altenrhein Airport , which also included parts of the Altenrhein aircraft and vehicle works (FFA) that was taken over , is significantly larger than the Bussnang site, parts of the plant were relocated when the takeover took place, and part of it as the Altenrhein industrial park , often called Stadler Industrial Park , is sublet.

The purchase of Altenrhein initiated an unexpected expansion course based on the purchase of plants and production areas that are slowly dying away. To this was added from vehicles Stadler the new family holding Stadler Rail AG and the work Bussnang formally into the Stadler Bussnang AG outsourced. In 1998, the cog railway division of the former Swiss Locomotive and Machine Factory (SLM) was taken over by Sulzer AG .

In 2001 the new, modern assembly hall 2 was opened in Bussnang , which was to largely replace the first hall from 1962. As part of the modernization, the headquarters also received a more contemporary office building. Both the increasing order volume and the ever longer vehicles required further expansion, which was completed with the inauguration of assembly hall 3 in 2004.

The Swiss Metal Casting AG foundry in Biel , which went bankrupt in autumn 2004 , was immediately taken over by Stadler for its own use and continues to produce as Stadler Stahlguss AG . Only a few weeks later, the gradual takeover of the former PFA (partner for vehicle equipment) in Weiden in the Upper Palatinate , for which Stadler Weiden GmbH was founded at the beginning of 2005, was agreed . The production of Stadler Weiden GmbH was closed in 2007 due to a lack of orders.

Stadler completed one of its most important acquisitions on September 7, 2005 in Winterthur . The acquisition of Winpro AG , in which the company previously held a 40 percent stake, brought part of the remains of the traditional Swiss locomotive and machine factory under the umbrella of Stadler Rail.

On June 30, 2008, the Swiss Federal Railways (SBB) announced that Stadler Rail had won an order worth around one billion francs. The contract comprised the construction of 50 six-car double-decker multiple units for the fourth partial extension of the Zurich S-Bahn . For Stadler it was the first order for the newly developed Stadler KISS double-decker trains (regional traffic up to 160 km / h), which are produced by Stadler Altenrhein; The factory was expanded to include a hall for this purpose, and delivery of the trains began in spring 2012.

The construction of seven (plus an option for three more) rack-and-pinion electric locomotives of the type Stadler He 4/4 for the São Paulo – Santos freight train route in Brazil is another important order that was published on February 26, 2010.

On May 9, 2014, Stadler was awarded the contract by SBB to build 29 multiple units worth CHF 980 million for north-south traffic through the Gotthard Base Tunnel . The contract includes an option to order 92 more trains. These trains, known as the Stadler EC 250 , are 202 m long and reach a top speed of 250 km / h. Stadler calls the high-speed trains SMILE.

The groundbreaking ceremony for the future St. Margrethen production site took place in mid-2018 and will gradually replace a large part of the Altenrhein plant as a double-decker competence center from the end of 2019. The new plant is located north of the train station, on the 65,000 square meter Altfeld area, which used to be used by the wood industry and is currently owned by HIAG Immobilien AG. Only the box detail production will continue to be carried out at the Altenrhein site.

Developments in Germany and international expansion

The entry into the German vehicle market began with the formation of a consortium with Adtranz and Bombardier Transportation for the delivery of GTW 2/6 DMU to the Hessische Landesbahn as well as DB Regio and its subsidiary Usedomer Bäderbahn in the years 1999 to 2002.

The Adtranz plant in Pankow , in which the Regioshuttle were manufactured and which is located on the site of the former Berlin manufacturer of power plant equipment Bergmann-Borsig , was outsourced to Stadler Pankow GmbH in 2000, in which Stadler owns 66 percent as part of a joint venture involved. Due to antitrust requirements in connection with the takeover by Bombardier Transportation , Adtranz finally sold the entire plant and the licenses for the Regioshuttle and Variobahn vehicle families to Stadler in 2001 . Under the managing director Michael Daum, who had switched from Adtranz to Stadler, there was strong growth in sales and jobs. The company started in 2000 with 200 employees, in 2003 there were 300, in 2011 it had 830 and in 2013 it had 1,300 employees. Another location was added in 2002 with Velten in Brandenburg, and in 2011 an assembly plant in Berlin-Hohenschönhausen . In 2012, a logistics center was put into operation in the Reinickendorf district of Berlin .

On January 7, 2016, Stadler announced that the company was taking over the line locomotives division in Valencia, Spain, from its German competitor Vossloh .

Beginning in December 2016 announced Stadler and Solaris Bus & Coach (SBC), the establishment of the joint venture Solaris Tram Sp. Indicate under which the Solaris factory in Poland Sroda Wielkopolska to twice its size should be expanded. Stadler Polska and Solaris have been working together as a consortium led by Stadler since September 2016 in tenders for tram vehicles in Poland. At that time, Stadler's Siedlce factory employed around 800 people and had manufactured 320 vehicles for the European market. The joint venture, which officially started operations on April 1, 2017, was fully taken over by Stadler in November 2018. This was initiated by the sale of the consortium partner SBC in mid-2018 by the Olszewski family to the Spanish rail vehicle manufacturer CAF . With the takeover of Solaris, the latter intended in particular to enter the commercial vehicle market - namely with trolley buses, electric hybrid buses and battery buses - and sold the remaining 40 percent stake in Solaris Tram (and inherently the Tramino product series ) to Stadler.

Stadler went public in April 2019. Up to this point in time 80% of the company shares were held by Peter Spuhler, 10% of the company was owned by the management and another 10% belonged to the German RAG Foundation .

Stadler has been listed on the SIX Swiss Exchange since April 12, 2019 . In the course of the IPO, around 40 million existing shares and thus 40.25% of the share capital were placed.

The Service division operates over 40 service locations worldwide. A service AG was founded, the service activities were concentrated in a separate division in 2019.

Stadler received its first substantial maintenance contract in 2006 from the Hungarian state railway MAV. In addition to the delivery of 30 multiple units, their maintenance over a period of 30 years was agreed in the requirement profile.

Stadler has been developing the signaling division at the Wallisellen site since 2017 . The area focuses on three developments: ATO, which stands for Automatic Train Operation, with this technology a partial or full automation of the operation can be achieved; CBTC, which stands for Communication Based Train Control, allows trains like metros to be driven automatically and without a driver; and the train protection system ETCS. ETCS stands for European Train Control System. It is the pan-European train protection system, but also serves as a train control system with driver's cab signaling. It is often used in mixed operation with national train protection systems. 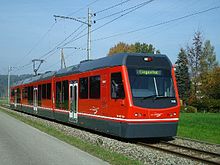 The articulated multiple unit GTW was built from 1995 to 2017. It is the first product to be mass-produced by Stadler and is available in innumerable variants due to its modular structure. The product is exported to many countries and partly manufactured under license (Germany, Spain, France, Italy, Greece, USA). Production was discontinued due to the increasing requirements of the crash standards, as the possibilities of the GTW were exhausted. The Wink was developed as a successor.

The Spatz is a larger series of multiple units, including for the narrow-gauge Zentralbahn, and is part of the “vehicle evolution” between the GTW and the Flirt . The obvious difference is the lack of the usual drive module in the GTW, which in the Spatz is integrated in a new intermediate car.

The Flirt is the first completely redesigned vehicle family since the GTW. Although components from the latest GTW generation are still being used, the use of inflexible Jakobs bogies , which are always avoided in Swiss vehicle construction and which do not allow train separation , is completely new . The drive modules are located behind the driver's cabs during Flirt and bring the multiple unit to a speed of 160 km / h, the usual top speed in Swiss express train traffic. The FLIRT Intercity reaches a speed of 200 km / h. In addition to the SBB, for which the multiple unit was specially developed, the Flirt has customers in Germany, Italy, Hungary, Algeria and other countries.

Tango is the tram series for normal and narrow gauge.

The Wink was developed on the basis of the Flirt and is the successor to the GTW, which no longer fully complies with crash regulations. In contrast to the two-part Flirt, it is suitable for two-power drives with diesel and battery operation as well as for electrical operation with additional batteries. The addition of a middle car as in the GTW is not intended.

Brand new Stadler Flirt RABe 522 for the SBB with a shunting locomotive at the main plant in Bussnang TG.