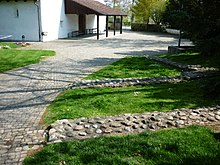 Fountain in the village center from 1833 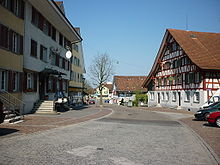 Oberwinterthur (colloquially Oberi ) is an urban district of the city of Winterthur in Switzerland . The formerly independent municipality of Oberwinterthur was incorporated in 1922 and forms today's district 2 .

The blazon reads: Divided, above in gold a striding red lion, below, sheathed in blue and silver .

The urban district of Oberwinterthur is located in the northeast of the city of Winterthur. A largely intact town center with half-timbered buildings and cobblestones forms the center of Oberwinterthur. The urban district is divided into nine quarters with very different structures. Talacker and Guggenbühl are two older residential areas with a high population density. Reutlingen, Stadel and Ricketwil were able to maintain their village character as so-called external guards . The Grüze and Hegmatten quarters are characterized by industrial buildings. The Zinzikon and Hegi districts are developing dynamically due to high construction activity.

The Oberwinterthur church hill is probably the place of the earliest settlement of the city of Winterthur. It is believed that people settled here as early as the end of the Ice Age. The hill also formed the core of the Roman settlement of Vitudurum . There was, among other things, a temple, a barracks and, according to an inscription, a Roman fort from AD 294 to protect the place from Germanic invasions. Archaeological excavations provide extensive evidence of Oberwinterthur's Roman past. The place is one of the most important archaeological sites in the canton of Zurich. Around 400 AD the Roman settlement came to an abrupt end with the withdrawal of the Romans from this area.

Until industrialization , Oberwinterthur was a simple vine-growing village for a long time. In addition to viticulture , its residents also cultivated arable land and raised livestock. In 1849 the first industrial company was established, the machine factory, cotton twisting and dyeing mill Jakob Jaeggli. Other companies followed, including a branch of the industrial group Sulzer Brothers . The establishment of industry in Oberwinterthur was favored by the newly built railway lines (1860 to Romanshorn , 1875 the Tösstalbahn and the national railway ).

The district has its own motorway exit with the Oberwinterthur exit on the A1 in the north-west. In addition, the Swiss main roads Frauenfeld-Zurich ( Hauptstrasse 1 ) and Wil-Winterthur ( Hauptstrasse 7 ) cross the district.

22% of the population are of children and youth, 65% of working age and 13% of retirement age.

Oberwinterthur has a share of 27% foreigners. The proportion of foreigners in the population varies depending on the district. Guggenbühl (34%), Grüze (31%) and Hegmatten (28%) have high rates of foreigners. Few foreigners live in the Ricketwil (4%), Stadel (12%) and Reutlingen (15%) external guards. The largest groups of migrants in Oberwinterthur come from the former Yugoslavia (5% of the resident population), Germany (5%) and Italy (4%).

Technorama , the largest science center in Switzerland and the most visited museum in the city of Winterthur, is located in Oberwinterthur .

On the last weekend of the summer school holidays, the residents of Oberwinterthur celebrate the Oberi-Fäscht . Associations and institutions offer culinary delicacies, drinks and other attractions in the historic center of Oberwinterthur.

Under the name Oberi Sounds Good , the Oberwinterthur local association is organizing a music event with renowned musicians from the styles of swing, blues, boogie woogie and New Orleans jazz.

The Church of St. Arbogast in the center of Oberwinterthur stands on the ruins of Roman thermal baths and a Gallo-Roman temple from the 2nd century AD. The church has unique wall paintings from the early 14th century. The patron saint of the today reformed church is St. Arbogast of Strasbourg.

The Hegi Castle was noble for centuries residing families. The castle houses a public museum. The castle park is freely accessible.

The Mörsburg Castle is located in the far east of Oberwinterthur. It was first mentioned in 1241. The museum in Mörsburg shows living culture of the 17th / 18th centuries. Century as well as a weapons and glass collection.

Districts of the city of Winterthur

Political communities in the Winterthur district