The title of this article is ambiguous. Further meanings are listed under Romanshorn (disambiguation) .

Romanshorn , in the Swiss German local dialect Romishorn [ˈromisˌhɔrn] , is a political municipality and a locality in the district of Arbon in the canton of Thurgau , Switzerland .

The urbanized village is located on the southern shore of Lake Constance and borders the communities of Uttwil , Hefenhofen and Salmsach .

Romanshorn has a hinterland with a large forest that has received the national Binding Prize for exemplary forest management .

The annual mean temperature is 9.3 ° C, with the coldest monthly temperatures in January at 0.4 ° C and the warmest monthly mean temperatures in July at 18.7 ° C. On average, around 83 frost days and 22 ice days are to be expected here. There are around 41 summer days on average, while there are an average of 5.6 hot days . The MeteoSwiss weather station is at an altitude of 440  m above sea level. M. in the town Güttingen , 7 kilometers northwest of Romanshorn ( straight line ).

The old parity church is still a witness of the medieval past. Romanshorn was an important “outpost” of the St. Gallen monastery for centuries.

Romanshorn was populated by novels until the end of the 7th century . Rumanishorn was first mentioned in the year 779 or 782, when Waldrata gave her property in Romanshorn to the St. Gallen monastery . In the late Middle Ages until 1367, the Vogtei Romanshorn was temporarily owned by von Landenberg . In 1455 Abbot Kaspar von Landenberg sold the land of the city ​​of St. Gallen , but the people of the church forced the sale to be judicially canceled. The court Romanshorn received in 1469 by Abbot Ulrich Roesch an opening and was the Romanshorner Office managed. Until 1798, the St. Gallen monastery held team rights, appellation and tribute - mostly in Täschlishusen near Häggenschwil . The other sovereign rights belonged to the Landgraviate of Thurgau . In 1803 the local and municipal parishes of Romanshorn were formed, which united in 1870 to form the unified municipality of Romanshorn.

In 779 a church was mentioned in Romanshorn. The people priest attested in 1275 had a benefice of 16 pounds. In 1480 St. Gallen incorporated the church, which was enlarged in 1504. In 1525 Romanshorn joined the Reformation as a whole. In 1588, the federal umbrella locations determined that the Reformed Salmsach pastor should also provide Romanshorn. Romanshorn remained a branch until the Romanshorn-Salmsach parish was formed . In 1567 the abbot installed a Catholic priest . In 1586 the Catholics received the rectory and the beneficiaries. The number of Catholics increased through further favors. In 1588 Romanshorn had two Catholic families, in 1711 36 of them. In 1829 the church was renovated. The Reformed received a new house of worship in 1911 and the Catholics in 1913, which dissolved simultaneity .

Harbor around 1860. When the north-east railway reached Romanshorn from Zurich in 1855 and a harbor was built, the place developed by leaps and bounds into a traffic junction for rail and shipping.

Aerial photo by Walter Mittelholzer from 1924

Grain, horticulture and fruit growing dominated the economy. In addition to forestry and fishing, there was also some viticulture until 1902. The steamboats that operated from 1824 docked in Romanshorn from 1832 instead of in Uttwil as before . Only when the canton of Thurgau built a port from 1840 to 1844 and the postal routes to Swabia via Romanshorn did Romanshorn begin to grow. The Zurich – Romanshorn railway line was opened in 1855 and a telegraph cable was laid through the lake in 1856 . The ferry traffic from Lindau to Romanshorn was recorded in 1869, 1945 ferries expanded and set 1976th In 1869 and 1871, respectively, the Nordostbahn took the Rorschach – Romanshorn – Konstanz line into operation. In 1910 the Bodensee-Toggenburg Railway to St. Gallen was opened. The favorable location attracted trade and industry after 1850. The Fatzer company, founded in 1836, initially produced cords and ropes. In 1895 she switched to wire rope production. In 1985 the company with 85 employees processed, among other things, 2000 tons of steel wire. From the pharmacy of Max Zeller, who sold the famous cell balm from 1864, the company Max Zeller Söhne AG developed. In 2008, the pharmaceutical company employed almost 100 people. The warehouse of the Federal Alcohol Administration opened in 1892 had a capacity of 30 million liters of alcohol by 1980. In 1904 the Voigt company was founded in Romanshorn, which in 2008 employed around 250 people and supplies pharmaceutical products to companies operating around the world. Other well-known companies include Biro (plastics), the Hydrel machine factory (including hydraulics, pneumatics) and Asco Kohlensäure AG. The canton school Romanshorn started operations in 1969. In 1970, the Thurgauisches Sprachheilheim association founded by cantonal women's associations, and since 1976 Thurgau Sprachheilschule, opened a house. Romanshorn developed into a residential community after 1945, but there were around 5300 jobs in the village in 2005, 58% of them in the third economic sector .

Until 2002 Romanshorn was a unified municipality .

The coat of arms appears for the first time in 1551 and 1581 on official discs of the Abbot of St. Gallen. 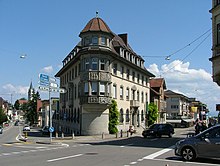 Branch of the Kantonalbank

Romanshorn was once a fishing village and with the construction of the harbor and the railway line it has become a trading and tourist center. Today Romanshorn is a modern industrial location with broad diversification: plastic products, machine industry, chemicals, pharmaceuticals etc. In around 600 companies 5000 jobs are offered. The service sector and the educational offer, for example with the cantonal school, are also of great importance. The importance of federal companies (SBB including shipping companies, then PTT and ZD) as an employer has declined significantly over the last few decades. In 2016 Romanshorn offered work for 4,352 people (converted to full-time positions). 0.9% of these were employed in agriculture and forestry, 43.4% in industry, trade and construction and 55.7% in the service sector.

The Max Zeller Söhne AG company has existed for more than 140 years and produces herbal remedies (so-called phytopreparations) with around 90 employees.

Lake Constance ferry Friedrichshafen at the pier in Romanshorn

The place is favored by its traffic situation. Romanshorn has the largest port on Lake Constance in terms of water area. A car ferry connects Romanshorn with Friedrichshafen . Trains run from Romanshorn railway station in four directions: on the lake line to Rorschach and Kreuzlingen , and also to Zurich (express train line to Brig-Glis ) and St. Gallen .

The urbanized village of Romanshorn is listed in the inventory of places worth protecting in Switzerland . The three churches are among the most important and distinctive sights:

On the south side of the harbor front are the mighty former warehouses and on the north side the old customs house (now a museum).

Autobau , a private collection of sports and racing cars , has been located in the former tank farm of the former alcohol administration since 2009 .

The multiple educational opportunities on site are particularly important. At public schools, Romanshorn offers a primary and secondary school as well as a canton school . There is also the Romanshorn Curative Education Center, the Romanshorn Music School and the Thurgau Language School. The SBW private school with the “House of Learning” and the “SBW Neue Medien AG” are also located in Romanshorn, the latter offering training as a media specialist. Thanks to its easy accessibility, Romanshorn is a central school location in Oberthurgau. The many educational opportunities on site are of particular importance, but also the wide range of leisure facilities on water and on land. A modern ice rink is just as much a part of the sporting offer as a popular seaside resort. Romanshorn is also a starting point for hikers, skaters and bikers.

The “Nations Festival” was created in 1999 during the parish council weekend of the Catholic parish of St. John. The group of foreigners, which should take care of the concerns of all nations in Romanshorn, as well as the Gruppo Culturale , which works for the preservation of the Italian values ​​and the connection to the Swiss values, were founded. The "Nations Festival" takes place every year in June. The aim of the event is: «In a cozy atmosphere, the exchange between people from different nations is to be promoted. The national representatives offer culinary specialties from their countries and an attractive stage program ».

Political communities in the Arbon district