This article deals with the city of Rorschach; for further meanings see Rorschach (disambiguation) .

Rorschach is a municipality on Lake Constance in the Swiss canton of St. Gallen .

Rorschach is the center of an agglomeration with approx. 35,000 inhabitants, but with an area of ​​1.78 km² the city itself is one of the smallest in Switzerland.

Historic aerial photo by Walter Mittelholzer between 1918 and 1937

The history of Rorschach goes back to the Alemanni . The village 850 is documented for the first time in the description of the location inter Coldahun villam et Rorscachun situm 'located between the village of Goldach and Rorschach'. The name is a formation from Old High German rōr 'pipe, reed' and scahho 'single standing wood, Schachen '.

In the year 947 King Otto gave the abbot I. Graloh from the monastery of St. Gall the market , coin and customs law to Rorschach. Around the year 1000, Rorschach was a transit point for the great pilgrimages . In 1351, the imperial estate was pledged to Hermann von Breitenlandenberg for the first time under Emperor Charles IV . After various other pledges, the abbot of St. Gallen received the permission of Emperor Friedrich III in 1464 . to redeem the deposit.

In 1597 the monthly newspaper Annus Christi (also known as Historische relatio or Rorschacher monthly magazine ) was printed in Rorschach. It is believed to be the first newspaper in the world to appear periodically and also to contain essential features of a newspaper. It was discontinued after a year - probably due to financial difficulties or a lack of reader interest (150 copies).

The Jakobskapelle , a resting place for pilgrims , stood on today's Kronenplatz . It was canceled in 1833; Jacob's fountain was built as a reminder of this . Even today the angelus bell rings twice a day .

The "Badhütte" from 1924, a three-winged bathing establishment standing on concrete pillars in the water, is the only remaining structure of its kind on the Swiss shores of Lake Constance. It was built by the architect Köpplin.

In 2009–2013 the Würth Haus Rorschach (administration and training center with congress hall and the art museum “Forum Würth”) was built by the architects Gigon / Guyer in the “New Zealand” area on Churerstrasse . Reinhold Würth opened the house on April 20, 2013.

Description: In red, a golden, strictly bound grain sheaf accompanied by a silver overturned fish on each side. The fish symbolize fishing on Lake Constance, while the corn sheaf can be seen in connection with the historic corn house .

In 2014, another fundamental vote was held on the merger of the three municipalities to form the “Stadt am See”. The aim of this vote was to give the municipal councils an order for an in-depth examination and to carry out a definitive vote on the merger within 2 years. Like the previous ones, this basic vote was clearly rejected by the communities of Goldach and Rorschacherberg and accepted by the city of Rorschach with a clear lead. As a result of this new decision, further measures for a merger were suspended and planned and partly existing collaborations by the city of Rorschach ended or put on hold.

The following secondary schools are located in Rorschach: 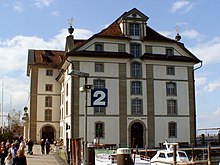 The museum in the Kornhaus at Rorschacher Hafen describes itself as an adventure museum for young and old . The exhibition spectrum ranges from prehistory, urban development, economy, industry, wildlife on Lake Constance to optics / illusion, scripts / symbols and math magic.

At the annual sand sculpture festival , invited artists of international origin build sculptures out of sand for a specified period of time on a theme that will be announced at the beginning of the festival. At the end of the festival, the best sculptures will be selected by the audience and an expert jury.

Industrialization began in Rorschach in the second half of the 19th century. The aluminum works AG Rorschach established together with Feldmühle AG (machine embroidery) and Conservenfabrik Rorschach (Roco canned products) the reputation of the industrial city.

One of the resident companies is Zollern-Mimtec AG, part of the Zollern Group .

The Frisco-Findus AG , a manufacturer of ice cream had, prior to its acquisition by Nestle based in Rorschach. The company was considered a pioneer in the field of ice cream and launched the first ice cream ( called Glace in Switzerland ) on the market in 1960 . Today, Nestle's ice cream production is concentrated in Rorschach.

The family-owned dairy Fuchs has existed since 1883 and is therefore well known throughout the country. The dairy experienced a small international distribution as a supplier to the airline caterer LSG Sky Chefs / First Catering.

Panorama of the city of Rorschach

Rorschach has a train station and the stops Rorschach Hafen and Rorschach Stadt . The former was for a long time one of the most important of the Swiss Federal Railways , but has since lost a lot of its importance. The rail connections lead on the lake line to Schaffhausen , on the express train line to St. Gallen and via St. Margrethen to Chur ; the Rorschach-Heiden-Bergbahn offers connections to Heiden .

The Rorschacher Hafen has moorings for scheduled ships of the White Fleet and is the home port of the Rorschacher passenger ships .

Rorschach does not have its own motorway connection, the next connection points are in the area of ​​the municipalities of Thal and Goldach. Clarifications are in progress for a new motorway connection for the west of the city. The aim is to bring traffic directly from Rorschach and Rorschacherberg onto the autobahn and thus relieve the town centers of Goldach and Staad.

Political communities in the constituency of Rorschach