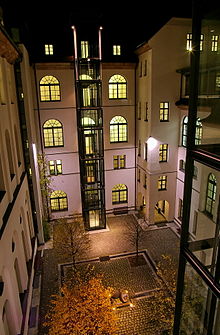 A Volkshochschule ( VHS ) is a non-profit institution for adult and further education . In the various countries, institutions of different character and with structures and objectives that differ from those of the German adult education centers can be found under this name. Contrary to their name, adult education centers are not universities in the sense of the tertiary education sector . In Germany they are assigned to the quaternary education area of continuing education.

Today, adult education centers see themselves as municipal training centers. They offer courses, individual events, compact seminars, study trips and trips as well as "education on request" in the form of so-called company or in-house courses.

As a rule, the adult education centers are financed by the six "pillars":

In addition, many teachers are not permanently employed, but are freelance workers, which is why the respective VHS does not have to pay social contributions. Since the adult education centers only have to cover part of the costs with participant fees - without making a profit - VHS courses are comparatively inexpensive and thus accessible to most sections of the population.

The courses offered by adult education centers consist of courses of various lengths, usually between 1 and 15 weeks. As a rule, it is open to everyone aged 16 and over. There are courses that are tailored to the needs of working people. Others are particularly geared towards the unemployed, housewives and pensioners or retirees. Depending on the target group and the availability of rooms, courses take place in the morning, evening or as an intensive course on the weekend. Another mainstay of the adult education centers are educational leave according to the employee training laws of the federal states . Many adult education centers carry out study trips and excursions and offer training courses for companies, associations, clubs or private individuals as contract measures.

The following subject areas are typical for the range of courses:

The Adult Education Association operates the Internet learning portal I-want-to-learn , on which users are free and anonymous - supervised by tutors - u. a. Can learn to write and read.

The forerunners of the adult education centers include the university expansion movement at the end of the 19th century, the public lecture system and the educational work of the workers' and craftsmen's education associations . The Humboldt Academy is often referred to as the first adult education center , in which from 1879 scientific results in lecture cycles were communicated in popular form to the non-academically educated citizens.

Some ideas of the original community colleges can be found today in the concepts of national universities .

Most of the foundations took place after the end of the First World War in 1918 with the aim of better educating the broader population who had previously been excluded from education. In Art. 148 of the Reich Constitution of 1919 , the promotion of education, including adult education centers, was enshrined in law for the first time. It is thanks to the initiative of Robert Ferdinand Piloty that the Würzburg Adult Education Center was established, which offered its first semester in the lecture halls of the university on November 25, 1918 and which by 1919/20 had more than 5,000 students. Herman Nohl , Heinrich Weinel and Reinhard Buchwald founded the Volkshochschule Jena at the end of 1918 , and one day after it opened there were already 2,000 enrolled students. In some cases, companies participated in the establishment of adult education centers, such as the Carl Zeiss company at the Thuringian Adult Education Center in 1919 . The Volkshochschule Essen was founded - largely at the instigation of the then Mayor of Essen and later Chancellor Hans Luther - on May 28, 1919 by the Committee for Popular Education formed by the Essen city council . In 1919 there were already more than 150 adult education centers. In 1927 the "Reich Association of German Adult Education Centers" was founded. On January 25, 1920, the "Free Adult Education Center Linden" was inaugurated as an educational institution. The management took over Ada Lessing, who held this office for 13 years until her emigration to Czechoslovakia in 1933. Theodor Lessing participated with several lecture cycles and otherwise devoted himself to his teaching duties at the Technical University of Hanover as well as his journalistic and journalistic work.

Adult education centers in their own buildings

Adult Education Centers in the Soviet Zone and the GDR

Adult education centers were established in the Soviet occupation zone (SBZ) from 1945 with the approval of the SMAD . After the founding of federal states, they were subject to them until the GDR was reorganized into districts (1952). Then they came under the jurisdiction of the Ministry of Culture . The adult education centers underwent an extensive redesign and equation with the regular schools after they moved to the Ministry of Popular Education (1956). A state “evening high school for working people” was created with the main task of enabling graduation afterwards. It was subject to a fixed curriculum that was the same for all adult education centers and issued certificates. Only in the 1970s did a cautious change back to traditional courses (foreign languages, natural sciences, also art and culture). In-company training was carried out in the state-owned companies under their own direction by company adult education centers and in technical company schools (TBS) that were later developed. Cultural and popular science offers were taken over by the Society for the Dissemination of Scientific Knowledge (later Urania ).

See also : "Adult Education Center" in the article: Education system of the GDR

The Scandinavian (home) adult education centers differ greatly in character from their counterparts in German-speaking countries. These institutions, called folkehøjskole ( Danish ), folkehøgskole ( Norwegian ), folkhögskola ( Swedish ), kansanopisto ( Finnish ) or fólkaháskúli ( Faroese ), are boarding schools with two- to twelve-month courses. The courses are aimed at adults and most of the participants are between 18 and 25 years old. The aim of these schools is to enable students to develop professionally, socially and personally. The courses offered cover a wide range of topics, such as art, craft, music, sport, philosophy, theater, photography or media. There are no exams; rather, special emphasis is placed on personal experience, experience and dialogue. The Scandinavian community colleges once corresponded to the German folk high schools . Today, however, only a few of these adult education institutions offer something similar. Comparable offers for young adults lasting several months are mostly called “long course”, “winter course” or “basic course” in Germany today.

Adult education centers in the German-speaking countries meet in Scandinavia voksenundervisning or vuxenundervisning (about: Adult Education) and partly folkeuniversitet or folkuniversitet (about: People's University). However, the latter are mostly linked to local universities.

The idea of ​​folk high schools was developed by Grundtvig in Denmark. Grundtvig was convinced that citizens could only use their newly introduced opportunities for democratic co-determination if they had “appropriate education”. He therefore worked to ensure that educational opportunities were also created for adults and that they were accessible to everyone - i.e. H. financially affordable and without selective exams - were. The first Danish adult education center was the first in the world and was opened in Rødding in Schleswig in 1844 .

The first educational institution similar to a community college existed as early as 1900 with the Université Ouvrière de Genève in Geneva. However, things only really got going in Switzerland later, namely during the time of political crisis, a year after the general strike of 1918, in the cities of Basel, Bern and Zurich. Up until the Second World War, the movement spread rapidly , especially in the canton of Zurich . A total of 36 schools were founded in the canton (today many of them are grouped under the cantonal adult education center). At the same time, only eight new community colleges were created in the rest of Switzerland, and no single one of them in the French-speaking Switzerland was created. After the Second World War, the movement finally spread to French-speaking and Italian-speaking Switzerland. Today there is a network of adult education centers throughout Switzerland.

With the initial issue date April 4, 2019 was the German Post AG , a special stamp in the denomination out of 70 euro cents. The design, entitled 100 Years of Adult Education, comes from the graphic designer Andreas Hoch from Baltmannsweiler .