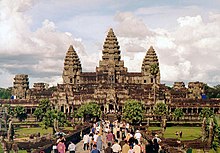 Tourists in front of the Angkor Wat in Cambodia

As cultural tourism are traveling referred to in the travelers pursue the primary objective, over elements of culture to inform the target area to experience it and to experience it. There is no generally applicable definition of cultural tourism, but typical characteristics are the travelers' interest in culture, visiting cultural institutions, participating in cultural events and providing well-founded information. The individual reason for educational, study or cultural trips is to get to know the culture in other places and to expand or deepen one's own education in other ways. Even the pilgrims can be seen as a form of cultural tourism.

Origin and meaning of the word

The term cultural tourism was coined in 1986 by Klemens Unger to distinguish it from the term study trips that had been common up until then. Unger used the term "for a type of tourism in which visitors visit objects or attend events that are developed or offered by cultural institutions in a region or city." In contrast to the study trip, entertainment, aesthetic and emotional aspects are also important.

At the German Tourism Seminar in 1988, Unger gave a lecture on the topic: "Designing offers in cultural tourism." 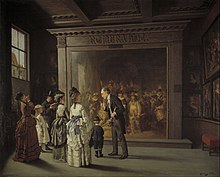 The visitors in front of Rembrandt's Night Watch in Amsterdam , genre painting by August Jernberg , 1885

An essential part of cultural tourism is the viewing of objects that are designated as sights by cultural authorities as part of the tourist development and valorisation of a region. However, from the outset, cultural tourism not only defined the individual reason for educational, study or cultural trips, but also the expanded approach, travelers in a region or place in a diverse and appealing way, far beyond the classic educational travelers with culture in emotional ones To bring contact. Today's cultural tourists as inquiring actors in cultural tourism were differentiated by Yvonne Pröbstle in 2013 into passionate specialists, knowledgeable traditionalists, open-minded explorers, entertainment-oriented day trippers and dutiful sightseers.

In view of the historically relatively new connection between culture and tourism and the difficulties in delimiting the two word components, a definition of the term 'cultural tourism' is not easy.

"Cultural tourism is a strategy and philosophy in tourism that tries to bring guests closer to cultural peculiarities, manifestations and events in a region or place and to let them come into emotional contact with it through suitable means and channels of communication."

“[Cultural tourism uses] buildings, relics and customs in the landscape, in places and buildings in order to bring the visitor closer to the cultural, social and economic development of the respective area through package deals, guided tours , sightseeing opportunities and special information material. Cultural events also often serve cultural tourism. "

Numerous tour operators specialize in cultural tourism. This type of offer for tourism is increasingly being expanded to and within European countries and for destinations outside Europe. Mostly smaller, specialized travel companies offer professionally planned trips led by trained tour guides for those interested. Foreign countries or regions that have not yet been fully developed are explored in small groups. There are study trips for almost every topic. The price is usually higher than for package tours , as the traveler receives more support and advice. Hiking trips are becoming increasingly important . An essential goal for this is ecologically sustainable tourism .

When developing a cultural tourism offer, strategic planning is of particular importance. Orientation on the supply side or on the authentic, cultural, endogenous resources of a destination promotes gentle and sustainable cultural tourism, which can be expected to generate higher returns, especially in the long term, while orientation on the demand side and the staged cultural offer on a larger one Visitor group and thus aims at high profitability in the short term. Local adult education centers offer educational and study trips in cooperation with travel agencies. Their quality is to be ensured by the quality guidelines of the umbrella association of German adult education centers.

Visiting churches, monasteries etc. is a special case. a. religious buildings and the use of pilgrimage routes by non-residents. This behavior can (and should) be marketed through forms of " spiritual tourism ". 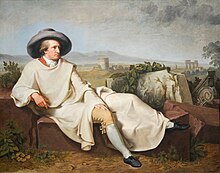 Goethe in Italy , portrait of the poet in the Campagna Romana by Johann Heinrich Wilhelm Tischbein , 1787

Cultural tourism ties in with the historically anchored institution of the Grand Tour as an educational trip . Originally, the “aspiration to educate yourself” was the primary goal of travel. Goethe's Italian journey can be mentioned here as an example . Traveling to relax and unwind did not emerge until the 19th century, when travel conditions became easier. The precursors to this are the spa trips. With the advent of mass tourism in the middle of the 20th century, the focus was also on relaxation in distant areas. The development of air traffic was the trigger.

There were always travelers whose motives were different cultures and ways of life or the nature of the host country. But competition in the tourism industry necessitated new special forms such as language and concert tours , literary tourism and cemetery tourism around the turn of the millennium . The classic form of cultural tourism is characterized by the term “authenticity”. As a counterpoint or extension to this authentic cultural tourism, “adventure” or “event tourism” is also developing. The delimitation, especially in the case of concert tours, is certainly fluid.

Educational trips of the citizens in the 18th century

Because of the reorientation of social values ​​through the ideas of the Enlightenment, citizens also began to travel. For them, however, it was no pure pleasure. Education, knowledge, strengthening the love of the country and the common good were in the foreground for this group. This type of travel can be seen as a successor to the medieval “peregrinatio academica”, ie the educational journey from university to university. She wrote reports about her travels herself. The most important destination from north of the Alps was Italy, followed by the cities of Vienna and Salzburg, which were considered particularly hospitable.

Crowds of tourists in front of the Mona Lisa in the Louvre , 2009

Cultural tourism has a great chance of development in Europe due to European history with historical traditions in a very small space. The travel destination is first of all high culture, with the increase in travelers a return to everyday culture and regionally significant destinations are discovered. The Irish Tourist Board established as early as 1988 that more than 70 percent of the attractions of cultural tourism in Europe had only been opened up in the last 20 years.

The income from tourism is an incentive for the tourist development of places, regions and countries with emphasis on their cultural characteristics and performance. Cultural tourism requires the regions as carriers of their culture; the initiative must come from these. A DTV study from 2006 confirmed that cultural tourism in Germany has great potential for growth. In particular, the demand for authentic experience of the various cultural characteristics of a region, including so-called "destination culture immersion", is growing ever stronger.

The various forms of networks play an important role in the further development of cultural tourism. A rough distinction can be made between:

Travel offers over the Internet with the option of online booking make it easier for those interested in cultural tourism to reach them. They are specifically drawn to preferred cultural locations, festivals and events. Entire regions advertise under a common name, such as fairy tale route , and series of events.

“[Cultural tourism is defined as the] careful use of cultural-historical elements and relics and the appropriate traditional, region-specific forms of living and living to increase tourism in the respective region; This with the aim of expanding and deepening the understanding of the uniqueness and intrinsic value of a region within the broad framework of a European cultural unit, through increased communication between the inhabitants of the European continent and through factually correct, comparative and discursive information about the testimonies from the past and present on site "